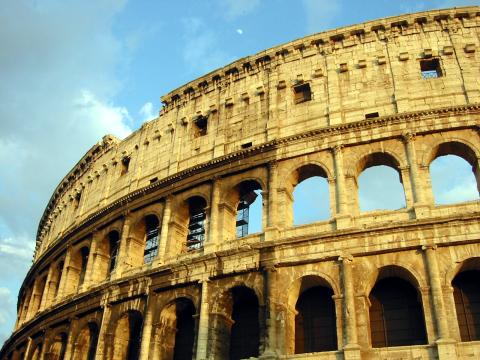 Director Ridley Scott’s Oscar-winning epic, Gladiator, is partly fictional, but the part that isn’t should serve as a reminder of some important lessons from one of history’s greatest civilizations.

In real life, there was no Roman general Maximus (played by Russell Crowe), whom the emperor Marcus Aurelius favored over his own son as his successor. But the film’s depiction of the general depravity and corruption that came to characterize the Roman Empire in its latter days is accurate and, if anything, understated.

Moreover, the evidence is strong that at the root of Rome’s decline was a shift in ideas and attitudes away from respect for life, property, free enterprise, and representative government and toward the redistributive welfare state.

When Romans abandoned self-responsibility and self-reliance and began to vote themselves benefits, use government to rob Peter to pay Paul, put their hands into other people’s pockets, and envy and covet the productive and their wealth, they set into motion Kershner’s First Law: "When a self-governing people confer upon their government the power to take from some and give to others, the process will not stop until the last bone of the last taxpayer is picked bare."

In the early days of the Roman republic, which gave way to political dictatorship with Julius Caesar’s ascendancy in 49 B.C., Roman society employed substantial elements of a market economy and a public policy that encouraged entrepreneurship. Slavery existed within Rome’s sphere of influence, but it was far more common and far more brutal in the rest of the world.

Rome made stunning progress in sanitation, transportation, the arts, public parks, banking, architecture, education, and administration. With lower taxes and lower tariffs, and more free trade and private property than anywhere else, Rome became the center of the civilized world’s wealth.

Roman roads facilitated speed of travel and communication to a degree that would not be surpassed until the development of the railroad, the steamship, and the telegraph in the nineteenth century. Roman law and justice enabled the traveler to journey throughout the empire with a considerable degree of safety.

By the fifth century A.D., the welfare state erected by successive emperors had squandered it all. In the space of a few hundred years, explains Max Shapiro in his book, The Penniless Billionaires, "the Appian Way, where Roman legions had frequently paraded in celebration of victory, was clogged with rubble and weeds. Wild dogs roamed through the ruins of the Forum, in search of food. And the 60,000 souls who inhabited the desolate place which had once been called the Eternal City now referred to it as ‘the great cow pasture.’"

Modestly at first, but with increasing generosity, tribunes, senators, and, later, emperors promised the people free wheat and other staples. In the city of Rome alone, Julius Caesar found 320,000 of its 2 million people on government grain relief.

The central government also assumed the responsibility of providing the people with entertainment. Elaborate circuses and gladiator duels were staged to keep the people happy. The equivalent of $100 million per year in the city of Rome alone is one modern historian’s estimate of what was poured out on the games.

As early as 91 A.D., the government became deeply involved in regulating agriculture. To reduce the production and raise the price of wine, Emperor Domitian ordered the destruction of half the provincial vineyards.

By the second century AD., many cities within the empire had spent themselves deeply into debt. Beginning with the emperor Hadrian, municipalities lost their independence, as the central government placed them under the jurisdiction of imperial curators. Local authority was increasingly replaced by the power of the central government.

In 274 A.D., Emperor Aurelian, wishing to provide cradle-to-grave care for the citizenry, declared that the right to relief was hereditary. Those whose parents received government benefits were entitled as a matter of right to benefits as well. Aurelian gave welfare recipients government-baked bread (instead of the old practice of giving them wheat and letting them bake their own bread) and added free salt, pork, and olive oil. Not surprisingly, the ranks of the unproductive grew fatter, and the ranks of the productive grew thinner.

In effect, the emperors were buying support with the people’s money. After all, government can give only what it first takes. The emperors, in dishing out all these goodies, were in a position to manipulate public opinion. As Alexander Hamilton observed, "Control of a man’s subsistence is control of a man’s will."

As the old virtue of self-reliance gave way to political redistribution of income, priests, teachers, and intellectuals extolled the virtues of the almighty emperor, the provider of all things. The interests of the individual were considered a distant second to the interests of the emperor and his legions. A spiritual vacuum ensued, which was filled partly by the rise of cults and Oriental religions and partly by worship of the emperor. The latter reached its zenith under Emperor Diocletian in 285 A.D. No one could approach him without prostrating himself on the ground and kissing the hem of his garment. Formerly, the proud free citizens of Rome had refused to render such servile adoration to any of their magistrates and rulers.

Civil wars and conflicts of all sorts increased as faction fought against faction to seize control of the huge state apparatus and all its public loot. Of twenty-seven emperors or would-be emperors between 180 and 285 A.D., all but two met violent deaths.

By the time of Emperor Antoninus Pius, who ruled from 138 to 161 A.D., the Roman bureaucracy was as all-embracing as that of any in modern times. A ruthless system of taxation, requisition, and compulsory labor was administered by an army of military bureaucrats. Historian W. G. Hardy wrote that, in later Rome, "what the soldiers or the barbarians spared, the emperors took in taxes." The middle class was wiped out.

Emperor Nero, best known for his role in a devastating fire, was said by contemporary historian Gaius Suetonius in De Vitae Caesarum once to have rubbed his hands together and declared, "Let us tax and tax again! Let us see to it that no one owns anything!"

Rome also suffered from the bane of all welfare states: inflation. The massive demands on the government to spend for everything created pressures for the multiplication of money. The Roman coin, the denarius, was cheapened and debased by one emperor after another. Once almost pure silver, the denarius by 268 A.D. was little more than a piece of junk, containing only .02 percent silver.

Prices skyrocketed, savings were eroded, and the people became angry and frustrated. Businessmen were often blamed for the rising prices. In the year 301, Emperor Diocletian imposed comprehensive wage and price controls.

The chaos that followed inspired the contemporary historian Lactantius to write in 314: "After the many oppressions which he put into practice had brought a general dearth upon the empire, he then set himself to regulate the prices of all vendible things. There was much bloodshed upon very slight and trifling accounts, and the people brought provisions no more to market, since they could not get a reasonable price for them; and this increased the dearth so much that at last after many had died by it, the law itself was laid aside." Rome never recovered.

Not even the act of Emperor Constantine in granting tolerance to Christians for the first time saved the decaying empire from the consequences of its disastrous economic policies. Indeed, the church itself was corrupted by joining everyone else at the public trough.

When the barbarians entered Rome in 476 A.D. and swept aside the last of the Roman emperors, Rome was a shell of its former self. The barbarians didn’t kill Rome; Romans committed economic and moral suicide.