Thoreau and "Resistance to Civil Government" 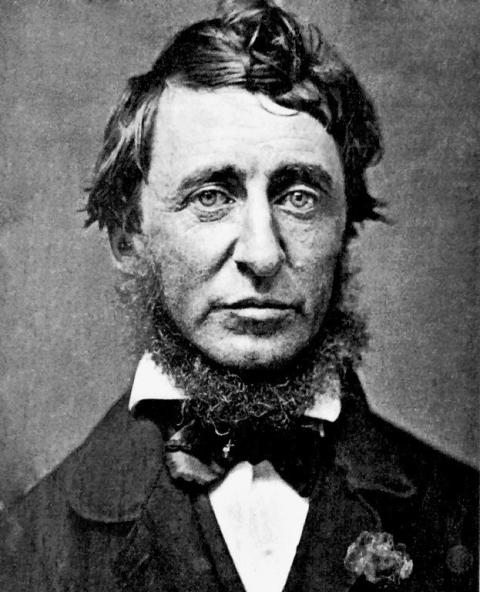 Henry David Thoreau is best known for Walden, which chronicles his experiment in simple, self-sufficient living. Less remembered, however, is that while living at Walden Pond, he was imprisoned for refusing to pay his poll tax as a statement of protest against slavery and what he saw as an unjust war with Mexico.

After someone else paid his tax, he was released, but he gave an 1848 lecture on "Resistance to Civil Government"--since published as "Civil Disobedience"--to explain his action.

While far less known than Walden, "Civil Disobedience" has arguably had much farther reaching effects. It helped inspire the Danish resistance in World War II, Gandhi in India, and tax resistors and civic protestors of all types for many decades. And it still has much to say to us today, as illustrated by the following excerpts:

The government itself, which is only the mode which the people have chosen to execute their will, is equally liable to be abused and perverted before the people can act through it.

Yet this government never of itself furthered any enterprise but by the alacrity with which it got out of its way.

The character inherent in the American people has done all that has been accomplished; and it would have done somewhat more, if the government had not sometimes got in its way. Trade and commerce, if they were not made of india-rubber, would never manage to bounce over obstacles which legislators are continually putting in their way, and if one were to judge these men wholly by the effects of their actions and not partly by their intentions, they would deserve to be classed with those most mischievious persons who put obstructions on the railroads.

After all, the practical reason why, when the power is once in the hands of the people, a majority are permitted, and for a long time continue, to rule is not because they are most likely to be in the right, nor because this seems fairest to the minority, but because they are physically the strongest.

Must the citizen ever for a moment, or in the least degree, resign his conscience to the legislator? Why has every man a conscience then? I think we should be men first, and subjects afterwards.

Law never made men a whit more just; and, by means of their respect for it, even the well-disposed are daily made the agents of injustice.

. . . most legislators . . . as they rarely make any moral distinctions, they are as likely to serve the devil, without intending it, as God.

How does it become a man to behave toward the American government today? I answer, that he cannot without disgrace be associated with it.

All men recognize the right of revolution; that is, the right to refuse allegiance to and to resist, the government, when its tyranny or its inefficiency are great and unendurable.

But when...oppression and robbery are organized, I say, let us not have such a machine [government] any longer.

Even voting for the right thing is doing nothing for it. It is only expressing to men feebly your desire that it should prevail. A wise man will not leave the right to the mercy of chance, nor wish it to prevail through the power of the majority.

If I devote myself to other pursuits and contemplations, I must first see, at least, that I do not pursue them sitting upon another man's shoulders. I must get off him first, that he may pursue his contemplations too.

Those who, while they disapprove of the character and measures of a government, yield to it their allegiance and support are undoubtedly its most conscientious supporters, and so frequently the most serious obstacles to reform.

. . . If [government injustice] is of such a nature that it requires you to be an agent of injustice to another, then, I say, break the law...What I have to do myself is to see, at any rate, that I do not lend myself to the wrong which I condemn.

A minority is powerless when it conforms to the majority.

. . . the freest of my neighbors . . . cannot spare the protection of the existing government, and they dread the consequences to their property and families of disobedience to it.

But, if I deny the authority of the state when it presents its tax bill, it will soon take and waste my property and so harass me and my children without end. This is hard. This makes it impossible for a man to live honestly, and at the same time comfortably...

Statesmen and legislators, standing so completely within the institution, never distinctly and nakedly behold it . . . all their wit and usefulness lie within certain not very wide limits.

Our legislators . . . have no genius or talent for comparatively humble questions of taxation and finance, commerce and manufactures and agriculture. If we were left solely to the wordy wit of legislators in Congress for our guidance, uncorrected by the seasonable experience and the effectual complaints of the people, America would not long retain her rank among the nations.

The authority of government . . . to be strictly just, it must have the sanction and consent of the governed. It can have no pure right over my person and property but what I concede to it.

Is a democracy, such as we know it, the last possible improvement in government? Is it not possible to take a step further towards recognizing and organizing the rights of man? There will never be a really free and enlightened State until the State comes to recognize the individual as a higher and independent power, from which all its own power and authority are derived, and treats him accordingly.

Modern Americans live lives considerably less simple than that of Thoreau on Walden Pond. But his insights in "Civil Disobedience" are, if anything, more important in our far more complex world, because that sheer complexity often disguises the sorts of foundational questions he considered about the defensible role for government in the lives and liberties of its citizens.

And with a government whose current ubiquity would amaze and appall him, there is no doubt that Thoreau would find us further from his ideals today than in the 1840s, when he wrote it.