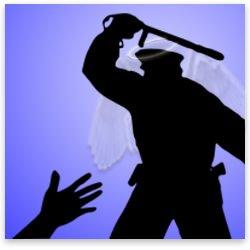 [An audio version of this article, read by Steven Ng, is available as a free MP3 download.]

Unquestioning reverence for the police is one of the more unfortunate inculcations in our formative years. If it were not for the police, lawlessness and chaos would rule; therefore, we owe our safety, our civilization, our very lives to the selflessness and dedication of the police; thus, police are our "heroes." So we were told, and so we believed.

A similar syllogism positions the police as heroes, and heroes are worthy of worship. That explains the elegiac melancholy that imbues media coverage whenever a police officer is martyred in the line of duty: to kill a cop is one of the most heinous acts one can imagine.

But is the death of a police officer really more tragic than the death of anyone else unknown to us? We can read the obituaries; we can peruse every entry, and not one will evoke a scintilla of sentiment. But if a police officer dies, an involuntary pathos percolates to the surface. The reaction is not unlike Pavlov's dog involuntarily salivating upon hearing the bell.

If we were to peer over the manufactured ethos, we would see a hard-boiled reality that differs significantly from the callow perception. Personal contacts with the police, if not confrontational, are at least disagreeable. The following scenario is familiar because it is universal: We are driving ten miles an hour over the posted interstate speed limit; weather, traffic, time preference, and common sense dictate our actions to be reasonable and nonintrusive. Suddenly, our tranquil, solitary world is shattered by a blast of swirling blue and red light emanating from a Crown Victoria drafting a few feet off our rear bumper.

The speed limit is the law, we are told. And because the law is the law, the diligent police officer is as inflexible as the law he is commissioned to enforce. All explanations — rational or otherwise — fall on the same deaf ears. The policeman remains unmoved, because he can ill afford to be moved. His municipality, and therefore his salary, depends on the additional lucre.

So we meekly sit on our hands. We were in the wrong, after all; we are a nation of laws and good government. Commonsense be damned, even when we realize that this revenue-through-punishment business model motivates an adjunct behavior: infringement enhancement. Not only are we fined for speeding; the police officer snoops around for ancillary digressions — a burned-out license-plate bulb, a cracked windshield, an unbuckled seatbelt, and, God forbid, the whiff of alcohol. The tally quickly rises into the hundreds of dollars. The police officer extends the full-fare ticket. We quietly sign off, not wanting to provoke further investigation. As we pull away, we find ourselves unsettled by a fog of ambivalence. This is the law?

Actually, there is no fog. The more right we are in our argument and the more logically we think, particularly when our actions involve no trespass against person or property, the more we bristle at submitting to impertinence and intrusion. We also resent the unsaid truth: regardless of the level of amenity the police officer effuses from the outset, he would have injured or even killed us had we not acquiesced to his demands. Though government sloganeers insist the police are there "to protect and to serve," protecting and serving are only an intemperate remark away from "to coerce and to intimidate."

The apprehension is only marginally less severe when we voluntarily contact the police to report a personal trespass. The police officer's same questioning tactic — impertinent, curt, or accusing — does little to quell our anxiety, nor does it quell the nagging thought that our property or conduct violates the letter of the law, thus inviting unintended scrutiny.

The chummy moralizing only adds to the ambivalence. The public-service announcement (featuring a crisply uniformed, avuncular B-actor sort) always favors the proliferation of laws. The law, the police officer explains in even tones, ensures a more secure and civil society. Of course, the police officer underplays the requisite fines and arrests needed to enforce the laws. The strong arm stops us from ejecting ourselves from moving vehicles, distracting ourselves while driving, idling our cars on a cold day. The fact that our infractions not only add to the municipality's revenue stream but add to the ability to further violate our person and property is an afterthought.

And as for the Brobdingnagian display of zealotry in enforcing these laws? Sure, it is off-putting to refined sensibilities, but it is merely an affectation employed to punctuate the police's dedication to maintaining order. For that reason, an alleged drug dealer's abode must be violated violently: the front door must be kicked in; the house must be entered by officers fully armored, armed, and angry; the occupants must be thrown into chaos. The alleged perpetrator, if not killed, must be wrestled to the ground and shackled, and made to endure the added humiliation of spittle and screaming invective. Afterward, the lead gendarme must pronounce to the cameras, "We are all safer now that one more criminal has been taken off the street."

Because illegal drugs are the bogeyman of middle-class morality, most applaud this aggressive imposition of the law. In fact, they wouldn't mind seeing a little more of it — hence, the overwhelming support when more police officers are promised to be added to the city payrolls. President Clinton promised to provide "funding" for 100,000 new cops and the voting majority applauded. Few stop to note that more police means more laws and stricter enforcement of the current laws. More police open the door to more coercion and more violence — from the police. But so what? It is always the other guy who is the lawbreaker — until it is you.

Consider the United States, where the citizens, for the most part, respect property. Respect for property instills an empathy and desirable ethos: most of us want to own property, and we want others to respect the property we own. In turn, we respect our neighbor's property. Contrast this behavior to parts of the world where respect for property is wanting. Mexico is an easy exemplar: the country is conspicuously marked by a superfluity of graffiti-desecrated buildings, metal-grill window coverings, class segregation, and violence and discord. Mexico also suffers from more intrusive laws (and more capricious enforcement of those laws) than the United States.

If we want to maximize social harmony, the power of the police must be minimized, while the importance of property rights must be maximized. When that occurs, any ambivalence we feel about the police will dissipate, because there will no longer be any reason to feel ambivalent.