There Will Be (Hyper)Inflation 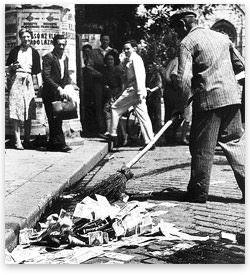 [An MP3 audio version of this article, read by Floy Lilley, is available for free download.]

In the postwar hyperinflation, banknotes were so worthless that they were discarded like trash.
(Hungary 1946)

The demise of fiat-money regimes around the world has become unmistakable. They can only be kept alive by central banks creating ever greater amounts of base money and governments underwriting commercial banks' liabilities.

The US Federal Reserve, for instance, increased the stock of the monetary base — which includes banks' demand deposits held with the Fed, plus coins and notes in circulation — from $870.9 billion in August 2008 to $1735.3 billion in January 2009.

The monetary base expands when the central bank takes over the troubled assets of commercial banks in order to extend new credit to those banks. This process is gaining momentum: on March 18, 2009, the Federal Open Market Committee (FOMC) announced that it will increase base money by purchasing another $1,150 billion of securities. It is also considering increasing base money by extending credit to private households and small businesses.

What the Fed does is produce inflation — and this is a truth that stands in sharp contrast to what mainstream economists say, namely that the rise in base money will just increase the liquidity in the interbank market and will not affect the money holdings in the hands of consumers, firms, and the government, which — they admit — could then inflate consumer prices.

In contrast, Austrian economists stress that inflation is a result of a rise in the stock of money. This viewpoint rests on sound economics, firmly rooted in the notion that, first and foremost, value is a subjective concept. Money is a good, like any other, and it is therefore subject to the law of diminishing marginal utility.

Changes in the value individuals assign to a money unit are reflected in prices for vendible items. For instance, if the money stock in the hands of an individual rises, he may wish to increase his holdings of other goods. As he exchanges money against vendible items, the prices of the latter are bid up.

In that sense, the change in the money stock is what must be called inflation, while changes in the prices for goods and services are just symptoms of the underlying cause, which is the change in the stock of money.

What the rise in base money has done so far is prevent prices of banks' security holdings to decline to free-market levels. In other words, the money injection helps to keep asset prices at artificially elevated levels, thereby preventing prices in financial markets, credit markets in particular, from adjusting.

The Path Toward Ever-Higher Inflation

The government controlled fiat-money regime is highly inflationary, as it allows for an increase in the stock of money mostly through bank credit in excess of real savings (circulation credit). The rising money stock pushes up prices — be it consumer or asset prices (such as stocks, housing, etc.).

Expanding the money stock through circulation credit sets into motion an illusionary boom, leading to malinvestment. However, the latter does not come to the surface as long as the credit and money supply keeps growing.

If money supply growth slows down all of a sudden, however, investor expectations are disappointed, and investment projects, which were — in a world of ever more money and rising prices — considered economically viable, become unprofitable.

The slowing down of money growth reveals that the production structure does not comply with actual demand, thereby unmasking the squandering of scarce resources. And so the artificial boom, induced by new money injections, turns into bust.

A policy of holding up the artificial boom would require ever-greater increases in money. Ludwig von Mises saw that this would lead to disaster:

There is no means of avoiding the final collapse of a boom brought about by credit expansion. The alternative is only whether the crisis should come sooner as the result of a voluntary abandonment of further credit expansion, or later as a final and total catastrophe of the currency system involved.[1]

In an attempt to keep credit and money supply from slowing down and the economies from going into recession, monetary policies around the world are about to push short-term interest rates towards zero and expand the stock of base money, and thereby banks' excess reserves, drastically.

Commercial banks can be expected to put their excess reserves to use, because base-money balances do not yield any interest: banks need to generate income to be in a position to pay interest on their liabilities (demand, time and savings deposits, and debentures).

Extending loans is one option. However, in an economic environment of financially overstretched borrowers, banks might be hesitant to increase their loan exposure vis-à-vis households and firms. In fact, it might be increasingly difficult for banks to do so given that equity capital has become increasingly scarce and costly.

So commercial banks may wish to monetize government debt, as the latter does not require putting equity capital to use. The government then spends the additionally created money stock on politically expedient projects (unemployment benefits, infrastructure, defense, etc.), and the money stock in the hands of households and firms rises.

If, however, commercial banks decide to refrain from additional lending, and even call in loans falling due, the government may decide — as another drastic, but logically consequential step of interventionism — to nationalize the banking industry (or at least a great part of it). By doing so, it can make the banks increase the credit and money supply.

Alternatively, the central bank could print additional money, distributing it to households and firms as a transfer payment.[2] Under a fiat-money regime, this can be done at any time and without limit, as Federal Reserve Chairman Ben S. Bernanke made unmistakably clear in a notorious speech in 2002:

[T]he U.S. government has a technology, called a printing press (or, today, its electronic equivalent), that allows it to produce as many U.S. dollars as it wishes at essentially no cost. By increasing the number of U.S. dollars in circulation, or even by credibly threatening to do so, the U.S. government can also reduce the value of a dollar in terms of goods and services, which is equivalent to raising the prices in dollars of those goods and services. We conclude that, under a paper-money system, a determined government can always generate higher spending and hence positive inflation.[3]

The Way Toward Hyperinflation

Government-controlled fiat money is fraudulent money. It is money that is created out of thin air, in violation of property rights: fiat-money production doesn't require any of the wealth-producing activities characteristic of the free market. It is and will always be, by construction, fraudulent money.

What is more, fiat money created through bank credit expansion necessarily causes boom-and-bust cycles, inducing governments to push back free-market forces to prop up the economy and keep the fiat-money regime afloat; in fact, fiat money will increasingly undermine the free-market order.

Mises was well aware of the final consequences of a monetary regime that rests on ever-greater increases in the money stock produced by banks' expanding circulation credit. It would, at some point, lead to bankruptcies on the grandest scale, resulting in a contraction of the credit and money supply (deflation).

Or it would end in hyperinflation:

But if once public opinion is convinced that the increase in the quantity of money will continue and never come to an end, and that consequently the prices of all commodities and services will not cease to rise, everybody becomes eager to buy as much as possible and to restrict his cash holding to a minimum size. For under these circumstances the regular costs incurred by holding cash are increased by the losses caused by the progressive fall in purchasing power. The advantages of holding cash must be paid for by sacrifices which are deemed unreasonably burdensome. This phenomenon was, in the great European inflations of the 'twenties, called flight into real goods (Flucht in die Sachwerte) or crack-up boom (Katastrophenhausse).[4]

Mises knew very well what he was referring to. He had lived through the period of great inflation that started in Europe in 1914 with World War I. This finally led to hyperinflation and a complete destruction of Germany's Reichsmark in 1923. On a technical level, Germany's hyperinflation was the result of the German Reichsbank monetizing the growing government debt, issued for financing social benefits, subsidies, and reparation payments.

In Age of Inflation (1979), reviewing Germany's hyperinflation from a political-economic viewpoint, Hans F. Sennholz asked, "Who would inflict on a great nation such evil which had ominous economic, social, and political ramifications not only for Germany but for the whole world?"[5] His sobering answer was that

[e]very mark was printed by Germans and issued by a central bank that was governed by Germans under a government that was purely German. It was German political parties, such as the Socialists, the Catholic Centre Party, and the Democrats, forming various coalition governments that were solely responsible for the policies they conducted. Of course, admission of responsibility for any calamity cannot be expected from any political party.[6]

That said, the German hyperinflation was the result of a policy that considered the financing of government debt by an accelerating increase in the money stock as the politically least unfavorable method. It seems that the state of opinion hasn't actually changed much. Today, there is great public support when it comes to expanding the base-money stock for financing ailing banks, insurance companies and, most important, rising government debt.

"The doctrines and theories that led to the German monetary destruction have since then caused destruction in many other countries. In fact, they may be at work right now all over the western world."[7] Austrian economics would rightly maintain that current fiat-money polices have become increasingly inflationary — and they should have little doubt that the forces and instruments that can pave the way towards hyperinflation are already in place and gaining strength by the day .

The solution to a destruction of the currency is the return to sound money — free-market money — as outlined by Mises and further developed by Murray N. Rothbard. It would presumably, at least in the initial stage, result in gold-backed money under 100% reserves. The edging up of the gold price seems to support the view that people consider gold as the ultimate means of payment — a status that will become increasingly obvious once people fear that the exchange value of fiat money will be eroded substantially.

An MP3 audio version of this article, read by Floy Lilley, is available for free download.

[2] In this context, see an overview of the Fed's blueprint for making inflation: Johnson, K., D. Small, and R. Tryon. (1999) "Monetary Policy and Price Stability."