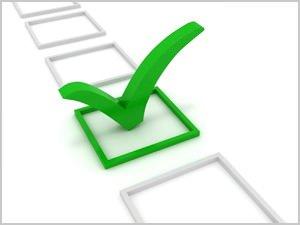 In a previous article I explained some of the major problems with a cost theory of value. In the current essay I will lay out the basics of the modern subjectivist approach to price theory and show how it is a clear improvement over the cost theory.

Although the "marginalist revolution" of the 1870s involved three independent discoveries of the concept by Léon Walras, William Stanley Jevons, and founder of the Austrian School Carl Menger, I am going to focus on price theory as it developed in the hands of the Austrians. Furthermore, I will present a modern statement of the theory, as taught in Murray Rothbard's Man, Economy, and State.

The older Austrians, like Böhm-Bawerk, who actually worked out the details of the theory, would have had different nuances and (from our perspective) may have even gone down cul-de-sacs that a modern exposition avoids. The present essay is just intended to give the basics of the modern subjectivist approach, not a history of its development.

The starting point of Austrian price theory views individuals as holding rankings of successive units of goods (and services). Austrian theory does not need to assume that individuals assign cardinal units of happiness or "utility" to various goods, but merely that they can be ranked from most to least preferred.

If we work through the numerical example of pages 107–10 of Man, Economy, and State, we can see how a modern Austrian explains market-price formation. Consider two men, Smith and Johnson. Smith currently possesses a large number of barrels of fish, while Johnson owns a horse. The following diagrams show how the two men subjectively rank various amounts of fish and the horse: 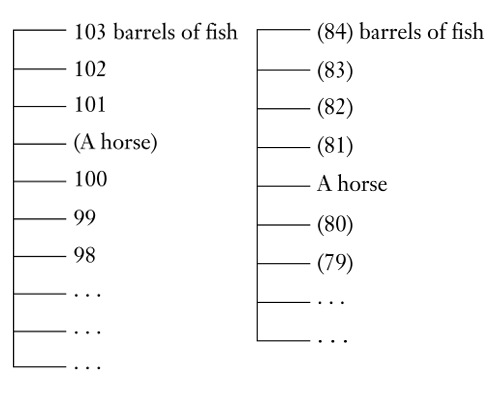 In the diagrams above, a parentheses indicates that the person doesn't own the item in question, but can imagine owning it and compare it to the other items that he actually owns. Thus we see that Smith (on the left) values 103 barrels of fish more than 102 barrels or 101 barrels. The fourth-best thing, as far as Smith is concerned, would be to have a horse (which he currently lacks). Then the next-best outcome would be to have only 100 barrels of fish, and so on.

Johnson, on the right, currently doesn't have any fish. But he considers that having 84 barrels would be the best, then having only 83, then 82 and then 81. The fifth-best outcome (of the scenarios he is considering) would be to have just a horse, which he currently possesses. Then the next-best thing would be to not have his horse, and instead to have 80 barrels of fish, etc.

Once we know how to read Rothbard's charts, we immediately see that there is a "gain from trade" to be exploited here. Because economic value is subjective, it is possible for the men to exchange some of their property and both walk away with the "more valuable" item. This would not be true for objective, intrinsic properties of goods. For example, it would be impossible for both men to walk away with the heavier object after a trade. But value is in the eye of the beholder, and hence voluntary trades are win-win activities in which both parties benefit by giving up something of lesser value in exchange for something of greater value.

From simple inspection of the preference rankings of Smith and Johnson, Rothbard says that we can't precisely pin down the exchange rate or "price" of a horse in terms of fish. Instead we can only specify a range of possible prices. What we can say is that Smith would be willing to trade at most 100 barrels of fish for a horse, while Johnson would require at least 81 barrels of fish in order to give up his horse. Therefore, if the men trade, economic analysis tells us the price of a horse will fall somewhere in the range of 81 to 100 barrels of fish. (Other considerations, such as the relative bargaining savvy of the two men, would be needed to predict the actual price.)

The zone of indeterminacy can be narrowed, however, if we introduce more people into the market, and if we make a modest assumption about the bargaining process. To demonstrate, Rothbard next introduces a third man, Brown, who (like Smith) starts out with a bunch of fish but no horse. Here are the preference rankings of the three men: 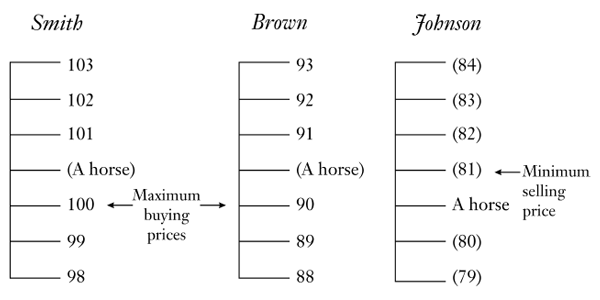 With the addition of Brown, in actual practice it's possible that Brown and Johnson would trade. After all, both men would subjectively benefit if Johnson gave Brown his horse in exchange for, say, 89 barrels of fish.

But Rothbard argues that this would not constitute an equilibrium outcome, because Smith would have objected. He could have said to Johnson, "Whoa, what are you doing? Why give your horse to Brown for a mere 89 barrels, when I will gladly give you 90?"

If we define an equilibrium price as one that none of the market participants would have an incentive to disrupt in such a manner, then the introduction of Brown has narrowed the range of possible equilibrium prices. In equilibrium, it will still be the case that Johnson trades his horse to Smith for some fish. But in order to keep Brown from upsetting the transaction with a counteroffer, the range of possible prices of a horse is now 91 to 100 barrels of fish. (Recall that the original range was the wider 81 to 100 barrels.)

As more participants are added to both the horse and fish side of the market, the zone of possible equilibrium prices continues to shrink. Eventually, it may collapse to a single point. Later in his exposition, Rothbard shows how the economist could take every person's preference rankings and construct the more familiar supply and demand curves, which intersect at this unique equilibrium price.

The Subjectivist Approach Is a Complete Theory of Price Formation

Notice that Rothbard's example was able to explain the price of a horse (in fish) without any reference to other prices in the economy. This was one of the major drawbacks of the cost theory of value. By saying (for example) that the price of a car "had to" be $10,000 because of the costs of the steel, rubber, glass, and labor that went into its construction, the cost theory of value was merely explaining one price (of a car) in relation to other prices (of steel, rubber, glass, etc.). The cost theory didn't actually explain market prices in terms of more fundamental building blocks. But Rothbard achieves precisely this with his example of the fish-and-horse market.

Also notice that Rothbard's approach can work for any type of good or service. It doesn't matter whether the horses were bred for sale or whether they were discovered the day before "for free." The subjectivist approach can therefore explain the price of Picassos as well as the price of peanut butter. In contrast, the cost theory of value at best could explain the (long-run) price of reproducible goods.

This point is particularly important in modern times when it comes to the pricing of digital goods, as Jeff Tucker recently pointed out to me. Items such as an ebook have a certain fixed cost, but virtually zero marginal cost. In other words, once paying the author for the content (and paying the overhead for the distribution network), whether the publisher sells 10 ebooks or 10 million of them, the costs of production are basically the same. In this type of setting, the modern subjectivist approach to pricing is necessary to make sense of the market, even though at first blush an ebook is a reproducible good and would seem to fall under the jurisdiction of the cost theory.

Subjectivist (Marginalist) Theory Incorporates the Truth of the Cost Theory

The modern subjectivist theory incorporates the truth of the cost theory. In other words, the limited situations in which the cost theory worked can also be handled by the subjectivist theory. In order to do this, the economist simply needs to take into account the fact of marginal utility, meaning that people make their trades using concrete units of goods rather than entire classes. (For more on marginal utility, see this article.)

For example, the cost theory of value would say that if the price of a good fell below the cost of producing it, then producers would switch to alternate lines, and the resulting shortfall in supply would raise the price. The subjectivist approach can tell the same story, because individuals will devote the first horse to more important ends than the third horse. Thus, the marginal utility of the first horse is higher than that of the third horse, and as the quantity of horses dwindles, their market price will tend to increase, using Rothbard's approach as outlined above. (This was not obvious in the actual example above, which only used one horse to keep things simple.)