A Student's Guide to Economic History 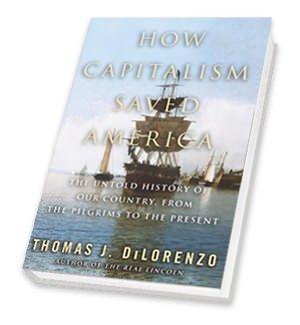 [How Capitalism Saved America: The Untold History of Our Country, From the Pilgrims to the Present. By Thomas J. DiLorenzo. Crown Forum, 2004. 295 pages.]

In the title of a famous essay written in 1906, Werner Sombart asked, Why Is There No Socialism in the United States? Whether one agrees with his analysis, his premise cannot be disputed: socialism has never enjoyed much of a following in America, except of course among intellectuals. In his vigorous and excellent defense of capitalism, Thomas DiLorenzo dispatches this group of what C.D. Broad called the "clever silly" with entirely appropriate concision.

His principal target lies elsewhere. Most opponents of capitalism profess to be its defenders. The market is fine, these opponents say, so long as the firm hand of government guides it. DiLorenzo is concerned to combat one particular variety of this malign species.

Throughout the course of American history since the Constitution was adopted, political groups have sought to yoke the free market to a program of economic nationalism and governmentally directed growth. Alexander Hamilton, Henry Clay, and Abraham Lincoln rank as major names in this tradition, and DiLorenzo discusses with great acuity the policies of these figures. (Readers of his earlier outstanding study, The Real Lincoln, will find here the essential background for his condemnation of that false friend of freedom.)1

Unfortunately, nationalist mercantilism did not die with Lincoln, and DiLorenzo shows its influence on Franklin Roosevelt, whose economic policies manifested more than a slight tinge of fascism. The opponents of capitalism, both socialists and mercantilists, ignore the fact that laissez-faire capitalism is the indispensable means to prosperity.

Why are intellectuals the glaring exception to Sombart's generalization? DiLorenzo identifies a prime motive:

Perhaps the single most important reason why the intellectual class favors socialism is that it denounces the material inequality it sees as intrinsic to a capitalist economy. The socialist intellectuals' ideal is material equality — why should some be better off financially than others? (pp. 30 – 31, emphasis in original)

DiLorenzo's response is simple and effective. The attempt to enforce equality violates human nature. The "disparities in income and standard of living in any economy reflect human nature itself … no two people are the same in terms of ambition, aptitude, intelligence, skill, and so much more" (p. 31). The natural tendency to inequality, which DiLorenzo (following Michels) terms the Iron Law of Oligarchy, by no means disappears in socialist societies. Quite the contrary, it is exacerbated, and in the countries of the Soviet bloc an elite class prospered while the masses lived in poverty.

This is of course a mild understatement. Stalin and Mao rank among the worst of the world's tyrants, a fact that DiLorenzo reminds us did not prevent Western intellectuals of great repute from fawning praise of them.

W.E.B. Du Bois … thought Stalin was a perfect gentleman who "asked for neither adulation nor vengeance. He was reasonable and conciliatory." (p. 37)

A critic of capitalism such as John Rawls might respond to our author in this way: True enough, the pursuit of equality can be carried too far, and the imperatives of human nature must always be kept in mind. But must any attempt to tame the inequalities of the market fail? Why not an egalitarian policy that respects the power of incentives? How can we ignore the philosophical arguments that mandate equality, to the greatest extent possible?

DiLorenzo does not directly address these philosophical arguments. They are not his topic, and in any case they lack merit.2 Rather, his response would, I think, reiterate his central theme. Capitalism is an immensely productive system: if left to itself, it will generate prosperity and provide goods and services that the masses demand.

The superiority of capitalism to any alternative system admits of no rational doubt. DiLorenzo appeals in this connection to evidence from various economic freedom indexes, such as the one published by the Fraser Institute in Canada. "These indexes show a strong correlation between the degree of economic freedom in a country and economic growth" (p. 24).

The connection between prosperity and capitalism is of course no recent phenomenon. From the days when the attempts at communal production in the Jamestown and Plymouth settlements led to famine and death, episodes to which DiLorenzo devotes a chapter, a simple thesis has proved true. The market works, and interference with it does not.

In relying on the manifest facts of history, DiLorenzo has not abandoned his Austrian credentials by discarding theory for a mere recital of facts and "empirical correlations," in the style of econometrics. Quite the contrary, he explains quickly and skillfully a basic point of Austrian theory. Capitalism is, in Mises's phrase, a system of "mass production for the masses." Consumer demand determines what it will be profitable to produce, and alert entrepreneurs gain at the expense of those less able to fulfill consumers' requirements.

The historical success of capitalism is no accident. Rather, follows at once from a readily graspable but incontrovertible argument.

However, this does not stop various groups from their efforts to tinker with the market. In their foolish attempts to "improve" the only workable economic system, they inevitably make matters worse.

The struggle between one such group of "improvers" and their antagonists forms a dominant theme of pre – Civil War American history. Alexander Hamilton inaugurated a program, unfortunately highly influential, in which a powerful federal government in pursuit of its own ends distorted the choices of the market. He "favored the mercantilist policies of protectionist tariffs, taxpayer subsidies for private road- and canal-building corporations, and a government-run monetary system that could finance such patronage" (p. 73).

Hamilton faced vigorous opposition from Thomas Jefferson and his many followers, who recognized the fallacies of Hamiltonian mercantilism. As DiLorenzo points out, the Jeffersonians hammered home the connection between a strong national government and mercantilism. Probably the foremost of such Jeffersonians was John Taylor; he believed that "states' rights were an indispensable tool for opposing mercantilist policies" (p. 75).

The Hamiltonians wanted a governmentally guided economy; the Jeffersonians did not. Who was right? The answer comes as no surprise. The policy of internal improvements, promoted by Henry Clay and other proponents of his American System, failed disastrously.

Starting in the late 1830s, many states subsidized the construction of canals and railroads — and the subsidies invariably turned out to be disastrous. … The failures of government-subsidized internal improvements were so pronounced that by 1860 Missouri and Massachusetts were the only two states in the union that had not yet amended their constitutions to prohibit internal improvement subsidies. (p. 88 – 91, emphasis in original)

But is not the free market inherently unable to provide such public goods as highways? DiLorenzo expertly turns aside the elaborate models of welfare economists who argue for "market failure." In numerous cases, roads and canals were built privately. The arguments for market failure resemble the supposed proof offered by Simon Newcomb, shortly before the Wright brothers' flight, that travel by air was impossible.

The manifest mistakes of the American System did not deter Abraham Lincoln from vigorous promotion of high tariffs and even more "improvements." DiLorenzo sees this as the key to Lincoln's career. Far from being a champion of human freedom, Lincoln aimed to subordinate the states to his program of economic nationalism.

The election of Abraham Lincoln was, among other things, the triumph of mercantilism in America. The American economy has featured what might be called creeping mercantilism ever since. (pp. 44 – 45)

Franklin Roosevelt proved an able student of Lincoln and the Hamiltonians, and in his case, economic nationalism bore disturbingly close parallels with fascism. DiLorenzo notes that Roosevelt's National Recovery Act "was essentially modeled after the Italian fascist system" (p. 191). Like Mussolini, Roosevelt sought to establish boards to set prices in each of the major industries. Once more, a leading politician proved unable or unwilling to accept the truth that free-market capitalism works.

Defenders of Roosevelt will counter DiLorenzo by claiming that the Great Depression forced Roosevelt's hand. How can one argue that the free market should operate unhindered when it led to disaster in 1929 and the ensuing years?

DiLorenzo easily turns aside this pernicious myth. Following Murray Rothbard's definitive America's Great Depression, he notes that Herbert Hoover's intervention in the market prevented a natural adjustment to the collapse of the artificial credit boom of the 1920s. Hoover's efforts to keep wages high insured continued mass unemployment, and Roosevelt continued his predecessor's misguided policy. After the Supreme Court, in one of its last bouts of sanity, declared the NRA unconstitutional, the floundering president put forward one foolish scheme after another, but none was able to rescue the economy from state-created chaos.

The efforts under the NRA to cartelize the economy were ironic, in view of the fact that a principal complaint against the free market since the 1890s was that it led to control of the economy by giant monopolies, whose pricing policies harmed consumers. Only small businesses, reformers alleged, could save consumers from exploitation by John D. Rockefeller of Standard Oil and other "malefactors of great wealth" like him.

DiLorenzo in earlier publications has devoted much attention to antitrust regulation, and his discussion of the issue is one of the book's best features. As one might expect from a champion of unfettered free enterprise, he contends that "monopolies," so long as they arise on the free market, serve consumers. But he has a surprise in store.

He maintains that many proponents of state regulation of monopolies realize full well that the businesses they wish to suppress satisfy market demand better than any available alternative. He quotes, e.g., from Learned Hand's Alcoa decision. Finding that the Aluminum Corporation of America had illegally monopolized virgin ingot aluminum,

Hand condemned Alcoa for its "superior skill, foresight, and industry." This was exclusionary, he said, for not all the companies in the industry shared this skill, foresight, and injury. … Worse yet, Hand said, Alcoa had correctly anticipated increases in consumer demand and then "doubled and redoubled" its capacity to fill the demand. (pp. 149 – 50)

Hand, in a fashion all-too-frequent among those who seek to correct the market, condemned a business for its virtues.

Anyone who reads How Capitalism Saved America will have a good grasp of the rudiments of American economic history. I hope that it circulates widely among college students. Those of them who master its lessons will be inoculated against all manner of ideological nonsense purveyed by their leftist professors.