The Story of Foundations of Economics 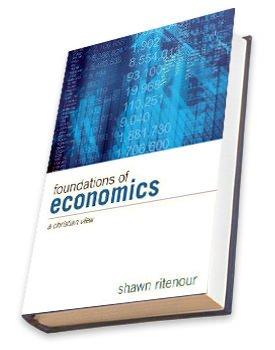 The seeds of my new book, Foundations of Economics: A Christian View, were sown at the Ludwig von Mises Institute back in the winter of 1999, which was definitely not the winter of our discontent.

A year earlier, I had been interviewed by the school newspaper at the university where I had landed my first job out of graduate school. After the usual questions, such as, "Do you like it here?" and "What courses do you teach?" the reporter asked me "So — why did you decide to become an economist?" as if she wanted to peek behind the veil so as to understand why not just me but anyone would want to pursue such a career. Without a moment's hesitation I spun my chair around, reached up to the second shelf of my relatively small bookcase, and pulled down my worn copy of Ludwig von Mises's Human Action.

That book has had an immense impact on the course of my life. As I began to read Human Action during my sophomore year in college, I had a sort of intellectual epiphany: economic theories I had learned in my college classes suddenly fell into logical place. I became convinced that economic laws are not merely plausible-sounding notions that were true only in an unrealizable ideal world, or necessary implications of arbitrary assumptions of rarified economic models. Mises showed me that economics is logically whole, and that the laws of supply and demand are rooted in the law of marginal utility, which itself is a necessary implication of the fact that human beings act purposefully.

The importance of Mises's rooting economics in the truth of Human Action is hard to overestimate. For me it made all the difference. As a Christian student being exposed to new thoughts and ideas, I wanted to make sure that economic theory could be integrated with a Christian worldview. Did economic doctrine regarding the nature of the acting person square with Christian doctrine?

Many economists in the profession give lip service to what they call "choice theory." However, they start from the rarefied and arbitrary assumptions mentioned above and proceed to do analysis as if economic agents were like the inanimate objects of physics, merely reacting to stimuli.

Mises, on the other hand, takes a radically different approach. Mises recognized that economic activity was the result of purposeful choices made by individuals: a foundation of economics that fits very nicely a Christian understanding of the nature of acting man. This is very important, because it makes studying and teaching economics more than just a job or a well-paying profession. Economics is, rather, a vocation, a worthwhile calling.

I made these same points in an address I gave in February of 1999 at the Mises Institute's "The Manifesto of Liberty" Supporters Summit, devoted to celebrating the publication of the Scholar's Edition of Mises's Human Action. The audience included, providentially, a certain successful Christian entrepreneur. This man has a heart for Christian education and for the free market. He also has a nonprofit foundation and he told me his foundation would give me a grant to help me write an introductory economics text from a Christian perspective. That is what I have tried to do with my book, Foundations of Economics.

Now, if he had come up to me and said, "Look, I have a foundation that would like to grant you a generous sum to help you write an economics text from a Christian and free-market perspective, but it has to be 564 pages long," I probably would have replied, "I'm not your guy." It was never a dream of mine to write any book, let alone an economic treatise. However, upon being approached, the book project was attractive to me, because I had not found any other book that satisfactorily integrated systematic praxeological economics with the Christian doctrines of man and creation as well as the Christian ethic of property.

"There is a great need for an introductory economics text that begins with the fundamentals of human action, develops economic principles in a way that students can understand, and then applies these principles to economic policy."

Although several principles-of-economics texts are available, most of them are very jargon-laden encyclopedic tomes, more suited for reference than for teaching students economic principles. They attempt to discuss the findings of every field of economics and usually end up being "a mile wide and an inch deep." These texts emphasize memorizing facts and definitions. However, economics involves much more than terms. It is a body of knowledge that enables people to apply fundamental principles to solve a myriad of economic problems. Therefore, the encyclopedic approach is not very useful in teaching economics.

Of the very few principles texts that do attempt to teach students the fundamentals of economics, most are merely scaled-down versions of larger texts, with a marked statist orientation. Their authors often damn the workings of the market with faint praise, but then go to great lengths to justify government intervention in the economy, especially in the sections relating to monetary and fiscal policy. There is a great need for an introductory economics text that begins with the fundamentals of human action, develops economic principles in a way that students can understand, and then applies these principles to economic policy.

Professors at Christian colleges and universities are mostly left to supplement one of the standard works with articles from an explicitly Christian perspective. Many of these materials do not advocate Biblical principles in the area of the state and economic policy but merely offer interventionism dressed up in Christian language.

In any event, I am very thankful both that I agreed to the project and that my benefactor furnished me with such generous support. I am also grateful to Grove City College for a semester-long sabbatical to help me get a major portion of the writing completed, because, once I began, the scope of the book enlarged to such an extent that there was a time when I wondered if I would ever get it done.

In Foundations of Economics, I provide a Christian justification for economics as a discipline, and show how certain relevant Christian doctrines impact both how we do economic analysis and how we analyze economic policy. Economics is important because of the cultural mandate. It is really about how humans act to solve one of mankind's greatest dilemmas: how do we fulfill our commission to work, fill, rule, and keep creation in a fallen world of aggravated scarcity without either starving to death or killing one another?

"Economics is really about how humans act to solve one of mankind's greatest dilemmas: how do we fulfill our commission to work, fill, rule, and keep creation in a fallen world of aggravated scarcity without either starving to death or killing one another?"

We begin discovering these economic laws by contemplating the nature of human beings. Scripture teaches that man is made in God's image. God thinks, plans, and acts with a purpose. As we are made in God's image, it is clear that humans act with purpose. So we can be confident in beginning with the premise that humans act. This fact implies that the best method for doing economics is praxeology, applying the laws of logical deduction to the premise that humans act. Much of this material I first presented in a paper at an Austrian Scholars Conference several years ago.

After establishing the truth of human action, I then use Rothbardian pedagogy to build economic theory step-by-step, so that the reader has an understanding of economic truth. I derive fundamental laws of human action and use them to develop laws of economics that are then applied to both microeconomic and macroeconomic issues. I have not included every jot and tittle that could be said about everything in economics, but hope to have provided a clear discussion of the most important basic economic principles. Readers see, therefore, that economics is not a set of unrelated atomistic bits of fact but a body of interrelated truth.

R.L. Dabney noted that, as creator, God is the ultimate owner of all there is, and we are His stewards. "Our property is purely a trust fund, and the whole of it is to be used for the benefit of the owner." This does not, however, imply that there is no such thing as private property. Rather it implies that God has the right to confer the use of property on whomsoever, and under whatsoever restrictions, He pleases. God reveals in Scripture that everyone has what Charles Hodge called the divine right of private property. His conclusion is based on direct Scriptural precepts against acts of theft as well as explicit commands against thoughts from which such violation proceeds.

The implication is that humans have a moral right to be free from aggression against their persons and property. Violation of this right by individuals is theft. As Francis Wayland noted, violation by the state is also theft. In my text, I apply this conclusion to issues such as confiscatory taxation, government subsidies, business regulation, and monetary inflation.

A main mission I have is to demonstrate that there is no fundamental conflict between Christian doctrine as revealed in the Bible and economic science properly conceived. Because the God who inspired the Scriptures is the same God who created the social regularities we call economic laws, they are fully consistent with each other. As recent economic events teach us, trying to achieve permanent prosperity by ignoring the economic laws that God has created is a fool's game. Likewise, violating the morality of private property has disastrous consequences.

It is my hope that thoughtful readers of my book will see a bit of the glory of God through a basic understanding of how economic law regulates the working of a market economy. Such an understanding should promote the contemplation of the beautiful way that the various interests of vast numbers of people can harmonize in peacefully fulfilling the cultural mandate. And such contemplation should, in turn, call forth doxology. As the Psalmist says, "All your works shall give thanks to you, O Lord, and all your saints shall bless you!"