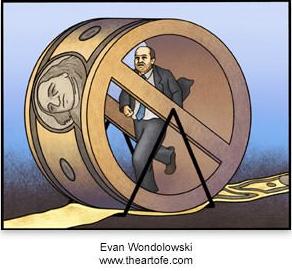 The recent improvement of the global economy, with particularly high economic-growth numbers for the United States, is just one more deception in a long series of deceptions that have plagued policy makers and investors. While official statistics register a rising gross domestic product, the long-term production potential of many economies around the world is actually contracting. The present economic expansion is brought about by massive stimulus policies. This kind of economic expansion does not constitute genuine economic growth.

It is quite common for policy makers, economic analysts, and commentators of all kinds to fail to distinguish between economic growth, which enlarges the productive capacity of an economy, and mere expansion of demand. Yet there is a huge difference between the kind of economic growth that comes as a consequence of victories in the battle against scarcity and the kind that is merely an output expansion resulting from increased spending.

The Austrian business-cycle theory emphasizes the problem of intertemporal misallocation due to monetary and fiscal stimuli. According to Austrian economic theory, stimulus packages induce the launch of projects that are bound to fail because their completion will be cut short by the lack of sustainable funding. In the short run, stimulus policies will bring an increase of the nation's gross domestic product, yet what matters for long-term economic growth is not credit-induced demand but the nation's capacity for production.

There is general agreement in the economics profession that the much-vaunted expenditure multiplier of Keynesian theory has quite different real and monetary effects depending on the state of the economy. However, the negative impact of stimulus policies on productivity is much less understood. When the economy expands due to fiscal or monetary stimulus, the productive capacity of the economy will actually decrease because the artificial expansion will mainly encourage malinvestment, i.e., the pursuit of business projects that are not viable in the long run.

It is easy indeed to fall into the trap of phony economic growth; as long as capacity utilization is below the normal level, demand expansions fueled by monetary and fiscal impulses increase economic activity. But the more the economy approaches full capacity, the more the effect on the production of real goods gets weaker and the effect on prices gets stronger. Eventually, this reaches the point when the monetary expansion only has inflationary price effects, and its impact on real production becomes nil.

When distortions in the economy are still small, and only a minor recession would be necessary to correct the misallocation, a modest amount of monetary or fiscal stimulus often will be sufficient to make the boom continue; this represents another source of deception. Central bankers and finance ministers enjoy praise for this cheap feat of having prevented what would otherwise have been only a mild and short slump. Yet by not letting mild recessions happen, these policy makers heap one pile of economic distortions upon another until the big downturn becomes unavoidable.

When finally confronted with the threat of a severe depression, these same authorities fall into panic. Acting in fear, they tend to deny experience and to flout prudence and rationality. In the face of a major economic downturn, monetary authorities resort to flooding the economy with even more easy money. Furthermore, their deficit spending heaps new debt upon old debt.

"There is a huge difference between the kind of economic growth that comes as a consequence of victories in the battle against scarcity and the kind that is merely an output expansion resulting from increased spending."

This pattern, which can be observed in many parts of the world, has also characterized US economic policy. By avoiding the small slump that most likely would have come after the stock-market crash of 1987, US monetary policy became highly expansive. It has continued that way ever since. Along the way, one bubble has followed the next, and consequently one bailout has led to the next.

After the economic dip of 2000, the US central bank's loose monetary policy laid the groundwork of the housing bubble. When the bubble burst, government implemented a series of stimulus packages, and monetary authorities set the interest rate down close at the zero bound. As of now, new packages are on their way and the Federal Reserve's reluctance to initiate its exit strategy is all too obvious.

As the collapse of the real-estate markets in the United States demonstrated, the credit boom has produced misallocations on a massive scale. The costs of many houses that were built when loans appeared easy to finance turned out to be unbearable. Projects that seemed to be financially manageable during the time of easy money had to be abandoned when the reality of scarcity was revealed. Investors and consumers were forced to retrench. Capital was lost, yet the debt burdens remain, and the fallout is felt throughout the entire economy.

As if economic history is to repeat itself, with each cycle getting worse, policy makers around the world repeat the old mistakes again and again. They have embraced, almost in unison, the rather crude belief that low interest rates and government spending will create wealth.

In the 1970s, in the face of the first oil-price shock, many governments and economists had great expectations of the stimulus policies in Europe and the United States. But the result was global stagflation. Japan practiced fiscal and monetary expansion on a grand scale since its economy entered a recession in the early 1990s, and the result has been stagnation ever since.

Despite the colossal efforts to sustain the boom in Japan, Europe, and the United States, the systemic fragilities of the global financial markets have not vanished, and business bankruptcies and unemployment are on the rise. What has been accomplished, however, is the formation of unsustainable levels of debt and of excess reserves in the banking sector, which could explode at any moment into a surge of inflation.

Fabricating bogus economic growth is highly appealing to policy makers because they can easily produce such "growth" by wasteful consumption for war, welfare, and all kinds of popular government programs. Each stimulus package at first incites irrational jubilation but leaves behind a wasteland of failed projects and frustrated expectations. This mental discouragement of investors and consumers will linger on for years after the boom has ended.

While monetary spending is limitless, and there is no scarcity of zeros to add to the price tag, production remains limited by the scarcity of the factors of production.

Fake booms and their consequent busts are directly linked to financial cycles, which in turn reflect the swings in money creation.

Fiat money lies at the heart of this process. Credit-based economic expansion and its consequent malinvestments create economic illusions.

The true tragedy of a fiat money regime is that bogus economic growth by way of monetary and fiscal stimulus can go on only until either the collapse of hyperinflation brings an end to the artificial boom or the amount of accumulated debt makes state bankruptcy inevitable.