The Spring is Silent on DDT 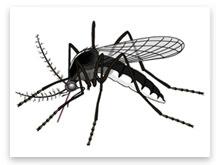 Let there be no doubt that the war on malaria has failed. It is estimated that 800,000 children in Africa die from the disease every year, and as many as three million people altogether every year.

So why has the war on malaria failed? Because governments banned the cure. Now they claim to wonder why people are sick and dying.

DDT was discovered during World War II to be a great means of stopping infection from typhus and malaria. Its inventor, Paul Hermann Mueller, won the Nobel Prize in 1948.

It was used throughout the 1950s and '60s and was on the verge of wiping out mosquito-borne diseases from the planet. Then something very peculiar came along. A book called Silent Spring by Rachel Carson was published in 1962, and it eventually created a fantastic backlash against progress. The spring was silent supposedly because of the lack of birds, all killed off by DDT.

The only problem is that Carson's claims were never scientifically validated. Indeed, it was a hoax. Studies pumped primates full of DDT with no effect. Human volunteers ingested the stuff with no effect. Workers with 600 times the typical exposure to DDT showed no increased side effects. (Some details here.) What's more, she never once mentioned in her book that DDT had saved hundreds of thousands of lives.

Even so, governments acted. First in Norway and Sweden in 1970. The United States banned it in 1972. The United Kingdom acted in 1984. The Stockholm Convention of 2001 called for the complete elimination of DDT. Of course, the United States government enforced its opposition through its foreign aid programs.

Here it is 2006 and what happens? People are stunned that malaria is back with a vengeance. Every 30 seconds, someone dies of malaria, and three-quarters of the victims are under the age of 5. Survivors can be left with insufferable mental and physical ailments. So far as I know, neither governments nor greens were ever held liable.

Today, the big bucks are looking to fix the problem. Nearly $1 billion was spent last year alone. Warren Buffett ($31 billion) and the Gates Foundation have gotten in on the act. Where is the money going? Only a tiny portion will be spent on DDT spraying, the restrictions on which are only now being slightly loosened, provided it is sprayed in homes and not on crops.

Mostly the money is going to nets. Nets! As if this were the 19th century! It's obvious that the agencies involved in this struggle are reluctant to reach for the spray can, or even discuss it.

The hidden hand behind this horror is none other than the environmentalists. The frenzy against DDT launched their movement. It is what emboldened them, and gave their political agenda momentum. In some ways, their campaign against DDT perfectly sums up their political bent: using state power to ban products and services that help humans, and thereby cause history to roll backward.

The extent to which the green movement is wrapped up in this history is obvious from the fact that we are living through a genuine silent spring, with the press ignoring the causes of malaria. The New York Times presents the epidemic as "mystifying," and most people know nothing about the role of the environmentalists who are responsible for millions of deaths by malaria, and in Africa, of all places, the continent that the Left claims to love to help.

Does no one at the New York Times read back issues? The full case is presented in the zillion-word magazine masterpiece from Tina Rosenberg "What the World Needs Now Is DDT" (April 11, 2004).

The politics of the environmentalists are increasingly predictable and obvious. They oppose all forms of capitalistic innovation. Indeed, they represent a special kind of danger to the human race that socialism never did. At least the socialists favored human progress, or at least said they did. These greens are against all that. They claim that we should be happy to live amidst disease, filth, and death, if only the bugs and birds can be left alone to thrive and kill us.

It's as if the socialists discovered that their plan creates poverty, so they decided to change their name to environmentalists and make poverty their goal.

And note how their agenda fits so well with the state agenda. The state hobbles and hinders productivity in millions of ways through its taxing, regulating, and warmongering. But that makes little difference to the state, which prefers the exercise of power to the good of society. So too do the environmentalists pursue their agenda without regard to the effects on human society.

Currently, there are many environmental issues alive in the policy world, from the debate over sprawl to the frenzy over global warming. The environmentalists have the upper hand in all of them, which is a crying shame, given that they're responsible for millions of lost lives – in just one of their conquests. More victories for them are sure to make life worse for all of us.