GET NEWS AND ARTICLES IN YOUR INBOXPrint
A
A
Home | Mises Library | Is Social Security a Ponzi Scheme?

Is Social Security a Ponzi Scheme? 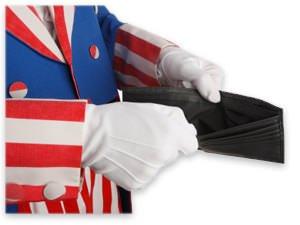 Ever since Rick Perry derided Social Security as a Ponzi scheme, economists and other pundits have jumped into the fray. Progressive blogger Matt Yglesias says it's "nuts" for anyone to talk like this, because Social Security merely relies on future economic growth — just like a private pension plan. Free-market economist Alex Tabarrok responded to Yglesias with links to arch-Keynesians (and Nobel laureates) Paul Samuelson and Paul Krugman, both comparing Social Security to a "Ponzi game."

In the present article I have three aims: First, I will point out that the critics are right; to the extent that Social Security "worked," it was because of its resemblance to a classic Ponzi scheme. Second, I will show how private-sector retirement planning operates nothing like this. Third, I will defend the good name of Charles Ponzi from the scurrilous comparisons — what he did was nothing like the racket known as Social Security.

Paul Krugman is a famous guy with a long record of strong opinions. It's to be expected that periodically these will come back to bite him. His usual tack is to deny that his old columns meant what their plain-word reading would indicate. For example, Krugman can't believe anybody thought this column (from 2002) should be construed as his endorsement of Greenspan trying to create a housing bubble.

When it comes to Social Security, here's what Krugman wrote in late 1996:

Social Security is structured from the point of view of the recipients as if it were an ordinary retirement plan: what you get out depends on what you put in. So it does not look like a redistributionist scheme. In practice it has turned out to be strongly redistributionist, but only because of its Ponzi game aspect, in which each generation takes more out than it put in. Well, the Ponzi game will soon be over, thanks to changing demographics, so that the typical recipient henceforth will get only about as much as he or she put in (and today's young may well get less than they put in).

As with his unfortunate housing-bubble article, here too Krugman has had to do damage control. After the above column floated around the Internet, Krugman tried to quell the giggling, claiming that anyone who tried to use him in support of Republican claims was playing "word games." Krugman then gave a link to this fascinating history of the original Ponzi scheme, courtesy of — the Social Security Administration! (It seems they must get this a lot.)

I was curious to see how the Social Security Administration would defend itself from the charge that it was a Ponzi scheme. Here's what they say:

In contrast to a Ponzi scheme, dependent upon an unsustainable progression, a common financial arrangement is the so-called "pay-as-you-go" system. Some private pension systems, as well as Social Security, have used this design. A pay-as-you-go system can be visualized as a pipeline, with money from current contributors coming in the front end and money to current beneficiaries paid out the back end.…

There is a superficial analogy between pyramid or Ponzi schemes and pay-as-you-go programs in that in both money from later participants goes to pay the benefits of earlier participants. But that is where the similarity ends.…

As long as the amount of money coming in the front end of the pipe maintains a rough balance with the money paid out, the system can continue forever. There is no unsustainable progression driving the mechanism of a pay-as-you-go pension system and so it is not a pyramid or Ponzi scheme.

Up until now, retirees have been taking out more than they put in, and that can't continue — this pattern relied on finding ever more workers to join the system. In other words, it was a classic Ponzi scheme. I am not here to endorse candidate Rick Perry, but the point of his charge is obviously true: each generation can't keep taking more out of the system than it put in, once the demographics change.

The SSA's pipeline graphic is interesting. If that is ultimately what Social Security turns into, and if each generation of workers merely takes out "what it originally put in," then it means workers will earn a zero-percent (real) return on their "contributions" into the system.

Yes, that would certainly be "sustainable" in an accounting sense (at least with a stable age distribution in the population), but would it work politically? If politicians frankly told voters, "When we take $1,000 from you at age 25, don't worry, that $1,000 will be waiting for you when you're 65," would they be happy with this arrangement? Charles Ponzi too could have made his scheme more sustainable if he promised his investors a 0 percent rate of return, but then nobody would have been interested.

In fairness, Matt Yglesias points out that the pipeline method can yield a positive rate of return. If the workers at the left end of the pipe always pump in, say, 15 percent of their paycheck, then (if productivity grows over time as it normally does) 50 years later, when they are on the other end of the pipe, there will be more dollars shooting out. However, in this scenario we're back to an arrangement where each generation gets out more than it put in — what Krugman himself thought was a "Ponzi game aspect." In any event, Yglesias's framework is still vulnerable to demographic shifts.

The confusion in popular discussions of Social Security partly rests on the general ignorance of how an entire community can actually become richer through saving and investment. In other words, a lot of people believe (whether or not they've really thought it through carefully) that for every Sally out there who's saving $10,000 per year, there must be some Jim who's racking up $10,000 in debt. Therefore, whenever Sally starts living off her savings, people imagine that Jim must be cutting back on his own standard of living. At the communal level — so the thinking goes — everything is a wash, and we're just changing the distribution of "total output" based on which people were frugal and which were spendthrifts.

This mindset is totally wrong. I explain things methodically in chapter 10 of my introductory textbook, but here's the gist: It's possible for everyone in the entire community to "live below his means," that is, to consume less than his income and to save. The economy is then physically capable of reducing the output of consumption goods (TVs, sports cars, steak dinners, etc.) and increasing the output of investment or capital goods (drill presses, fertilizer, MRI machines, etc.). In the future, the larger quantities of various tools and equipment make the workers more productive than they otherwise would have been. That's why the standard of living can rise; the community is physically capable of cranking out more goods and services because of the past investments.

Think of it like this: During his working career, a farmer takes some of his crop every year and uses it to buy a component for a tractor. One year he buys a tire, another year he buys a steering wheel, and so on. After working for 45 years, the farmer is ready to retire. By this point, he has assembled a brand-new tractor. Now he no longer needs to use his labor to earn an income. Instead, he rents out use of the tractor to the younger workers (who otherwise would have to use their bare hands to till the soil, etc.).

From a certain viewpoint, the retired farmer would be "skimming off the top" every time he ate an ear of corn harvested after he no longer worked the fields himself. After all, that corn would be part of that year's harvest, so if the retired farmer ate it, there would be less corn available to the people who actually picked it. Yet the retired man's consumption wouldn't be financed through a "contribution" or "redistribution" from the young workers that year.

On the contrary, those young workers would be earning their full market wage (and if they were smart, they'd be saving some of it for their own retirement). The retired farmer would buy the corn on the open market, with the income he earned from renting out his tractor. There would be more corn to go around because he had spent decades assembling the tractor, and others in his cohort had built up stockpiles of fertilizer, hoes, irrigation equipment, etc.

Obviously my tale isn't realistic, but it serves to get across the essence of voluntary retirement planning. People can get out more than they put in (measured in physical terms) because of what Böhm-Bawerk called the superior physical productivity of roundabout processes. As I complained during the debates over George W. Bush's "privatization" proposals, many supposedly pro-market reformers want to get the magic of compound interest without the discipline of saving for decades.

Above I've explained why the "Ponzi scheme" accusation is accurate, in the context of modern political debates. However, there is a very important sense in which it is unfair — unfair to Charles Ponzi.

It's true that Ponzi engaged in fraud; his victims never would have "invested" with him, had he accurately explained the business model. Libertarians therefore agree with everybody else that Charles Ponzi was a criminal and would have to face legal consequences in any just legal order.

However, so far as we know Ponzi never threatened anybody. He didn't tell struggling young workers, "Give me 15 percent of your paycheck every week, so that I can make you a fantastic return — or else I'll send goons to kidnap you."

In this respect, Social Security isn't a Ponzi scheme after all. It's more analogous to mobsters shaking down people for protection money, because otherwise "bad things could happen."

The complaints about Social Security are accurate: The only reason it has enjoyed such "success" thus far is that it relied on increasing contributions from each new generation of workers. Now that the demographics have turned against the system, it is literally unsustainable. We will see increased taxes on workers, reduced payments to beneficiaries, or some combination of the two.

In the voluntary private sector, people can plan for their own retirement through genuine saving and investment. They don't need to extract concessions from the next generation of workers, because the retirees' prior savings allow the creation of capital goods that will provide income when their bodies no longer can do so.

Finally, in one important respect a classic Ponzi scheme is less dangerous than Social Security: It relies on fooling people into voluntarily handing over their money. Once the fraud is detected, the danger is eliminated. In contrast, American workers have no choice but to "contribute" to Social Security, whether they like the deal or not.