The Social Function of Credit-Default Swaps 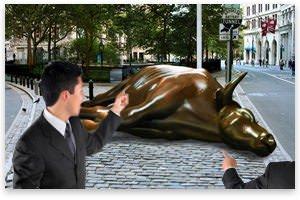 Whenever the government causes a mess, chances are high that it will accuse speculators of being responsible.1 In the recent financial crisis, speculators and their financial instruments have been under attack again. Some famous investors have even supported governments' attacks on speculators. Warren Buffet has called derivatives "financial weapons of mass destruction.

George Soros has argued in favor of a ban on naked credit-default swaps.

In the current sovereign-debt crisis that is rolling over Europe, speculators, and especially credit-default swaps, are suffering another assault. The assault has an obvious aim: governments want to shift attention and blame to speculators. But who is responsible for government debts if not governments themselves? In an attempt to find a scapegoat, the German government has banned all naked sovereign-credit-default swaps in Germany. There are plans to extend this ban to the rest of the European Union.

But what is a (naked) credit-default swap? A credit-default swap may be described as an insurance that investors buy to compensate for a loss if a particular debtor defaults on its obligation. Imagine that an investor holds a million-dollar bond issued by Citigroup. If the insurance premium (CDS spread) is 25 basis points, or 0.25 percent, the investor can insure himself against a default by paying an annual fee of 0.25 percent of one million, i.e. $2,500. CDS spreads indicate the insurance premium and the confidence in the underlying bond. If Citigroup defaults on its bond, the investor receives one million dollars in exchange for the bond.

An intriguing aspect of CDSs is that you can buy them even if you do not own any debt from the company that they refer to. These are the infamous naked credit-default swaps. By buying a CDSs on Citigroup without owning the corresponding bond, you can bet that Citigroup will default on its obligations. By just paying $2,500, a hedge fund could make a gross profit of $1,000,000 when Citigroup defaults on its obligations. From a free-market point of view, betting on defaults of financial institutions is as legitimate as betting against a certain soccer team in the World Cup. Yet, there is one important difference: in the case of financial institutions the betting can become self-validating.

For instance, investment funds bet on the downfall of Icelandic banks during the financial crisis by buying CDS on obligations of Icelandic banks.2 It was in the fund's interest to undermine people's confidence and, thereby, promote their own investments.

But why did investors start to bet against Icelandic banks in the first place? Icelandic banks were highly dependent on wholesale short-term funding. Once international liquidity evaporated, they could not roll over their short-term liabilities. Moreover, their size made them too big to be bailed out by the Icelandic government. The Icelandic financial system was the perfect target.

How could this bet then become self-validating? As the demand to buy protection on Icelandic banks increased, the price of the insurance increased in CDS markets and spreads on the banks rose. The rising spreads indicated distrust in the banks. Consequently, Icelandic banks had to pay higher interest rates on the market to attract new funds. The rising spreads spurred further demand for insurance, leading to even higher spreads, and so on until the distrust in the banks reached a point where banks could not receive further funding and failed.

"By anticipating the future, speculators may bring about events earlier and reduce their potential harm."

Due to this self-reinforcing spiral of distrust in banks and rising funding costs, people have regarded CDSs as one example of Warren Buffet's infamous financial weapons of mass destruction. Indeed, CDSs can be used to take down banks by lowering the confidence in them.

Yet, such an attack can only be successful if banks are vulnerable. Only if banks violate the golden rule of banking, i.e., if they mismatch currencies or maturities or engage in a combination of both, they become vulnerable to attacks through CDSs. Only then will the distrust spurred by higher spreads translate into funding problems that threaten a bank's liquidity.

When a bank matches maturities and currencies, holding 100-percent reserves, the attack will be unsuccessful and will not bring down the bank. In this case, speculators may ultimately suffer losses. Increased spreads may spur distrust and bring about a loss of costumers that do not roll over funds or withdraw deposits. However, a sound bank would not become illiquid or insolvent by such an attack. Only fractional reserves, mismatching of maturities, and mismatching of currencies make banks vulnerable.

CDSs are powerful corrective instruments that discipline banks. CDSs are not weapons of mass destruction but instruments of providing discipline and order. It is possible that without rising CDSs spreads, Icelandic banks would have survived longer. They would have had time to cause additional distortions and make the collapse even more disastrous.

Are the investors that trigger this downward spiral by betting on the Greek default via CDSs as harmful to society as governments suggest? Is it an illegitimate activity that should be banned? First, we have to take into account that these investors are risking their own money. There is no guarantee that they make money. They may be wrong with their expectation, and Greece's government finances will be not as bad as they expected. If they buy CDS and the spreads fall, they suffer losses.

Second, the investors perform an important social function. They warn citizens that government finances may be unsustainable. Their attack may actually increase the distrust in the capacities of government. People will be less willing to buy government bonds. They may, thereby, put a limit on further government debts. The attack may cause a government default and thereby end the excessive government spending that distorts the economy.

What would be the alternative? The alternative would be a ban on naked CDSs. Speculators would be prevented from triggering a fast default and the government could go on increasing public debts. Most probably, the increase in public debts will also cause a default; only later with more harm.

This is what speculation is all about. By anticipating the future, speculators may bring about events earlier and reduce their potential harm. Speculators anticipate a sovereign default and speculate in this direction via CDSs. Thereby, they put a limit on the reckless fiscal behavior of the government.

In sum, CDS may be used as bets that can make unsound financial institutions and reckless governments fall sooner than they otherwise would. Therefore, they are feared by governments. Yet, the ultimate cause of the collapse is the reckless behavior and not the bet against its sustainability. The bets may discipline and put, effectively, a stricter limit on reckless behavior.