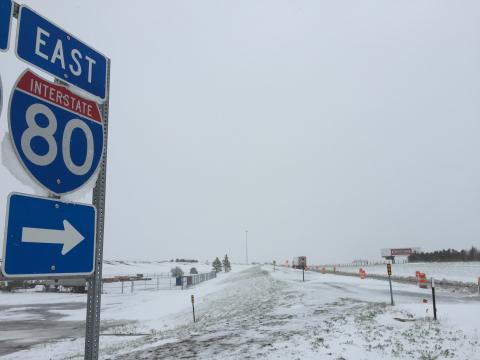 There is a slogan: "Everyone talks about the weather but no one does anything about it." It is especially true because so much of our transportation infrastructure is publicly owned.

Every winter of bad weather brings us the same scenes of bleak road and highway conditions. Spinning tires, "beached" cars the shoulder of the road, cars stuck in the median and spun-out cars, impassable roads, banks of snow interfering with traffic flow, hazards of all sorts. The economic costs are high indeed.

Northeast Ohio experienced its first significant snowfall of the fresh winter season. The snowstorm was quite a surprise; the weather reports did not indicate an oncoming snowstorm for the day. Nonetheless, the snow began falling at 11:00 a.m. and did not relent until sometime the next day. By 3:00 p.m. conditions had substantially worsened. The lake effect snow (The weather front moves across Lake Erie, picks up more moisture and dumps it on Cleveland.) became a force to reckon with on top of the gusting wind. The driving conditions were terrible; it was a white-out.

My friend Ben and I were leaving downtown Cleveland after a day of job searching in Cleveland's financial district. As we came out of the parking garage we realized just how horrendous the drive home would be. City traffic was what one would expect it to be for rush hour, slow going. Interstate traffic was another story. It was not moving. What normally would be a 45 minute drive home turned into a 90 minute drive because of the atrocious conditions of Interstates 71 and 90.

As time passed we did not see even one plow/salt truck. This prompted a discussion between my friend and I on how much better the roadways would be if they were privately owned. Obviously with privatized roads, the owners of these roads would have huge incentives to keep the roadways as clean as they possibly could during snowstorms.

The profit incentives of being able to claim that one's roadway is much safer during inclement weather than a competitor's would be tremendous. Surely word of mouth would spread through consumers on which roadways were consistently safer to travel during inclement weather. The road owner who does nothing to keep his roadways clean during snowstorms would certainly suffer large profit losses.

What seems to be the state's problem with keeping roadways clean of snow is that there simply are not enough plow/salt trucks to do all of the work. Isn't there a word for that scenario? What is it called? Ah yes, shortage! The state has a shortage of plow/salt trucks.

The process works like this: all limited access highways are taken care of first, followed by primary city streets, and in a distant third are residential streets. I say a distant third because many of these streets do not get cleaned until the middle of the night or the next day. Some people have to wait until the sun gets around to being warm enough to melt the snow. Instead, road entrepreneurs would have their own teams of plow/salt trucks and know the precise number of these vehicles to have in order to efficiently keep their roadways clean of snow and ice.

Some nonbelievers may think that privatized roads will never function as well as the current system of state owned roads. That it is impossible for the plow/salt trucks to operate efficiently to clean the roadways during rush hour because they are bogged down in traffic with the rest of the drivers.

This is true; however, the market has already devised inventions to invalidate that assertion. As my friend mentioned, some bridges are currently being installed with a system that monitors road conditions for ice and snow. When weather conditions reach a certain threshold sprinkler heads pop up from the road and spray a non-corrosive agent onto the road to melt the snow and ice. Brilliant!

The noncorrosive melting agent is currently used on select bridges in order to help keep the I-beams from rusting too quickly. Currently, the plow/salt trucks spread salt on the roadways as they drive along the road. When the salt interacts with the snow and ice it makes salt water, which then washes down over the I-beams, causing them to rust. This would be another selling point for the private road owner because his bridges would need less construction, meaning less traffic jams as a result of less construction.

Where else would this noncorrosive melting agent be useful?  I know, along the entire roadway, making those roads car-friendly as well. No more salt water washing up on cars causing premature corrosion. Every car owner who has to deal with these driving conditions knows that the salt water is harsh on the entire car, causing premature corrosion on the underbody, aluminum or chrome wheels and on the body. What a great way to attract consumers by not only having cleaner roadways, but also roadways that do not damage one's car.

To be sure, the price to travel on a road that has an electronic monitoring system of road conditions and the noncorrosive melting agent would be a premium over other private roads that use the traditional method of salt to keep the road clean. However, it is entirely the consumer's decision in his willingness to pay for more safety and less corrosion versus a road that is less clean and uses corrosive agents to aid in snow and ice removal. Surely the road owners would always be seeking new methods to keep their roads as clean and safe as possible during snowstorms in the most efficient manner.

Thus, other entrepreneurs would pursue avenues to meet the demands of road owners.

Of course the state did not invent the noncorrosive melting agent, it was the free market motivated by the profit incentive. The state has no interest in improving driving conditions in the snow and ice because the state does not have to bother with such trivial aspects as profits and losses and competition in the way private firms do. Therefore, the state does not invest in ways to improve its capital. Besides, people are conditioned to driving on treacherous roads during snowstorms; they only wish the roads could be safer to travel.

As Ben and I discussed this topic I began to realize why initially I did not think that the drive home would be so arduous. We were walking on the sidewalk to different office buildings. These buildings were not owned by the state, but rather by private firms. The owners of these buildings have an incentive to keep their walkways clear of snow and ice so that their customers do not slip, fall and break their bones or sustain a head injury.

I noticed at one building there was a team of FIVE people shoveling snow and spreading salt over an area of approximately 1,000 square feet. That's probably the same number of plow/salt trucks operating to clean the city streets of Cleveland. In all honesty, the sidewalks were cleaner than the roadways!

Unfortunately, the idea of private roadways is alien for most people; they are used to the hazardous roadways of the state. As shown though, the private market would provide safer road conditions and substantially less corrosive melting agents on the road.

Therefore, it cannot be denied that privately owned roads are surely the solution to the unsafe, corrosive roads of the state because through the private sector consumers would have more choices in which roads to use instead of the current situation of the state's horrendous roads.