The Snow Chaos at Heathrow Airport 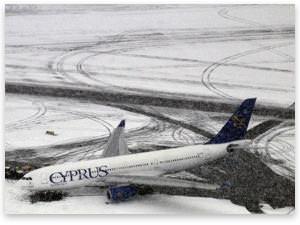 It has been interesting and sad to see in the last week that hundreds of thousands of travelers have been stranded all over the world due to heavy snow, mainly at Heathrow Airport in London.

Because of its importance as an international connection hub, Heathrow's troubles have become a worldwide air-travel catastrophe.

The unhappy crowd was often made up of people on their way to and from warmer climates, not prepared to remain in a cold location for days. Some have seen their medications run out, and of course, many holiday plans have been shattered.

BAA Ltd. is the international firm in charge of running six of the major UK airports. It also runs operations in Naples, Italy. The Mirror News wrote that "The mess at Heathrow is a symbol of a global corporate culture in which the pursuit of hard profit drives all else." It is interesting that consumer greed or government greed are never mentioned, in spite of the relentless bargain shopping on the part of travelers and the heavy taxation and regulation on the part of governments.

Of course, the state has already attacked BAA's monopoly in the past, by forcing the company to sell parts of their business to competing firms. More recently, there have been threats from the EU to further regulate airports in connection to severe weather events.

What escapes this analysis is the understanding that the only monopolies that are truly possible are the ones caused by the state, and that they are often deliberately sponsored by it. The airport industry is one of the most regulated and intervened-in sectors worldwide, and it is not uncommon for governments to own the airports outright, leasing or licensing the facilities out to favored operators. This is a blatant form of corruption under the guise of consumer protection and travel-safety advocacy.

The political and regulatory obstacles to airport construction are cash cows for campaign contributions, and they are a source of votes from NIMBY and environmentalist activists. These obstacles completely stop the market from providing sufficient service and leave consumers without choices. The entry barriers affect both large and small new projects, to the benefit of the incumbents, who see air traffic practically funneled into their facilities. But the blessings are mixed.

A megacity like London would greatly benefit from an even-larger array of different options for every wallet and taste, and from the much-needed competition that would weed out inept management teams.

A failure to promptly solve an emergency situation such as the recent heavy snowfall would instantly stain the reputation of the airport and punish management with a loss of business.

In spite of the obvious detrimental effects of the above-mentioned restrictions on competition, calls for moratoria on airport expansion are not uncommon. And the rarity of the construction of major new airports in Western, developed countries is commonly seen as a good thing.

Other regulatory hurdles relate to the pricing of the use of existing facilities. Governments typically restrict the fees airports charge air carriers to amounts they deem "fair and reasonable." But the public must learn that the level of pricing as dictated by the market plays a vital role in the rationing of a good or service.

For instance, when drinking water becomes extremely scarce because of a natural disaster, the price of bottled water at the local store increases to unthinkable levels. The government, the media, and the population view this as price gouging, but in fact the high price makes it impossible for the first shopper who comes along to buy and hoard all the water; the price rations the amount of available water. These high prices also encourage all the store owners to bring in more supply precisely where the water is needed. Eventually, the new supply of water restores balance and prices can come down again. In contrast to the natural market mechanism, a controlled low price means that no entrepreneur has any incentive to help remediate the emergency, leaving us in the hands of the likes of FEMA.

In the same way, if higher prices for terminal or runway use were allowed, they would prevent the airlines from parking too long in the terminal, for example, or from using the airport for smaller-capacity airplanes; the prices would thereby ration the available services and put them to their most efficient use. Simultaneously, these higher prices at the busier hubs would divert less-profitable business toward cheaper airports, the ones with less traffic. Eventually, if the shortage persisted and the government stayed out of the way, additional airport infrastructure would be built.

Lastly, increases in runway use are instantly interpreted by the press and public as evidence of corporate greed. So, in spite of the stellar safety record that the entire air-travel industry enjoys, governments have piled on more hurdles, limiting airport access to a certain number of takeoffs and landings per hour — thus making an increase in supply, the other tool that could have alleviated the strong demand, impossible.

With limitations such as these, the only reasonable outlet for a manager who wants to remain in business is to decrease the quality of service; so a diminished preparedness for severe weather events should surprise nobody.

Contrary to the common belief that deregulation results in widespread abuses on the part of industry, the 1978 partial deregulation of the airline industry in the United States victoriously reasserted consumer supremacy by increasing competition, brutally slashing rates, and making it very hard for inefficient carriers to survive.

Deregulating the airport industry would be no different.