GET NEWS AND ARTICLES IN YOUR INBOXPrint
A
A
Home | Mises Library | Small Is Better: A Review of Human Scale Revisited

Small Is Better: A Review of Human Scale Revisited 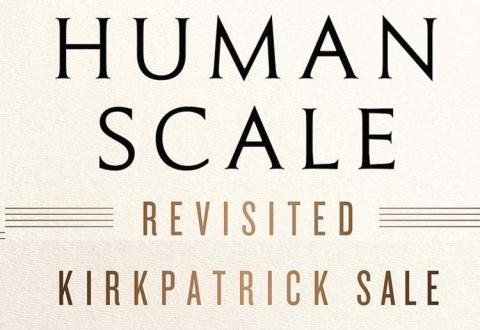 What attitude should supporters of the free market take toward decentralization? Should libertarians support the movement for Catalonian autonomy, for example, even if leaders of that movement are unfriendly to the free market? Do we have a duty to spread free-market institutions far and wide through globalization? Or, on the contrary, should we leave to their own devices communities and nations that interfere with the free market and civil liberties?

On all these questions, Kirkpatrick Sale is a useful guide. This is at first sight surprising, because he does not support the free market. To the argument of Mises and Rothbard that capitalism generates prosperity, he would shrug his shoulders. He thinks that the virtues of material prosperity are grossly overstated. In his view, life was better in the Stone Age; and he would, if he could, return us to the happy conditions that he maintains then prevailed.  When he writes about the “steady state economy” and extols environmentalism and economic self-sufficiency, we can only turn away in dismay.

Nevertheless, he has much to teach us, because he holds no illusions about the state. The state, he argues, is a destructive force; and if we must have a state, the smaller the better. “Governments, whether meaning to or not, always seem to create more havoc as they grow larger, and the largest of them historically have tended to be the most destructive and bellicose. ... Indeed, so regularly does one encounter this phenomenon in the reading of history that I am emboldened to advance this as a full-blown maxim, what we may call the Law of Government Size: Economic and social misery increases in direct proportion to the size and power of the central government of a nation or state.”

What is the evidence for this law? We cannot prove that this law must hold true, as do the laws of Austrian economics, but it is a widely repeated pattern. Sale appeals to the great English historian Arnold Toynbee: “Time after time he shows that civilizations begin to decay after they are unified and centralized under a single large-scale government, and he posits that the next-to-last stage of any society, leading directly to its collapse, ‘is its forcible political unification in a universal [by which he means united and centralized] state.’ ... There is, Toynbee concludes, ‘the slow and steady fire of a universal state where we shall in due course be reduced to dust and ashes.’” Ironically, in the face of his own studies, Toynbee was himself a supporter of world government.

Sale appeals also to another thinker, who has influenced him even more than Toynbee, the historian of cities Lewis Mumford: “Throughout history, he has shown, the consolidation of nations and the rise of governments have gone hand in hand with the development of slavery, the creation of empires, the division of citizens into classes, the recurrence of civil protests and disorders, the erection of useless monuments, the despoliation of the land, and the waging of larger and ever-larger wars.” It is again ironic that, despite his insights, Mumford vehemently denounced Charles Austin Beard for his opposition to Franklin Roosevelt’s bellicose foreign policy.

Small states, Sale argues, are much less likely to engage in war than large ones: “It is an interesting fact that when the peoples of Germany were divided into dozens of little principalities and duchies and kingdoms and sovereign cities — from about the twelfth century to the nineteenth — they engaged in fewer wars than any other peoples of Europe. ... Not that there was total peace, nothing so otherworldly as that. But there were long stretches without war, and those (mostly internecine) wars that did erupt tended not to be so intense or so lasting as those on the rest of the continent. All that changed, of course, with the unification of Germany and the establishment of one government over 25 million people and 70,000 square miles.” Readers should not fear that Sale has forgotten the Thirty Years War, the disastrous effects of which he discusses at length, but his point here is about the frequency of wars.

Sale takes the polarity between the vast centralized state and the local, self-governing community as fundamental. Small wonder that many people do not vote. Why should they, when they have not the remotest chance of affecting the outcome?

With great insight, he uses this polarity to help us understand American history. “The decentralist tradition, manifested in a persistent anti-authoritarianism and a quite exuberant localism, is basic to the American character ... resistance to unwanted laws and the flouting of colonial authority were common well before the Revolution itself, and riots and rebellions ... were recurrent. These fledgling Americans wanted to be left alone, to sink their roots how and where they pleased.”

The American Revolution only served to intensify these tendencies, and Sale in this connection cites a striking remark by Thomas Paine: “For upwards of two years from the commencement of the American War, and for a longer period in several of the American states, there were no established forms of government. The old governments had been abolished and the country was too much occupied in defense to employ its attention in establishing new governments; yet during this interval order and harmony were preserved as inviolate as in any country of Europe.”

Like Murray Rothbard, Sale supports the Articles of Confederation over the centralizing Constitution, and he is a vigorous partisan of Jefferson’s plan, unfortunately never put into effect, for small republics. “Around 1816, after having served his stint in the presidency, perhaps not wisely nor too well, he began to revive an idea that had long been part of his creed: ward government. A system of small ‘elementary republics,’ he began to feel — units of perhaps a hundred men or two populations of 500–1000 in all — was essential to the salvation of the  American state, and a better alternative than his earlier notion of recurring revolutions.”

The Civil War weakened the American decentralist tradition, but it did not destroy it altogether. “The illegal war of 1861 and its centralizing aftermath — wars are always centralizing: that’s why governments have them — brought a temporary halt to the Jeffersonian tradition and weakened the principle of states’ rights forever.”

The situation worsened in the next century. “With the first two decades of the twentieth century, the triumph of federal power was made manifest. The central government was acknowledged as supreme, its authority over its population’s pockets (the Income Tax Amendment of 1913) and habits (the Prohibition Amendment of 1919) and even lives (the Selective Service Act of 1917) fully established. ... What happened then in the 1930s and ’40s, with the familiar events of New Deal consolidation, seemed only a natural extension of the past autocracy.”

Against this centralizing trend, Sale counterposes the other term of his polarity, the self-governing local community. In particular, he admires the New England town meeting. “Here at the very beginnings  of American society, here at the fount of the American soul, we find the most developed, the most settled, the most reasonable demonstration of the worth and happiness of life without the state.”

In one of the most valuable parts of the book, Sale confronts an objection. Even if the large centralized state brings with it great evils, can human society survive without it? Sale takes as his foil the famous Yale political scientist Robert Dahl, who said, “As for making all large political systems vanish into thin air, when the silk scarf is pulled away there in full sight are matters that cannot be handled by completely autonomous communities.”

One of the foremost reasons alleged for the necessity of a large state is defense. How could a small autonomous community protect itself against the onslaught of a powerful state? As one might expect, Sale is not convinced. “Larger states, far from providing peace, merely provide larger wars, having more human and material resources to pour into them. … Moreover, in the course of attempting to provide its defense the state exercises its own forms of coercion and violence ... such a state, preoccupied with defense, begins to justify all acts, however dangerous.”

How, though, does this respond to the difficulty? However bad the large state may be, how can small communities survive without it? Sale answers in this way: “Historically the response of small states to the threat of such large-scale aggression has been temporary confederation and mutual defense, and indeed the simple threat of such unity, in the form of defense treaties and leagues and alliances, has sometimes been a sufficient deterrent. ... Moreover, the difficulties for any large power trying to subdue a host of smaller societies are truly formidable and would be additionally so if those societies, in a human-scale world, were efficiently governed, harmonious and homogeneous,  and concertedly self-protective.”

Sale has no more use for another frequent justification for the large state, the claim that people cannot provide on their own for “public goods,” such as roads, control of pollution, and education. “As with pollution, so with the other public services of the state. There is not a one of them, not one, that has not in the past been the province of the community or some agency within the community (family, church, guild) and that has been taken on by the state only because it first destroyed that province. ... Indeed, there is not one public service, not one, that could not be better supplied at the local level, where the problem is understood best and quickest.”

Not only does Sale oppose centralized control of the economy, but he also manages to sound remarkably like Mises and Rothbard in doing so. “Simply as a result of the inefficiencies and inequities of their size ... big governments tend to set in motion forces that they are unable to control, or understand, with consequences they are unable to foresee ... regardless of any other attributes, beyond a modest size a government cannot be expected  to perform optimally, and the larger it gets, and the more distended the policy, the more likely it is that it will be increasingly inefficient, autocratic, wasteful, corrupt, and harmful.”

Sale’s remarkable book, the product of wide reading in many different fields, will impress everyone who values personal liberty and rejects the Leviathan state’s endeavor to steamroller us into conformity with its maleficent plans.