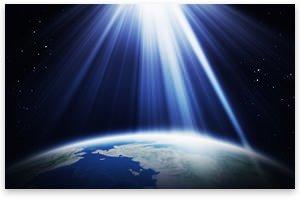 We check the main predictions of the climate models against the best and latest data. Fortunately the climate models got all their major predictions wrong. Why? Every serious skeptical scientist has been consistently saying essentially the same thing for over 20 years, yet most people have never heard the message. Here it is, put simply enough for any lay reader willing to pay attention.

What the Government Climate Scientists Say

The direct effect of CO2 is well-established physics, based on laboratory results, and known for over a century.2

Feedbacks are due to the ways the Earth reacts to the direct warming effect of the CO2. The threefold amplification by feedbacks is based on the assumption, or guess, made around 1980, that more warming due to CO2 will cause more evaporation from the oceans and that this extra water vapor will in turn lead to even more heat trapping because water vapor is the main greenhouse gas. And extra heat will cause even more evaporation, and so on. This amplification is built into all the climate models.3 The amount of amplification is estimated by assuming that nearly all the industrial-age warming is due to our CO2.

The government climate scientists and the media often tell us about the direct effect of the CO2, but rarely admit that two-thirds of their projected temperature increases are due to amplification by feedbacks.

What the Skeptics Say

The serious skeptical scientists have always agreed with the government climate scientists about the direct effect of CO2. The argument is entirely about the feedbacks.

The feedbacks dampen or reduce the direct effect of the extra CO2, cutting it roughly in half.5 The main feedbacks involve evaporation, water vapor, and clouds. In particular, water vapor condenses into clouds, so extra water vapor due to the direct warming effect of extra CO2 will cause extra clouds, which reflect sunlight back out to space and cool the earth, thereby reducing the overall warming.

There are literally thousands of feedbacks, each of which either reinforces or opposes the direct-warming effect of the extra CO2. Almost every long-lived system is governed by net feedback that dampens its response to a perturbation. If a system instead reacts to a perturbation by amplifying it, the system is likely to reach a tipping point and become unstable (like the electronic squeal that erupts when a microphone gets too close to its speakers). The earth's climate is long-lived and stable — it has never gone into runaway greenhouse, unlike Venus — which strongly suggests that the feedbacks dampen temperature perturbations such as that from extra CO2.

What the Data Says

The climate models have been essentially the same for 30 years now, maintaining roughly the same sensitivity to extra CO2 even while they got more detailed with more computer power.

One of the earliest and most important predictions was presented to the US Congress in 1988 by Dr James Hansen, the "father of global warming": 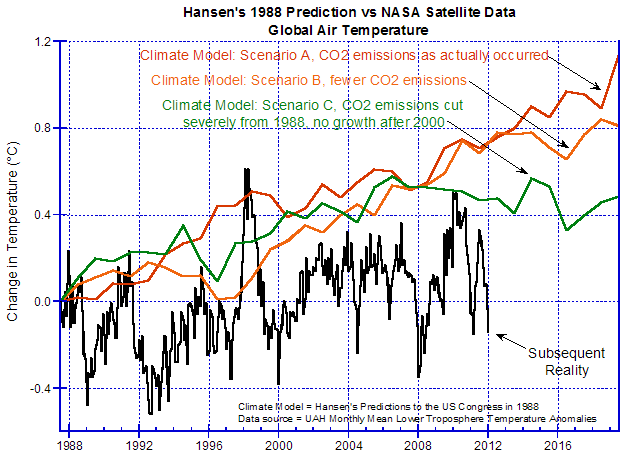 Figure 3: Hansen's predictions to the US Congress in 1988,6 compared to the subsequent temperatures as measured by NASA satellites.7

In particular, his climate model predicted that if human CO2 emissions were cut back drastically starting in 1988, such that by year 2000 the CO2 level was not rising at all, we would get his scenario C. But in reality the temperature did not even rise this much, even though our CO2 emissions strongly increased — which suggests that the climate models greatly overestimate the effect of CO2 emissions.

A more considered prediction by the climate models was made in 1990 in the IPCC's First Assessment Report:8 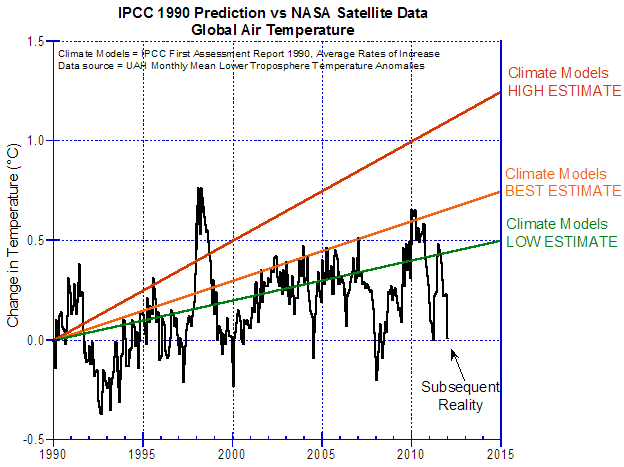 Figure 4: Predictions of the IPCC's First Assessment Report in 1990, compared to the subsequent temperatures as measured by NASA satellites.

It's 20 years now, and the average rate of increase in reality is below the lowest trend in the range predicted by the IPCC.

The oceans hold the vast bulk of the heat in the climate system. We've only been measuring ocean temperature properly since mid-2003, when the Argo system became operational.9,10 In Argo, a buoy duck dives down to a depth of 2,000 meters, measures temperatures as it very slowly ascends, then radios the results back to headquarters via satellite. Over 3,000 Argo buoys constantly patrol all the oceans of the world. 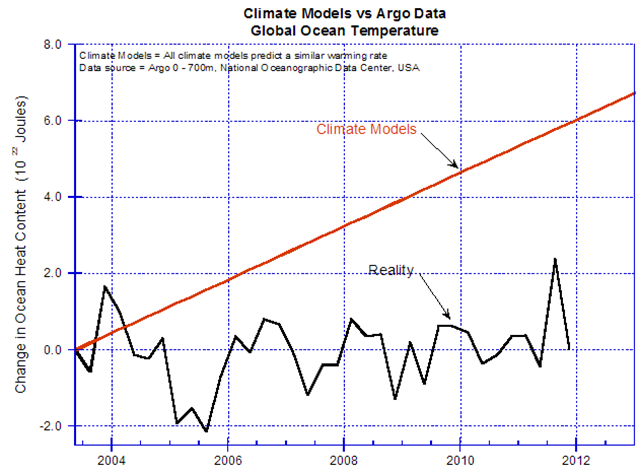 Figure 5: Climate model predictions of ocean temperature,11 versus the measurements by Argo.12 The unit of the vertical axis is 10^22 Joules (about 0.01°C).

The ocean temperature has been basically flat since we started measuring it properly, and not warming as quickly as the climate models predict.

The climate models predict a particular pattern of atmospheric warming during periods of global warming; the most prominent change they predict is a warming in the tropics about 10 km up, the "hotspot."

The hotspot is the sign of the amplification in their theory (see figure 1). The theory says the hotspot is caused by extra evaporation, and by extra water vapor pushing the warmer, wetter lower troposphere up into volume previously occupied by cool dry air. The presence of a hotspot would indicate amplification is occurring, and vice versa.

We have been measuring atmospheric temperatures with weather balloons since the 1960s. Millions of weather balloons have built up a good picture of atmospheric temperatures over the last few decades, including the warming period from the late 1970s to the late '90s. This important and pivotal data was not released publicly by the climate establishment until 2006, and then in an obscure place.13 Here it is:

The climate models predict that when the surface of the earth warms, less heat is radiated from the earth into space (on a weekly or monthly time scale). This is because, according to the theory, the warmer surface causes more evaporation and thus there is more heat-trapping water vapor. This is the heat-trapping mechanism that is responsible for the assumed amplification in figure 1.

Satellites have been measuring the radiation emitted from the earth for the last two decades. A major study has linked the changes in temperature on the earth's surface with the changes in the outgoing radiation. Here are the results: 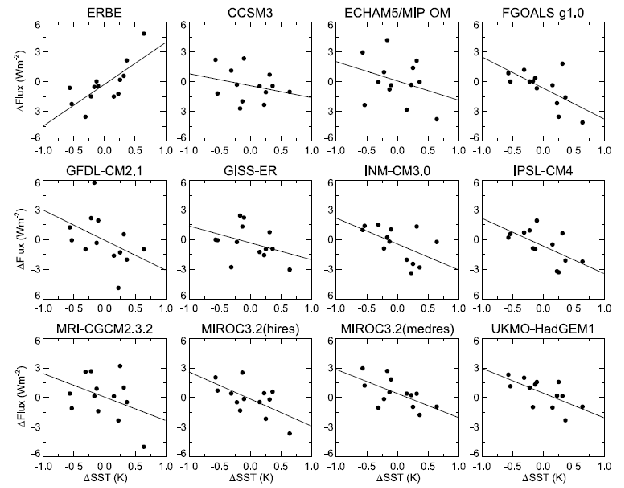 Figure 7: Outgoing radiation from earth (vertical axis) against sea-surface temperature (horizontal), as measured by the ERBE satellites (upper-left graph) and as "predicted" by 11 climate models (the other graphs).17 Notice that the slopes of the graphs for the climate models are opposite to the slope of the graph for the observed data.

All the data here is impeccably sourced — satellites, Argo, and weather balloons.18

The air and ocean temperature data shows that the climate models overestimate temperature rises. The climate establishment suggest that cooling due to undetected aerosols might be responsible for the failure of the models to date, but this excuse is wearing thin — it continues not to warm as much as they said it would, or in the way they said it would. On the other hand, the rise in air temperature has been greater than the skeptics say could be due to CO2. The skeptic's excuse is that the rise is mainly due to other forces — and they point out that the world has been in a fairly steady warming trend of 0.5°C per century since 1680 (with alternating ~30 year periods of warming and mild cooling) where as the vast bulk of all human CO2 emissions have been after 1945.

We've checked all the main predictions of the climate models against the best data:

The skeptical view is compatible with the data.

The data presented here is impeccably sourced, very relevant, publicly available, and from our best instruments. Yet it never appears in the mainstream media — have you ever seen anything like any of the figures here in the mainstream media? That alone tells you that the "debate" is about politics and power, and not about science or truth.

This is an unusual political issue, because there is a right and a wrong answer, and everyone will know which it is eventually. People are going ahead and emitting CO2 anyway, so we are doing the experiment: either the world heats up by several degrees by 2050 or so, or it doesn't.

Notice that the skeptics agree with the government climate scientists about the direct effect of CO2; they just disagree about the feedbacks. The climate debate is all about the feedbacks; everything else is merely a sideshow. Yet hardly anyone knows that. The government climate scientists and the mainstream media have framed the debate in terms of the direct effect of CO2 and sideshows such as arctic ice, bad weather, or psychology. They almost never mention the feedbacks. Why is that? Who has the power to make that happen?