GET NEWS AND ARTICLES IN YOUR INBOXPrint
A
A
Home | Mises Library | Should We Buy Only Locally Grown Produce?

Should We Buy Only Locally Grown Produce? 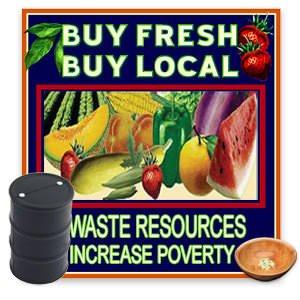 While preparing to lead a discussion of the merits of trade with first-year students last fall, I came across a depressing headline in the Wall Street Journal. At the time, the Republicans were expressing skepticism about free trade. As a signatory to a petition to protest Hoover-era trade policies (like the Smoot-Hawley Tariff), I was dismayed. The implications of a shift away from free trade are several, first for wealth creation and second for environmental conservation.

One of the "key elements" of economics is that trade creates wealth.[1] Wealth is whatever people value, but trade allows us to produce either more material goods with the same resources or the same material goods with fewer resources. While it does not profit a man to gain the world but lose his soul, trade increases our ability to produce goods and services and therefore increases our range of opportunities.

One barrier to trade is the rent-seeking activity of various interest groups. Specialization is taken to be "good" for firms in the comparatively advantaged industry, but bad for those outside that industry. In his essay "Ricardo's Difficult Idea," Paul Krugman explains the logic of comparative advantage by pointing out that wages are set in national labor markets. Thus, factors of production will flow to the industry in which returns are highest — and this will be the industry in which the area has a comparative advantage.

Suppose, for example, that we further open trade with Canada and allow more Canadian maple syrup imports while exporting more oranges. In the short run, it may well be the case that domestic syrup producers suffer some hardship, but over time, resources will flow toward production of the commodity in which Americans have a comparative advantage — in this case, oranges. Incomes will be higher: both American and Canadian workers can consume more syrup and more oranges using the same resources.

Trade here is relevant to a political and cultural movement that has been gathering steam in the United States and abroad: the movement to eat locally grown foods on the grounds that doing so conserves resources. I remember reading an article in the New York Times several years ago in which the author questioned the wisdom of shipping apricots from California when they could be grown in New York. The key buzzword here is "sustainability." The idea is that certain kinds of agriculture, particularly locally grown organic, are "sustainable" while other forms of agriculture, such as large industrial farms, are not. However, the net "carbon footprint" from an orange grown in California and shipped from Memphis is likely to be lower than the net carbon footprint from an orange grown in Memphis. Indeed, this is almost certainly the case as oranges would likely grow in Memphis only under very specific greenhouse conditions.

Since the decision to buy locally is essentially the decision to forsake comparative advantage, every unit of agricultural output will be more resource intensive than it would be under specialization, division of labor, and trade.

In other words, each additional unit of output will require more resources than it would under trade. To take a concrete example, this means that the cultivation of spinach in Memphis will require more fertilizer, more rakes, more tillers, and more hoes than the cultivation of spinach in California. Producing these implements will (again) require resources, which will require specialization and trade. We could push the problem back a step and say that we should only use locally produced implements, but we can only regress so far before we run into an obvious problem of definition (how "local" is "local"?), resource constraints (different regions have different natural endowments), and widespread destruction (denuded forests and gouged lands as people assemble locally produced stone tools for cultivation).

"Buy local" is, at its logical limit, a prescription for poverty and starvation.

This illustrates another "key element" of economics. According to Henry Hazlitt, the "art of economics" consists of tracing the effect of any policy to all groups rather than its effect on specialized interests. Buying local may be good for some local farmers and it may soothe the conscience of the social progressive, but the longer-run, hidden consequences will be undesirable and injurious.

An obvious objection is this: "why do you have to eat spinach?" Fair enough — perhaps Memphians should forsake spinach. But spinach is one of nature's healthiest foods, as I understand it. Getting the same nutrients from other sources — locally cultivated sources — would require more resources. This produces exactly the same problem. Indeed, research has shown that while higher prices of fatty foods reduce their consumption, they also result in exacerbated micronutrient deficiencies. It appears that there is indeed no free lunch.

We may be tempted at this point to throw our hands up in frustration. Calculating our individual "carbon footprint" is an intractably complex task with lots and lots of moving parts. However, if private-property rights are well defined, all of these calculations are done by the price mechanism. The long-run costs are factored into the price. The short-run costs are factored into the price. In the absence of externalities (and we will get to this in a minute), all relevant costs and benefits are factored into market prices. These prices, as well as potentially profitable opportunities, guide production and make all of the calculations for us.

Caveat: Externalities and the Price Mechanism

The key phrase in the preceding paragraph is "in the absence of externalities."

The astute reader will note that in the presence of externalities, whereby one person's actions lead to costs or benefits for others that are not reflected in the market price, the market will produce an "inefficient" allocation of resources. Environmental externalities are the classic example, and they are at the heart of the "local foods" movement. Suppose that we ship grapes from Chile on a gigantic, oil-burning ship. Since oceans are not privately owned, ocean pollution will not be reflected in the price of grapes, nor will the release of carbon into the atmosphere, which will supposedly contribute to global warming. Thus the market price will not fully reflect the costs and benefits of doing business.

Caveat to the Caveat: Transaction Costs and Political Economy

Nonetheless, the theoretical problem of externalities is not by itself sufficient to suggest that government intervention is warranted.

First, we have to consider transaction costs, which are the costs of measuring the valuable attributes of goods and services, as well as the costs of specifying and enforcing contracts. Actually measuring the damage is costly in and of itself, perhaps even more expensive than the original damage.

Second, we have to consider the political-economic ramifications. It is no secret that money buys influence in politics, and it is also no secret that environmental regulations are likely to work to the benefit of the organization with the most influence. It has been common practice for firms — often operating under the guise of consumer protection — to use government regulation as a bludgeon to reduce competition.

In other words, the costs of political solutions may well exceed the environmental benefits.

Yet Another Caveat: Good Reasons to Buy Local

There is one great reason to buy local, however: quality.

My wife and I planted tomatoes last summer, and I believe our considerable efforts yielded approximately fifteen tomatoes. Assuming that the only costs were the cost of the plants and the pots, we're coming in at over $1 per tomato. Add in the cost of our time and you end up with a figure that is considerably higher. Those were some very, very good tomatoes — but they weren't cheap.

One of the principles of economics is that trade creates wealth. However, the objection is often raised that wealth creation is not the most important thing in the world; we must consider environmental impact and all sorts of other considerations.

Often overlooked, however, is the principle that trade also conserves valuable resources.

This is part and parcel of what it means for trade to create wealth: we economize on scarce resources, which can then be used in other lines of employment. Economics is about how people face tradeoffs. In the case of trade policy, however, it is possible to "have it all," in that we can have higher economic growth, more people, and a cleaner environment.

Trade creates wealth — and trade also conserves scarce resources. The unintended consequences of policies designed to obstruct trade exacerbate the problems they are intended to solve.