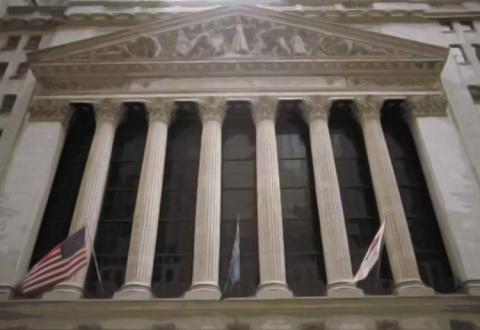 The mainstream reaction to the Bernard Madoff scandal was inevitable. Whenever a government regulatory agency proves itself to be incredibly incompetent or corrupt, the respectable media swoop in to declare that the "free market" has failed and the agency in question obviously needs more money and power.

Whether it's the Department of Education's failure to produce kids who can read, the FBI's accusations against innocent people in high-profile cases, or the FDA cracking down on tomatoes, the answer is always the same: proponents of bigger government argue that yes, mistakes were made, but the solution of course is to shovel more taxpayer money into the agencies in question.

In the private sector, when a firm fails, it ceases operations. The opposite happens in government. There is literally nothing a government agency could do that would make the talking heads on the Sunday shows ask, "Should we just abolish this agency? Is it doing more harm than good?" It's not just Fannie Mae and Freddie Mac: throughout history, virtually every agency created by the federal government has been deemed too important to fail. (I vaguely remember some Republicans in the mid-1990s holding a press conference and declaring that the Department of Commerce was done, and that voters could "stick a fork in it." I guess they found it was still pink inside.)

The pattern plays out perfectly with the SEC and the Madoff bombshell. Suppose a few years ago, I told a group of MBAs to imagine the worst screwup that the SEC could possibly perform, something so monumentally incompetent that members of Congress might openly question whether the agency should continue. I think that at least half of the class would have come up with something far less outrageous than what has happened in fact.

Everyone who reads the headlines knows that Bernard Madoff is accused of running a massive Ponzi scheme that, for over a decade, has ripped off investors to the tune of $50 billion. But those who dig a bit deeper learn that Harry Markopolos, who used to work for a Madoff rival, has been writing the SEC since at least May 1999, urging them to put a stop to Madoff's Ponzi scheme. (Markopolos examined the options markets that Madoff told investors he used to hedge his positions and yield his steady stream of dividends, and Markopolos concluded that Madoff's results were impossible.) Incredibly, the SEC apparently had evidence in front of its face sixteen years ago (in relation to another case) that Madoff was a crook.

Yet it gets worse. As the Wall Street Journal and others dig into the story, they find that Madoff's family had close ties to the SEC. His sons, brother, and niece, for example, worked with or advised financial regulators on certain matters—no doubt telling them the best way to protect investors from fraud.

But the pièce de résistance is that Madoff wasn't caught; his own sons turned him in after he came to them and admitted what he'd done. (Let's assume they are telling the truth and didn't realize what their father was up to all along.) And even Madoff's confession was not because of a visit from the ghost of Christmas future. No, Madoff's scheme simply ran out of gas, because of large redemption claims that his clients filed, due to the collapse of the financial markets. Had it not been for the bursting of the credit bubble, Madoff would likely still be bilking new investors — and advising the SEC.

Even though George Bush has presided over the most interventionist government since FDR's New Deal, he somehow has a reputation for being a free marketeer. (It's funny that his political opponents take him at his word when it comes to economic rhetoric, yet they don't universally refer to Bush as a lover of world democracy and peace.) Naturally, the Madoff Ponzi scheme is blamed on the Bush administration's failure to adequately fund and staff the beleaguered SEC. "Bush thinks markets are self-regulating, and look what happened!"

This is complete balderdash. The SEC under George Bush has the biggest budget and the most personnel in its history. The charts below show the annual budgets and "full-time-equivalent" staff for the SEC by fiscal year. These numbers were obtained from the annual SEC reports archived here. (Note that there might be a slight discontinuity in the budget series in the year 2003, when the report format changed.) 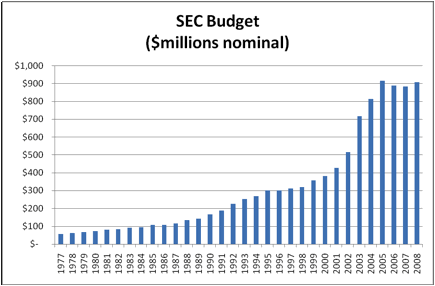 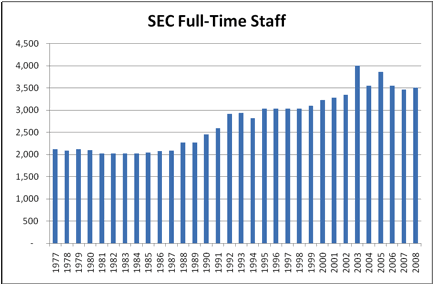 It's even more interesting to break down the growth rates in budget and staff by presidential administration. For the following table, I have assumed that an incoming president doesn't really influence the SEC's operations for that (partial) fiscal year. For example, Ronald Reagan won the election in November 1980, and was sworn in the following January 1981. To gauge how much he increased the SEC budget and staff, I look at the annualized growth from FY 1981 (which ran through September 1981) to FY 1989. However, I also ran the numbers going from FY 1980 through FY 1988 etc., and it doesn't really affect the results.

As the table shows, clearly the person who hated the free-wheeling market most was the first President Bush, followed up by his son. And especially when we consider the high inflation rate, it's obvious that Jimmy Carter was a laissez-faire ideologue. Bill Clinton, in contrast, had the same attitude towards speculators as Ronald Reagan.

Naturally we can quibble with these conclusions. Maybe Bill Clinton's numbers would have been a lot higher had Newt Gingrich remained a history professor. Maybe George W. Bush used the Enron scandal to beef up the SEC's budget, while he gave orders behind the scenes to use the cash for pizza and beer rather than enforcement.

But whatever the excuse, it just proves my point: it is foolish to give the task of ensuring financial integrity to DC politicians. The SEC was supposedly retooled after the Enron fiasco in order to do its job. And it failed miserably. Some heads may roll and budgets balloon, but if history is any guide, there will be another huge financial fraud within another decade.

The SEC clearly botched its alleged job in the case of the Madoff Ponzi scheme. Taxpayers are certainly entitled to ask, "What exactly are we getting for our (now) $900 million per year?"

It is not simply that the SEC failed to help. On the contrary, the SEC is actively harmful. For one thing, its implicit blessing of Madoff probably reassured some investors; surely the SEC would have shut him down if his returns were bogus! Beyond that, the SEC has been horrible during the financial crisis. In the summer it engaged in a phony ban on "naked" short selling that was already illegal, and then a few months later it banned short selling outright on hundreds of financial stocks, a move that paralyzed that particular sector even more. And lately, they've decided to launch a witch hunt on Mark Cuban—those 3,000+ employees have to do something.

Democrats should not take away from the Madoff scandal the lesson that Republicans cannot be trusted to regulate financial markets. Even if it were true that Democrats would run it more honorably and competently, eventually another Republican will win the White House.

Rather than pitting each party against the other, it is wiser to conclude that Washington politicians and bureaucrats will never put the average taxpayer or investor's interests above those of billionaire financiers. The SEC should be abolished, and investors should rely on private-sector watchdog groups to spot swindlers.