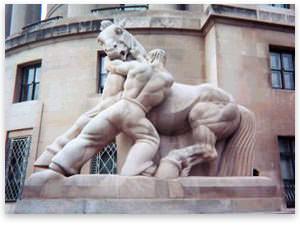 Editor's Note: Business scandals often lead to calls for greater regulation. Yet, as economist Mark Thornton shows, in so many recent scandals, regulators have been among the chief culprits.

The Democratic Party had its message on the economy well-prepared for the recent election. From President Obama to his campaign directors to campaign advisor-hacks, all the way down to the local party patsies, the message was uniform and well rehearsed. “We do not want to return to the failed economic policies of four years ago. Those policies caused the economic crisis that almost put the country back in a great depression. We cannot return to the naïve policy that deregulation is good for the economy.

The Romney campaign essentially left this crucial talking point unchallenged. When confronted with this charge from the Obama campaign, Romney’s response was to concede that capitalism requires regulation to work, but to insist that the regulation cannot be excessive and burdensome, or ultimately the consumer will be hurt.

This is an entirely unsatisfactory response. The problem is that Romney and his campaign do not really know how capitalism works. They do have some idea of how the actual interventionist economy works. That is the economy where Romney made all his money. However, it is not a platform from which you can see how an economy works without interventions, regulations, and “favorable” injections from the Federal Reserve. Romney made his money during a time of “easy money” under Alan Greenspan.

What the Democratic spin boils down to is that a lack of regulation allows greed and irrational behavior to destroy the economy and hurt consumers.

This simply is not true. When you look at the cases where this was supposed to exist, you find the Democratic party spin is wrong. Regulations do not make markets safer, more efficient, or work better for consumers in anything but a superficial sense. Regulation only provides “confidence” and assurance that only leads to crisis. Regulation does not produce harmonization of markets or insurance for consumers.

The Bernie Madoff scandal involved Madoff’s tightly controlled firm taking client money and supposedly generating spectacular and consistent investment returns. However, Madoff was not really a great investor; he was running a Ponzi scheme where he used investors’ money to pay for redemptions by his clients. Most of the money apparently went into his own pockets.

First, how did he get away with this scheme for so long? It was not because he was unregulated. He was officially under the scrutiny of the Securities and Exchange Commission (SEC), the Financial Industry Regulatory Authority, and probably other government regulatory agencies. Despite ever-increasing budgets and staff, and even warnings from outsiders, the SEC failed to act.

Second, how did he finally get caught? He was only caught after the stock market crashed and investors sought to redeem large amounts of their funds. He confessed to his sons that he was operating a Ponzi scheme and his sons turned him into authorities.1

If the stock market had not crashed, Madoff might still be celebrated as a genius investor. Many said that Madoff’s investment returns were too good to be true. Experts agreed that they could not be true, and still the SEC failed to act. The fact that he was licensed and regulated by the government gave investors in his firm “confidence” that Madoff’s investment strategy was truly the work of a genius.2

The housing bubble and the financial crisis that followed are considered a classic case of a lack of sufficient regulation, which in turn permitted unmitigated greed and irrational behavior to cause a massive amount of manic speculation.

The idea that banking and finance are unregulated is just plain laughable. There are various regulatory agencies at the state, federal, and international level. Thomas Woods reports that there are over 12,000 bureaucrats devoted to financial regulation in Washington DC alone and that inflation-adjusted spending on it has tripled since “deregulation” began in 1980. There are at least 115 agencies that regulate the financial industry at the state and federal levels alone.3

Three regulatory factors that contributed importantly to the crisis and its magnitude were as follows:

2. The regulations and requirements imposed on banks forced them to make bad loans under the Community Reinvestment Act.

The housing bubble is a classic case of how regulation cannot prevent such problems, but can only help increase their magnitude. The biggest regulator of money, banking, and housing is the Federal Reserve. It is the dominant umbrella regulator, and it caused the housing bubble with its long policy of easy credit from 2001 to 2006. Chairman Alan Greenspan denied a bubble could exist and about the same time, his Vice Chairman Ben Bernanke even provided words of encouragement for an audience of independent community bankers:

Our examiners tell us that lending standards are generally sound and are not comparable to the standards that contributed to broad problems in the banking industry two decades ago. In particular, real estate appraisal practices have improved.4

Other officials at the Federal Reserve would continue to laud Federal Reserve policies and the financial innovations such as mortgage back securities and credit default swaps well into 2007. They were the cheerleaders for the housing bubble, providing confidence for both leaders and speculators.

Another example: the BP Gulf oil spill was certainly a tragedy, especially for the company. Being so far off shore and drilling for oil in such deep waters made it seem that there was absolutely no government regulation. The government had no assets to stop the oil spill or to prevent it from spreading. We all had to just sit, watch, and wait for the company itself to fix the problem.

The irony is that the reason that BP was drilling in such an inhospitable environment was precisely because of government intervention. The Federal government prohibits drilling in the relatively safe and shallow eastern Gulf of Mexico and permits it in the deeper; more storm prone western Gulf of Mexico. Federal regulators also administer a tax and fee structure that encourages oil companies to drill primarily in the deepest, riskiest regions of the Gulf.

Federal regulation of oil drilling rigs is conducted by the Mineral Management Service (MMS). They are supposed to conduct monthly inspections of these massive rigs, publish reports and issue safety citations when necessary, and put rigs on a regulatory “watch list” for any rig with repeated safety violations.

Well that simply did not happen. The inspections were not held on a monthly basis. Inspectors spent little time on the rigs during inspections; they often relied on the company itself for safety information, and issued very few safety citations. Sadly, regulators actually designated the Deepwater Horizon rig's safety record as exemplary and based on that track record the agency named the rig a model for industry safety in the year prior to the disaster.5

In fact, the MMS never required compliance with regulations related to inspecting the blowout preventer device, which ultimately caused the spill to spiral out of control.6 The reason MMS was lax in its duties and even allowed company officials to write up its reports7 is probably because MMS employees were accepting all sorts of kickbacks, bribes, and other benefits.8 Officials in charge have expressed regret, and promised it won’t happen again: at least for the next couple of years, for sure.

As these examples illustrate, when examining this type of scandal, you do not find unregulated firms fleecing their customers. What you do find are highly regulated firms that are being pushed and pulled by regulations into unstable and unethical activities. Enron is another good example. It was probably regulated by more agencies than any company in existence and yet it created a gigantic mess that was never noticed by regulators, but had to be uncovered by a single independent financial analyst.9

The regulator is portrayed as a public-spirited specialist. They know the public good. They know the results that are expected. They know how to bring about those results. It is as simple for them to regulate their corner of the economy as it is for Emeril Lagasse to make crab cakes or for Martha Stewart to make a simple doily.

The public is told that regulators do not cause problems; they prevent them. They police the economy. They are the watchmen that have been endowed with the wisdom, ability, and selfless devotion to the public good.

There are indeed many people who work as government regulators that are very smart and well-trained that have public spirit and the public good in their hearts. There are also plenty of cads and knuckleheads that work as regulators.

The problem with government regulation is that you cannot fine-tune the regulations: nor can you perfect the regulatory work force in such a way to make regulation work in anything but a superficial way. The truth is that regulation instills confidence in the public so that they let down their guard and makes them less cautious while at the same time distorting the competitive nature of firms in the marketplace.

After every economic crisis there are calls for new regulations, more funding, and more controls. Economic wisdom dictates that we be ready to contest those calls when the next crisis of the interventionist state occurs.10