GET NEWS AND ARTICLES IN YOUR INBOXPrint
A
A
Home | Mises Library | Saved by a Trillion-Dollar Coin?

Saved by a Trillion-Dollar Coin? 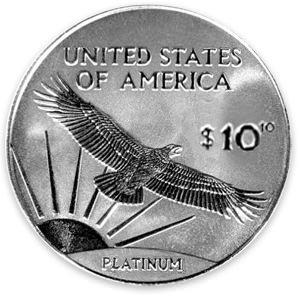 08/04/2011Robert P. Murphy
Now that the "crisis" over the federal debt ceiling has been averted, we can leisurely explore two of the wackier proposals that emerged during the state of panic. Not surprisingly, the schemes involved the Federal Reserve and its ability to circumvent, not just standard accounting, but also the traditional divisions of political power. It's worth studying the episode carefully because we will probably see one or more of these "solutions" promoted as the only answer to another crisis in the not-too-distant future.

Late last week, when more and more analysts contemplated the horror of a US government default and partial shutdown, Jack Balkin — a professor of constitutional law at Yale — outlined strategies that the White House could use to evade the pesky borrowing ceiling imposed by a fickle Congress:

Are there other ways for the president to raise money besides borrowing?

Sovereign governments such as the United States can print new money. However, there's a statutory limit to the amount of paper currency that can be in circulation at any one time.

Ironically, there's no similar limit on the amount of coinage. A little-known statute gives the secretary of the Treasury the authority to issue platinum coins in any denomination. So some commentators have suggested that the Treasury create two $1 trillion coins, deposit them in its account in the Federal Reserve and write checks on the proceeds.

The government can also raise money through sales: For example, it could sell the Federal Reserve an option to purchase government property for $2 trillion. The Fed would then credit the proceeds to the government's checking account. Once Congress lifts the debt ceiling, the president could buy back the option for a dollar, or the option could simply expire in 90 days. And there are probably other ways that the Fed could achieve a similar result, by analogy to its actions during the 2008 financial crisis, when it made huge loans and purchases to bail out the financial sector.

The "jumbo coin" and "exploding option" strategies work because modern central banks don't have to print bills or float debt to create new money; they just add money to their customers' checking accounts.

These suggestions should horrify anyone who understands the importance of sound money. Not only are the proposals themselves preposterous, but the mere fact that they are being discussed is a symptom of the cultural decadence wrought by the government and the Fed's responses to the 2008 financial crisis.

When critics of the Fed assert that Bernanke creates money "out of thin air," they mean the following: The Federal Reserve has the power to buy whatever assets it wants at whatever price it wants. In principle, Treasury Secretary Geithner could sell a paperclip to the Fed for $2 trillion. The Fed would simply write a check made out to the Treasury, drawn on the Fed itself.

When the Treasury deposited this check with its own bank — which just so happens to be the Fed — then its own "checking account" balance would go up by $2 trillion. This money wouldn't come from anywhere in the sense that some other account would need to be debited $2 trillion. On the contrary, the system's total reserves (and what is called the "monetary base") would have swelled by $2 trillion. The Treasury would be free to start paying bills by writing checks on the $2 trillion in its account.

The only kink in the plan would be the state of the Fed's balance sheet. Initially it could value the paperclip at $2 trillion — what the Fed paid for it — and list the paperclip among its other assets such as Treasury bonds and mortgage-backed securities.

Of course, people in the financial markets would cry foul. They would know that if the Fed's books were "marked to market," the paperclip would be worthless and the Fed would suddenly be insolvent according to regular accounting rules. (Its liabilities, in part consisting of bank reserves — which are dollar-denominated claims on the Fed — would have risen by $2 trillion, while its assets didn't budge.) But this would merely be an embarrassment rather than a legal obstacle because the Fed has put into place Orwellian rule changes that allow it to shield its shareholder equity from capital losses.

The difference between my absurd paperclip scheme and the two proposals discussed by Balkin is one of degree and not of kind. As of this writing, platinum is trading for a little less than $1,800 per ounce. Thus, $2 trillion in platinum would weigh about 35,000 tons, almost one-sixth the weight of the Sears Tower. (Those would be two of the heaviest coins Bernanke would likely encounter in his life.) Clearly, the platinum coins stamped "$1 trillion" would not actually be worth that in terms of the metal content.

Things are just as bad with the option scheme in which the Fed would quite deliberately pay $2 trillion for an asset that it intended to hold until it expired as worthless. At least my hypothetical paperclip would still be useful after 90 days.

Debasing the Money, As Well as the Public's Ideology

Conventional "open-market" operations are a convoluted form of legalized counterfeiting, as I've explained before. The virtue of Balkin's discussion is that the sleight-of-hand is minimized and most readers will be able to see the naked redistribution in all its glory (or lack thereof). We are moving ever closer to the point at which the government runs the printing press to directly pay its bills, just as surely as the monarchs of old who added base metals to the coinage of the realm.

The danger of these proposals doesn't consist solely in the price inflation and transfer of purchasing power that they would entail if implemented. No, simply the discussion of them by allegedly sophisticated scholars further degrades the public's understanding of money. More and more Americans are "learning" that saving and frugal living is a sucker's game, because the Treasury and Fed will simply create money to bail out their rich buddies.

Flawed as it is, the US Constitution vested fiscal authority with the Congress — rather than with the Executive Branch — for an important reason. The president has several advantages, not least of which is his (or her) ability to wage war. Therefore the Constitution seeks to limit that power by keeping the purse strings in the hands of elected representatives.

If the Treasury ever falls back on a scheme such as the ones Balkin discusses, the United States will be one step closer to an outright dictatorship. The American president now claims the authority to execute US citizens without any judicial oversight at all. This is not a person to whom we should grant a printing press.