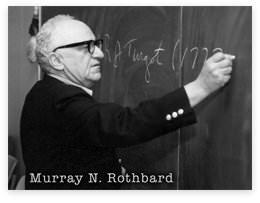 Tags BiographiesEntrepreneurshipHistory of the Austrian School of EconomicsPhilosophy and Methodology

The first night of class, this little man with thick glasses perched on a Durantesque nose, sporting a bow tie and a pocketful of pens, shuffled into the room. He began talking the moment he stepped through the door, poking fun at the silly politicians who were deriding the "evil" oil companies for supposedly using the Gulf War to gouge consumers.

It was a typical Rothbard tale, illuminating how the free-market price system efficiently distributes goods, while government intervention mucks things up. He then launched into his History of Economic Thought story, which during the fall 1990 semester had a monetary theme. There was no time to take roll or go over a syllabus; we had centuries to cover.

Most libertarians discovered Murray Rothbard by reading The Ethics of Liberty, For a New Liberty, or one of his many other books or articles. My discovery started with the following entry in the University of Nevada Las Vegas 1990 fall course catalog: "History of Economic Thought, instructor — Rothbard."

When I asked another graduate student about the History of Thought class, the student advised me not to take Murray, describing him as a "kook." Luckily, I didn't take this incredibly poor advice.

Murray's classes had no sterile graphs or labyrinthine equations. Rather, it was like listening to your favorite uncle tell stories about the good old days, peppered with countless reading suggestions. Murray was a walking bibliography, reciting not only the title but the author, the date published, and, in some cases, the publisher of the books he recommended. He was an awesome weapon to have on your side when researching and writing a thesis.

Two evenings a week I listened as Murray told of good guys and bad guys, the theories they espoused, their influences, and why these theories were put into practice. The villains of these economic dramas were always evil government bureaucrats and politicians, who lurked ominously in the shadows either silently stealing through inflation or openly robbing with taxation.

A Rothbard lecture was like being a passenger in a high-speed car chase. With facts and ideas streaming at us, Murray would suddenly change direction, heading down a path that seemingly took us away from our destination, but never did. He knew exactly where he was going. I hung on with the rest of the class, furiously trying to take down every word.

Because Murray's lectures were so good (and different from semester to semester), many of his students would audit his History of Economic Thought and US Economic History classes over and over. In one of his last History of Thought classes, only 20% of the students were taking the class for credit.

Murray's office-hour time was always in great demand. I spent many hours outside his office door waiting in line to talk to him. My waits were always rewarded. Murray did not talk down to me or any of his other students. In fact, he often asked as many questions as he answered, and was genuinely interested in what I thought. And we always had plenty of laughs. It was worth driving across town just to hear Murray's spin on current events, punctuated with his unmistakable cackle.

But Murray was anything but revered by most of the economics faculty at UNLV. The rest of the department resented the "east end of the hall," where Murray, Hans-Hermann Hoppe, and a couple of free-market sympathizers had their offices on Beam Hall's fifth floor. Although most of the economics department's publishing came from the "east end," the department chairman and graduate coordinator continually made snide remarks to students and colleagues about the Austrians, and did all they could to discourage students from studying under Rothbard and Hoppe.

The initial draft of Murray's performance evaluation for 1991 illustrates the appalling treatment he received from the department's then-chairman (whose claim to fame was that he had coauthored a journal article concerning the various strengths of sunscreen).

"Student evaluations indicate that Professor Rothbard's performance is significantly above the department average," wrote the chairman — yet he rated Murray's classroom performance as only "satisfactory."

More unbelievable was the chairman's claim that Murray's professional growth was "disappointing." That year, Murray had published two books in France, two smaller books in the United States, and two scholarly articles, and had consulted on the publishing of a colleague's book. He was the editor of two scholarly journals and delivered papers at a number of conferences. All of this while teaching his classes, directing three graduate students' professional papers, and chairing one student's masters essay and oral examination.

The chairman even had the nerve to write that he expected Murray "to teach more students," despite the fact that he had been instrumental in abolishing the masters program in theory and policy that most of Murray's students, including this writer, elected to pursue. As Murray wrote in his protest, the chairman's "actions belied his words."

Murray Rothbard was a treasure that the UNLV economics department attempted to keep hidden from students. Thus, there were very few of us fortunate enough to have studied under him. I think about Murray every day, and how lucky I am to be one of those few.

The last time I saw Murray was in mid-December of 1994, prior to final exams. As usual, we talked and laughed about many subjects, including my trip to Liberty's Tacoma conference. We were going to have great fun listening to R.W. Bradford's "Why Libertarians Love to Hate" tape from that conference when Murray returned for the spring semester.

At Murray's memorial, his UNLV colleague Clarence Ray related that Murray Rothbard was, first and foremost, a nice man. There were many at UNLV who disagreed with Murray's ideology, but no one disliked him.