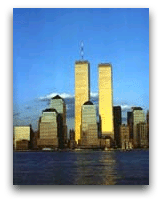 Plenty of reasonable people can disagree about foreign policy. What's really strange is when one reasonable position is completely and forcibly excluded from the public debate.

Such was the case after 9-11. Every close observer of the events of those days knows full well that these crimes were acts of revenge for US policy in the Muslim world. The CIA and the 911 Commission said as much, the terrorists themselves proclaimed it, and Osama underscored the point by naming three issues in particular: US troops in Saudi Arabia, US sanctions against Iraq, and US funding of Israeli expansionism.

So far as I know, Ron Paul is the only prominent public figure in the six years since who has given an honest telling of this truth. The explosive exchange occurred during the Republican Presidential debate in South Carolina.

Ron was asked if he really wants the troops to come home, and whether that is really a Republican position.

"Well," he said, "I think the party has lost its way, because the conservative wing of the Republican Party always advocated a noninterventionist foreign policy. Senator Robert Taft didn't even want to be in NATO. George Bush won the election in the year 2000 campaigning on a humble foreign policy –no nation-building, no policing of the world. Republicans were elected to end the Korean War. The Republicans were elected to end the Vietnam War. There's a strong tradition of being anti-war in the Republican party. It is the constitutional position. It is the advice of the Founders to follow a non-interventionist foreign policy, stay out of entangling alliances, be friends with countries, negotiate and talk with them and trade with them."

He was then asked if 9-11 changed anything. He responded that US foreign policy was a "major contributing factor. Have you ever read the reasons they attacked us? They attacked us because we've been over there; we've been bombing Iraq for 10 years. We've been in the Middle East –I think Reagan was right. We don't understand the irrationality of Middle Eastern politics. So right now we're building an embassy in Iraq that's bigger than the Vatican. We're building 14 permanent bases. What would we say here if China was doing this in our country or in the Gulf of Mexico? We would be objecting. We need to look at what we do from the perspective of what would happen if somebody else did it to us. "

And then out of the blue, he was asked whether we invited the attacks.

"I'm suggesting that we listen to the people who attacked us and the reason they did it, and they are delighted that we're over there because Osama bin Laden has said, 'I am glad you're over on our sand because we can target you so much easier.' They have already now since that time –have killed 3,400 of our men, and I don't think it was necessary."

Then the very archetype of the State Enforcer popped up to shout him down.

Now, this is interesting because it is obvious that Ron never said that we invited the attacks. This was a lie. He said the US foreign policy was a "contributing factor" in why they attacked us, a fact which only a fool or a liar could deny. Guiliani then went on to say that he has never "heard that before" –a statement that testifies to the extent of the blackout on this question.

Ron Paul was invited to respond, and concluded as follows:

"I believe very sincerely that the CIA is correct when they teach and talk about blowback. When we went into Iran in 1953 and installed the shah, yes, there was blowback. A reaction to that was the taking of our hostages and that persists. And if we ignore that, we ignore that at our own risk. If we think that we can do what we want around the world and not incite hatred, then we have a problem. They don't come here to attack us because we're rich and we're free. They come and they attack us because we're over there. I mean, what would we think if we were –if other foreign countries were doing that to us?"

Wow, he broke the great taboo in American political life! Why this should be a taboo at all is unclear, but there it is. But now that it is finally out in the open, this shocking theory that the terrorists were not merely freedom-hating madmen but perhaps had some actual motive for their crime, let's think a bit more about it.

It is a normal part of human experience that if you occupy, meddle, bully, and coerce, people who are affected by it all are going to get angry. You don't have to be Muslim to get the point. The problem is that most of the American people simply have no idea what has been happening in the last ten years. Most Americans think that America the country is much like their own neighborhood: peaceful, happy, hard working, law abiding. So when you tell people that the US is actually something completely different, they are shocked.

Why would anyone hate us? The problem is that the military wing of the US government is very different from your neighborhood. After the Soviet Union crashed, US elites declared themselves masters of the universe, the only "indispensable nation" and the like. All countries must ask the US for permission to have a nuclear program. If we don't like your government, we can overthrow it. Meanwhile, we sought a global empire unlike any in history: not just a sphere of interest but the entire world. Laurence Vance has the details but here is the bottom line: one-third of a million deployed troops in 134 countries in 1000 locations in foreign countries.

All during the 1990s, the US attempted to starve the population of Iraq, with the result of hundreds of thousands of deaths. Madelyn Albright said on national television that the deaths of 500,000 children (the UN's number) was "worth it" in order to achieve our aims, which were ostensibly the elimination of non-existent, non-US built weapons of mass destruction. Yes, that annoyed a few people. There were constant bombings in Iraq all these years. And let us not forget how all this nonsense began: the first war in 1991 was waged in retaliation for a US-approved Iraqi invasion of its former province, Kuwait. Saddam had good reason to think that the US ambassador was telling the truth about non-interference with Kuwait relations: Saddam was our ally all through the Iran-Iraq war and before.

Ron spoke about complications of the Middle East. One of them is that the enemy we are now fighting, the Islamic extremists, are the very group that we supported and subsidized all through the 1980s in the name of fighting Communism. That's the reason the US knows so much about their bunkers and hiding spots in Afghanistan: US taxdollars created them.

Now, I know this is a lot for the tender ears of Americans to take, who like to think that their government reflects their own values of faith, freedom, and friendliness. But here is the point that libertarians have been trying to hammer home for many years: the US government is the enemy of the American people and their values. It is not peaceful, it is not friendly, it is not motivated by the Christian faith but rather power and imperial lust.

Ron is such a wonderful person that I'm sorry that he had to be the one to tell the truth. One could sense in the debate that he was making an enormous sacrifice here. After Guiliani spoke, the red-state fascists in the audience all started whooping up the bloodlust that the politicians have been encouraging for the last six years –a mindless display of Nazi-like nationalism that would cause the founding fathers to shudder with fear of what we've become. These people are frantic about terrorism and extremism abroad, but they need to take a good hard look in the mirror.

Thank you, Ron, for doing this. We are all in your debt.
Author: