Robert Taft and His Forgotten “Isolationism” 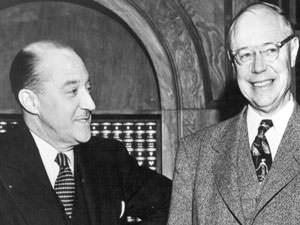 Taft is now a forgotten Republican, but in the 1940s and 1950s he was known as “Mr. Republican.” Taft has few scions in the modern GOP.

Still, echoes of Taft recently re-surfaced, even though many of the people subscribing to these ideas had never heard of Taft. Millions of Americans inadvertently became “isolationists” for a short period. After President Obama suggested that the United States should start bombing Syria, they flooded Washington with communications, insisting that we stay out. Taft likely would have been delighted. He believed that when foreign policy issues were extensively debated by the public the potential for war declined.

However, “most Republicans,” Wall Street Journal columnist Bret Stephens recently wrote during the Syrian debate, “don’t want to become again the party of isolationists.” Nevertheless, Taft has been acclaimed as one of the great leaders of the modern Republican Party by numerous historians. He represented a GOP wing that embraced a peaceful way of engaging the world. This was a philosophy that once was very popular with most Americans. Still, the John McCain/Mitch McConnell rationale for still another American military intervention was that “the prestige of the presidency” would be hurt if President Obama backed down.

Taft viewed the prestige of the presidency and the world in a different way. He was not only a critic of big federal budgets, he frequently complained about defense spending after WWII. Taft consistently warned of the tragic nature of war, saying “[w]e should never forget what an awful catastrophe war is.”

Taft also warned of the long term domestic effects of following an imperial foreign policy. “Just as our nation can be destroyed by war it can also be destroyed by a political or economic policy at home which destroys liberty or breaks down the fiscal and economic structure of the United States,” Taft wrote in his only published book, A Foreign Policy for Americans. Taft continued: “We cannot adopt a foreign policy which gives away all of our people’s earnings or imposes such a tremendous burden on the individual American as, in effect, to destroy his incentive and his ability to increase production and productivity and his standard of living.”

Once committed to an interventionist foreign policy. Taft believed defense spending would stay at permanently high levels if the United States entered into military alliances. The use of U.S military power, he said, should be very limited.

“I do not believe any policy which has behind it the threat of military force is justified as part of the basic foreign policy of the United States except to defend the liberty of our people,” Taft wrote. It is that comment, along with his 1949 vote against joining NATO, which explains why Taft is usually cited by Republicans today as an example of the so-called bad old days. Taft also didn’t want the United States to have a peacetime draft. The domestic consequences of an aggressive foreign policy, he warned, would lead to the curtailment of civil liberties.

Taft scholar Professor John Moser of Ashland University writes that Taft believed that war tended to concentrate power in the hands of the central state. It threatened, Taft believed, “the cherished American ideals of limited government and separation of powers.” It reduced the powers of state and local governments, Taft said. Decentralized government, Taft held, was one of the guarantees of liberty. Moser also wrote that Taft had an “innate anti-militarism.”

Centralization would be furthered by the American state entering into military alliances, Taft said. By turning its back on its non-interventionist history, the nation would be bogged down in needless wars.

Taft also had an innate decency. He opposed war-crime trials and criticized the War Department’s jailing of Japanese-Americans during WWII. Taft called the treatment of Japanese Americans the product of “the sloppiest criminal law I have read or seen anywhere,” according to Secretary Stimson by Richard N. Current.

Who was Robert Taft? The son of a president and U.S. Supreme Court justice, Taft was elected in 1938 to the Senate from Ohio. Beginning his congressional career as a critic of FDR’s New Deal, he would warn of the dangers of an aggressive foreign policy. Taft opposed FDR’s backdoor foreign policy just before WWII.

This was a policy in which FDR proclaimed America’s intent to stay out of European wars—clearly a policy favored by most Americans in the late 1930s and early 1940s as shown in public opinion polls—while he privately supported the British. He also often ignored Congress while his policy became deliberately provocative.

After World War II, Taft ended his career by questioning the Truman Doctrine—which committed the United States to opposing communism in Greece and Turkey as well as almost anywhere else—and later urged president Dwight Eisenhower not to send troops to Indochina to save the French. Their Asian empire was collapsing in the early 1950s. Although initially supportive of President Truman in the Korean War, Taft later complained that the president had never asked for Congressional authorization in sending troops into war. Taft also questioned the legitimacy of the UN resolution calling for American intervention.

Taft hated the term “isolationist,” but said he accepted it if it meant “isolating the United States from the wars of Europe.” Still, isolationism was a sentiment that was in the political mainstream through a large part of the 20th century. Taft was three times a failed aspirant for his party’s presidential nomination. His last try was in 1952. The GOP’s internationalist wing triumphed, giving the nomination to Eisenhower. Here was a turning point in American history. “Taft,” wrote Michael Burleigh in Small Wars, Faraway Places, was a “serious anti-interventionist presidential candidate.”

Taft also criticized bipartisan support for aggressive American foreign policy. Taft, in a debate that would recur prior to numerous wars, argued that a president’s foreign policy should face the same political constraints as his domestic policy. “There are some who say politics should stop at the water’s edge, and that nation must present a united front. I do not agree,” Taft said in a radio address in September 1939.

Taft also warned that the United States, supposedly trying to help struggling democracies and fight totalitarian regimes after WWII, could easily slip into the 19th-century role of the British Empire. The United States, Taft said, could become the self-appointed world policeman, a new John Bull (Novelist Washington Irving had written in his sketch John Bull, “He [John Bull] is continually volunteering his services to settle his neighbors’ affairs and take it in great dudgeon if they engage in any matter of consequence without asking his advice.”)

Many years later, amongst the angst caused by the Vietnam War, a few Americans did start to reconsider Taft. It was Washington Post columnist Nicholas von Hoffman who aptly described Taft’s so-called isolationism after it was repeatedly dismissed.

“It is a full generation later,” von Hoffman wrote, “and it turns out that Taft was right on every question all the way from inflation to the terrible demoralization of the troops.” He noted that Dean Acheson in the 1970s, still condemned isolationism and President Nixon disparaged Taft’s foreign policy. Von Hoffman concluded both were wrong.

Taft’s foreign policy, the columnist said, “was a way to defend the country without destroying it, a way to be part of the world without running it.” It’s time for a reconsideration of this forgotten Republican.