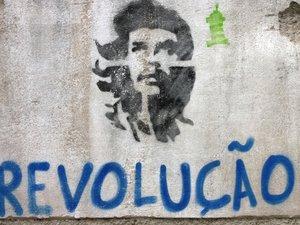 Left-wing revolution is one of history's biggest bait-and-switches. Both for the intellectuals who hanker for the grapeshot, and for the marginalized peoples who get concentration camps instead of the anti-capitalist utopia they were promised.

The left-wing revolutions of the twentieth century have all followed this pattern: midwifed by utopian intellectuals, power is quickly seized by political entrepreneurs who play to the basest instincts of the common people. Even in the most “civilized” places, such as “anything goes” Weimar Germany or 1950s “playground of the stars” Cuba, these newly enthroned are happy to see those eggheads and their “perverted” friends interred, tortured, hung from the nearest lamp post.

The litany is depressing. Especially for any tenured radical drawing taxpayer money to cheer on the violence. Mao famously boasted of “burying 46,000 scholars alive” meaning he shipped them wholesale to concentration camps so they would shut up and die. Pol Pot’s radical communist movement famously executed intellectuals in the thousands, extending to anybody who wore glasses. Even the supposedly “cool” regimes like Fidel Castro set up concentration camps for homosexuals, while the Soviet Union illegalized homosexuality for over fifty years, outdoing by a mile that light-weight hater Putin.

Most ironically, given his campus stardom, radical hero Che Guevara gleefully and personally executed homosexuals, whom he detested, while helping set up Fidel's network of camps across the county to torture gays and effeminate men into renouncing their allegedly wicked perversions that were supposedly the product of morally corrosive capitalism.

Why do reformist revolutions enjoy executing both left-wing intellectuals and the very “vulnerable groups” so near to the leftist heart? Because power has its own logic. Because any government based on violence has to constantly watch its back. And that means it has to appeal to the basest instincts of the masses. If the masses hate gays, or Jews, or the eggheads, then the government will do what it's told, stuffing the Gulags with gays, Jews, and eggheads. What the basest people hate, omnipotent government hates.

Why are intellectuals so blind to this horrible pattern? Presumably, they hope this time is different and that the campus radicals and their pet politicians will hold on this time. If history is a guide, they will not. Instead, their revolution will get snatched from them by political entrepreneurs and turned into their worst nightmare: a revolution that is anti-intellectual, anti-gay, racist, and anti-Semitic. No matter how pure the birth of the revolution, history suggests this is what it will come to.

This gives no pleasure to point out. None of us want radical leftists hanging from lampposts, or executed in Che's office for his entertainment. What we do wish is that violence-promoting reformers would have a bit more respect for the fire they play with. For them to study a bit more history. To understand why it is, always and everywhere, so dangerous to ride the tiger of unlimited government.

The left thinks it can control the tiger of the masses unleashed. It cannot, and indeed it will be the first to hang. And that would be very sad for us all, left and right.