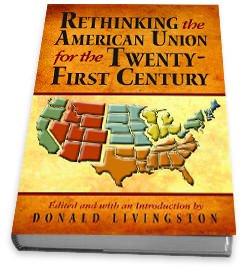 The contributors to Donald Livingston's valuable collection of essays defend two main contentions. Each of these contentions may be held independently of the other, but the first one provides a reason to welcome the truth of the second.

Livingston, with characteristic care, states the first of these contentions in this way:

As Aristotle taught, everything in nature has a proper size, beyond or below which it becomes dysfunctional.… The same holds for the functioning of other social entities [than a jury] such as committees, lawmaking assemblies, and bureaucracies and the ratio of population to representative (e.g., one representative for every million persons is not representation at all). None of these can function well if they are too large or out of scale. (pp. 16–17)

Livingston concludes that a republic must be of limited size. His argument, if I have grasped it, is this: A republic must have a representative legislative assembly. In order to count properly as representative, the number of persons that each member of the assembly represents must not be too large. But it is also the case that the number of people in the assembly itself cannot be overly large, for the reason stated in the preceding paragraph. In a large republic, these requirements cannot at the same time be met. Thus, the proper size of a republic is necessarily limited.

Livingston adds to this argument an appeal to tradition:

Any thinking about the proper size and scale of republican order must take its bearings from the republican tradition that stretches back to the ancient Greeks. When we do so, we must be astonished to find that for over two thousand years, republics seldom went beyond a population of 200,000 people, and most were considerably smaller. (p. 126)

What is more, "the republican tradition also taught that the government of a large territory would necessarily end in a centralized monarchy" (p. 25).

Kirkpatrick Sale likewise appeals to Aristotle, who "thought mostly in terms of cities, not knowing nations, but even if we may extend these units with the experience of 2,000 more years to larger units such as nations, they have to be limited: limited by human nature and human experience" (p. 168).

We have abundant evidence that a state as large as 305 million people is ungovernable. Did not Katrina and the BP oil disaster prove that, or runaway health care costs and broken borders, or the failure of education…? (p. 168)

Before we ask whether the argument about the size of a republic is right, another issue requires attention. Even if the argument of Livingston and Sale is correct on its own terms, have they wrongly presupposed a premise that should be challenged, if not rejected altogether? They ask, what are the conditions under which a republic can flourish; but what if one denies the need for a state at all, even though it be a properly functioning republic?

Though the case against the state seems to me entirely persuasive, anarchists should not dismiss the question of size that Livingston and his colleagues raise. If ideally we ought to do away with the state altogether, nevertheless we need also to ask, given the existing world of nation states, how may the power of the state to do damage be limited to the greatest extent that is in practice possible?

Further, anarchists need to consider an analogous issue to the one raised in this book. What is the proper size of an anarchist protection agency? Do too many clients for a single agency pose problems similar to the ones created by too many constituents for a member of a legislature?

Granted that the question of the proper size of a republic is legitimate, even for anarchists, do the authors of this book respond to it correctly? Their case for small size strikes me as largely persuasive: tyrannical power has indeed often been conjoined with great size. But not always: Cambodia comes to mind as the most striking exception — a very small state whose Communist rulers were guilty of monstrous evil.

Further, an objector might say, perhaps the authors have focused on the wrong issue. Is not the scope of the government more important than its size? Would not a government strictly limited in scope that controlled a large territory be better than an intrusive and meddling state of small size? But the authors might with justice reply that limiting the size of a nation is often an indispensable means to ensuring that the scope of its government is small.

Before turning from this topic, I should like to raise one more point. Suppose the authors are correct: the proper size of a republic is small, and too large a state requires the abandonment of republican government and risks the onset of tyranny. Does it follow from these facts that for any state larger than the proper size, a reduction in size that falls short of the ideal always constitutes an improvement? I cannot see that it does, although it may well in practice be true that such reductions are almost always desirable.

If the authors' case has merit, does not a practical difficulty render what they have defended with such care inoperable in our own world? In a world of colossal states, how can a small republic hope to survive? Livingston ably faces the problem, noting in the first place that small states do not always lose conflicts with larger ones, and in any case pointing to federation as one possible solution. Here he appeals to David Hume, who "agrees with the republican tradition that 'a small commonwealth is the happiest government in the world within itself' but 'it may be subdued by great force from without'" (p. 143).1

Hume proposed a large republic composed of 100 small republics. Laws passed by the national senate required ratification by a majority of the constituent republics. In essence, Hume thought, the advantages of small size could in this way be joined to the greater fighting power of a large state.

Hume's ideas, along with similar views by other writers, influenced the founders of the American republic; and here we arrive at the second of the two major contentions of this book. It is that America was founded not as a centralized Leviathan but as a federation of republics, each of which retains intact its sovereign power, except on matters delegated to the national government. Each state, on this view, retains the right to leave the federation, should it deem that the national government (or the other states) has sufficiently violated its rights. The 11 Southern states that seceded in 1861 thus acted legally, whether or not they were wise to do so.

Kent Masterton Brown, in his long and learned contribution to the book, very forcefully defends this position. As he points out,

The Constitution is an agreement "between the States so ratifying the same" [quoting the Constitution]. It has parties — the States. Each of the parties agreed to surrender some powers in exchange for receiving a "common defense" and some regulation of commerce between the States when it was necessary.… Each party retains the right to rescind its ratification of the Constitution if there is a material breach by other States or by the federal government created by the Constitution.… The framers and ratifiers of the Constitution unquestionably understood it to be a "compact." Not only did the document, in form, contain all the elements of a contract, but the prevailing political thought of revolutionary America underscored the fact that written constitutions were "compacts." (pp. 42–43)

Though Brown's argument is strong, I should like to have seen a response to an objection. If states could withdraw at will from the union, why did the anti-Federalists so much stress in the ratification debates the dangers of centralization? If a ready remedy existed for federal usurpation of power, why was such usurpation so perilous a prospect? Perhaps, though, they did not doubt the legal possibility of secession but rather feared that in practice it would prove difficult to carry out with success — as indeed proved to be the case in 1861.

If the Constitution established the United States as a decentralized federation, unfortunately federal aggrandizement of power in the long run prevailed. In an incisive essay, Thomas DiLorenzo explores the steps by which the old order was upset. As he makes clear, from the beginning of our national history, Alexander Hamilton, whom Cecelia Kenyon aptly termed the "Rousseau of the Right" (p. 72), and his followers, dissatisfied with the decentralized government of the Constitution, endeavored to substitute for it a regime of centralized power. In this endeavor, Hamilton had the very considerable help of Chief Justice John Marshall, whose nationalist opinions often echoed Hamilton's words.

Marshall also repeated Hamilton's bogus theory of the American founding, claiming that the "nation" somehow created the states. He amazingly argued that the federal government was somehow created by "the whole people."… In the name of "the people," Marshall said, the federal government claimed the right to "legitimately control all individuals or governments within the American territory." (p. 70)

Readers of DiLorenzo's outstanding books on Lincoln will not be surprised to learn that he assigns Lincoln a large measure of responsibility in the drive toward national consolidation.2 Marshall DeRosa is entirely in accord:

Lincoln rhetorically explained [at Gettysburg] that he launched the U.S. into a war of aggression against the C.S.A. in order to re-found America without the Southern defilement; this is what he meant by a "new birth of freedom." The physical evidence lay all around him in Gettysburg that Southerners were not to have a government of, by, and for the Southern people but a coercive government based in Washington, D.C. (p. 94)

For the contributors to this book, secession is not an issue confined to the past. They regard it as an essential remedy for the ills of today's overly large America. In this connection it is interesting to note that secession had the backing of the renowned American diplomat and historian George Kennan, who, in a manner that would have delighted Thomas Jefferson, called for America to be broken up into a number of regional commonwealths. "To begin the debate, and without being dogmatic, Kennan suggests that the Union could be divided into 'a dozen constituent republics'" (pp. 21–22).

Rethinking the American Union for the Twenty-First Century repays careful study by anyone interested in political philosophy or in American history. In their bold defiance of contemporary orthodoxy, the contributors deserve great praise.