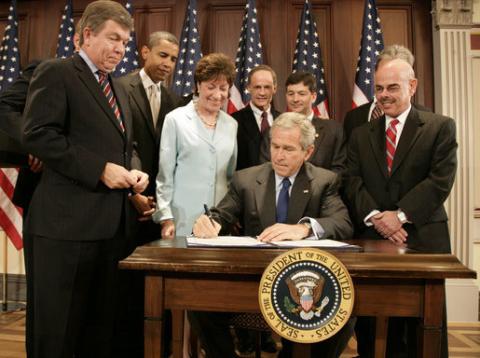 Politicians intent on re-election have stirred up a media frenzy over "corporate governance," exploiting the bankruptcies of a handful of companies like Enron and Worldcom. New accounting industry and corporate financial reporting rules are being imposed with reckless abandon in Washington, D.C.

Yet the political class that seeks to grant itself sweeping new power over the private sector lacks even a basic understanding of business.

It is particularly frightening that a group of people skilled mainly at feeble speechifying and crass fund-raising would consider itself qualified to stand in judgment of corporate accounting scandals. All members of Congress are direct participants in the biggest accounting fraud going--the federal government--and have never lifted a finger to bring it under control.

Whether it is placing massive Social Security liabilities "off budget," losing billions of dollars in aid to Russia and other foreign governments, or mismanaging trust fund accounts for Native Americans, the feds seem to have a congenital inability to be honest about public financial matters.

The government itself is guilty of massive financial malfeasance and corruption, but it is never punished.  Even the corporate welfare agencies most responsible for propping up Enron--the Ex-Im Bank and the Overseas Private Investment Corp--seem forgotten in the ongoing witch-hunt associated with corporate responsibility. The Securities and Exchange Commission (SEC), we are told, needs to be rewarded with more money, staff, and power to stop from bungling its job yet again.

The same crew in the nation’s capital that could not bring itself to discipline the ethical misbehavior of Bill Clinton or Gary Condit now deigns to restructure the way all businesses prepare their financial statements. Yet, during congressional hearings over Worldcom, it became apparent that few politicians know much at all about business.

One ignorant lawmaker, during his pontification disguised as a question, was stumped to think up the name of any high profile bankruptcy besides Enron (he said the word "and" about 10 times before giving up). Another seemed to be under the impression that Worldcom had lost $3.8 billion, rather than miscategorized $3.8 billion of operating expenses as capital expenses. "Do you know now where that money went?" the congressman asked repeatedly, as the witnesses stared at him in amazement.

The entire House committee mistakenly believed that Salomon Smith Barney telecom analyst Jack Grubman helped Worldcom perpetrate fraudulent bookkeeping, calling him as a witness and grilling him along with company officials. Wall Street analysts play no role in preparing financial statements for companies. One lawmaker asked Grubman if he had ever advised an investor to sell Worldcom stock, not understanding that research analysts do not advise individual investors.

Moreover, the pols seemed confused to learn that the primary purpose of investment banks is to raise money for corporations, thus they generally tell investors what to buy, not what to sell. When Grubman tried to explain his job to the committee, the confused congressmen lashed out and accused him of evading their questions. Tongue-tied Congresswoman Maxine Waters (D-Calif.) mistakenly referred to Grubman’s employer as "Salomon Barney Frank," mixing up its name with the representative from Massachusetts.

The same people who cannot remember the names of major corporations pretend to understand accounting while they are preening before the television cameras. If these solons really knew how misleading corporate accounting was, surely they would have acted to correct the problem before now.

The reality is that they are as surprised as anyone by the accounting-related scandals that have taken place in recent months. They didn’t pass laws because they really don’t understand accounting very well. Their biggest illusion is that they have the power to force companies to be "truthful."

The pols have demanded that corporations present their financials in "black and white," not recognizing any gray area in the reporting of a company’s profits. Yet in practice, accounting is full of gray areas. This is the textbook definition of accrual accounting. It involves computing the expected cash consequences of business activities in the form of revenues or expenses. If more "precise" cash accounting were used, companies would not be able to compare their economic performance in different periods. Their accounting information would be more accurate, but it would be useless to outsiders.

The "matching principle" of accounting says that expenses should be recognized in the period when the revenue they generate is recognized, unless the expenses cannot be reasonably estimated yet. Sometimes, the value of expenses is hard to define, or the value is spread out over multiple accounting periods. Corporate assets are becoming increasingly difficult to value, since they consist of intangibles such as intellectual content, goodwill, and network advantages. Who but the management can reasonably estimate such things?

Oblivious to the realities of accounting, posturing politicians are now trying to centrally control corporate accounting standards. Yet, overly rigid accounting standards--the product of past government reform efforts--have created the problems we see today. In the past, financial reporting was based on broad principles that were relatively easy to apply. International and British accounting standards are still based on broad principles that govern basic situations. They do so on the theory that detailed rules are too easy to evade. Principle-based accounting works well, but the proliferation of lawsuits combined with the SEC’s regulatory zeal have caused auditors to abandon that approach.

The SEC now tries to impose rules to deal with nearly every ambiguous situation, in order to prevent every conceivable fraud or misleading representation. The government has pressured the Financial Accounting Standards Board (FASB), ostensibly a private regulatory body, to adopt overly complex and confusing rules.

Like alcohol prohibition laws, overly rigid accounting rules are easily evaded. Some companies evade them to improve accuracy, while others do it to artificially inflate their earnings. For good or for ill, slightly altering the nature of a transaction can generate a unique set of circumstances not covered by the overly specific accounting rules. This explains why misleading financial statements can be in full compliance with Generally Accepted Accounting Principles (GAAP).

Managerial discretion ensures that accounting will always be inexact. Yet, curtailing management discretion can only result in less informative accounting. Some companies develop a reputation for forecasting ability. Others develop a reputation for "missing" their numbers. Sometimes, forecasting accuracy will not become apparent for several quarters or even years. For regulators and politicians to pretend otherwise is pure folly.

Because the U.S. government is ratcheting up the regulation of accounting standards, earnings quality will actually suffer. With the threat of SEC investigations and lawsuits, no company will be able to make risky forecasts or assumptions in its financial reports. Therefore, internal forecasts and assumptions the company actually uses in its internal planning will be totally excluded from management’s discussion and analysis of its own books.  Information that is potentially valuable to investors will tend not to be disclosed, lest the forecasts turn out to be slightly flawed or mistimed.  CEOs do not want to be criminally prosecuted for possible errors by their employees.

The government class is set to amass tremendous new powers over accounting. Because it does not understand accounting, or apply any kind of accounting standards to itself, it does not even realize how its rules will only make things worse.  When the unintended consequences come to pass, expect politicians to demagogue the issue and propose even more stringent regulatory controls. They understand little about business, but they do understand that more regulation ultimately equals more campaign contributions.