GET NEWS AND ARTICLES IN YOUR INBOXPrint
A
A
Home | Mises Library | QE3: Sowing the Wind 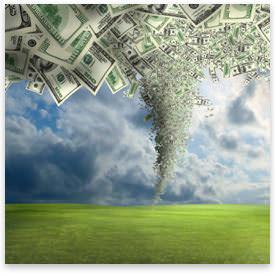 The US central bank announced on Thursday, September 13, 2012, that it will expand its holdings of long-term securities with open-ended purchases of $40 billion of mortgage debt a month as it seeks to boost economic growth and reduce unemployment.

In his press conference, following the conclusion of a two-day meeting of the Federal Open Market Committee (FOMC), the chairman of the Federal Reserve Board Ben Bernanke said the US central bank will continue buying assets, undertake additional purchases and employ other policy tools as appropriate if the outlook for the labor market does not improve substantially.

According to the Fed chairman, purchases of housing debt should help the housing market, which he called "one of the missing pistons in the engine." Bernanke holds that mortgage-backed securities purchases ought to drive down mortgage rates and create more demand for homes and more refinancing.

Some experts are of the view that the Fed could eventually buy more than $1 trillion in debt given the open-ended nature of its new policy.

The latest Fed policy is based on the work of Columbia professor of economics Michael Woodford regarding the policy options of the central bank when interest rates are near zero. Woodford argues that the best way to defeat stubborn economic weakness is to keep monetary policy very loose for longer than would otherwise be advisable.

According to this way of thinking the open-ended purchases of securities should help bolster the confidence of American consumers and businesses by showing that the central bank is determined to stop the economy from weakening. This, according to Bernanke (echoing Woodford), will make people more willing to invest, hire, and spend.

Note that what we have here is a suggestion of how to boost the demand for goods and services, which is seen as the stumbling block for the economic expansion. All that is required here is somehow to convince consumers and business that the Fed has the tools and the knowledge to revive the economy and strengthen the labor market.

Even if Woodford is right and from now onward consumers and businesses will be willing to boost their demand because they believe that the Fed is determined to stop the economy from weakening, this still may not work. We suggest that it is not enough to boost demand as such; what is required is the strengthening of effective demand. People's demand must be fully backed up by previously produced goods and services.

According to James Mill,

Furthermore, producers of final goods can also exchange them for various other goods such as tools and machinery in order to expand and enhance the existent infrastructure, which will permit an expansion of final consumer goods that promotes people's lives and well-being.

The Bernanke-Woodford plan, which is based on relentless monetary pumping, will lead to a weakening of the economy's ability to generate final goods and services in line with consumers' preferences. This will diminish rather than strengthen effective demand for goods and services.

The question that one needs to ask is why after lowering interest rates to zero and pumping over $2 trillion into the monetary system the economy remains subdued.

Most economists and other experts respond that we are currently in a unique situation brought about by various mysterious shocks. It is held that if it were not for the Fed's aggressive monetary pumping the economy would have suffered a massive economic depression by now: contrary to various critics, Bernanke's policy has, if anything, saved the economy and hence has been very effective.

(The Fed chairman however is of the view that at this stage the effectiveness of monetary policy might be diminishing. He holds that we now require some support from fiscal policy. In particular Bernanke warned that US economic recovery could be in jeopardy if lawmakers can't stop automatic year-end spending cuts and tax hikes from taking effect. The Fed chairman holds that the new central-bank stimulus efforts would not be enough to protect the economy from the twin shocks.)

We hold that it is a fallacy to suggest that Bernanke's monetary pumping has prevented the US economy from falling into a severe depression. What Bernanke's policy has done is to prevent the removal of various non-productive, wealth-destroying activities that emerged on the back of previous loose monetary and fiscal policies.

By introducing another massive monetary-pumping scheme Bernanke is running the risk of inflicting more damage to the process of real wealth generation. Consequently, this raises the likelihood that we could remain in depressed economic conditions over a prolonged period of time.

It must be realized that the damage inflicted on the economy by reckless monetary and fiscal policies cannot be fixed by further aggressive monetary pumping and by lifting people's confidence in the Fed's policies. What is needed to revive the economy is to stop the Fed and to cut government outlays to the bone.

The US central bank announced last Thursday that it will undertake open-ended purchases of $40 billion of mortgage debt per month until the labor market improves substantially. Fed chairman Ben Bernanke, who has introduced the new policy, is of the view that this will revive the economy. It is questionable why all this pumping should revive the economy given that the zero-interest-rate policy and the over $2 trillion in monetary pumping since 2008 haven't been successful. We suggest that by introducing further massive monetary pumping Bernanke is running the risk of severely damaging the US economy. Consequently, this raises the likelihood that the US could remain in a depressed economic state for a prolonged period of time.