Putting the Country Back on Gold 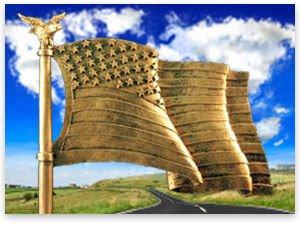 07/28/2011Robert P. Murphy
I have recently completed a study guide to Ludwig von Mises's classic work, The Theory of Money and Credit. (The PDF of the guide is available right now, and the physical book should be ready soon.)

In The Theory of Money and Credit, Mises integrated (what we now call) microeconomics and macroeconomics. He used subjective marginal utility theory to explain the purchasing power of money — a task that earlier pioneers in even Austrian economics hadn't accomplished. Furthermore, Mises drew on insights from Böhm-Bawerk, Wicksell, and the English Currency School to develop his circulation-credit theory of the trade cycle.

In the present article I'll focus on Mises's intriguing proposal for returning a country to a gold-backed currency. (This proposal is in the last section of the book, consisting of material written after World War II.)

Returning to Gold: The Problems

Before quoting Mises's proposal, let me set up the problem. The classical-liberal goal of "sound money" tied currencies to the precious metals. Just as a constitution was intended to restrain the arbitrary exercise of government power, the gold standard (or some other commodity standard) strictly limited the ability of a government to engage in inflation. The advocates of sound money had seen all too well the destructive consequences of the runaway printing press.

Now, purists can rightfully argue that no government scheme involving money will end well. It is certainly true that the optimal arrangement returns money and banking completely to the private sector, where there isn't even such a thing as a national currency, just as we don't have "national" computers or novels.

But there is such a qualitative difference between the classical gold standard of the late 19th century and the fiat-currency regimes of the late 20th century that many modern Austrian economists and libertarians urge the return to gold as a temporary solution. Given that the government is currently meddling with money and banking, returning to a gold standard is a very sensible move according to many Austrians.

Unfortunately, even though the proponents of sound money can all agree that FDR's actions in 1933 and Richard Nixon's actions in 1971 were despicable, they can't all agree on the best way to reverse those catastrophes. For example, suppose the government does indeed link the US dollar back to gold. What price should it use? The current market price? The Bretton Woods-era price of $35 per ounce? The pre-Roosevelt price of $20.67 an ounce?

To illustrate some of the problems, consider my own proposal from earlier this year. I suggested that Bernanke (and other Fed policymakers) could "go back on gold" immediately by switching from targeting the federal-funds rate to targeting the price of gold. I recommended that as the Fed's holdings of Treasury debt and other assets matured, it should replace them with physical gold. (This would reassure investors that the Fed would be able to maintain the peg.)

When it came to the crucial question of what price to set as the target, I decided quite arbitrarily on $2,000 per ounce. My reasoning went like this: When the Fed begins buying massive amounts of gold, the market value of gold relative to other goods and services will rise because there is a huge new buyer in the market for gold. Consequently, if the Fed locked in the current market price (which was around $1,400 when I first wrote the article), it would require price deflation for most other goods and services.

Not wanting to repeat the mistake of the British government when it went back to gold in 1925 at the pre–World War I parity — and thereby caused wrenching adjustment problems in British labor markets — I thought it wise for Bernanke to set the gold target price well above the market price on the day of the announcement. That way, the brunt of the adjustment (when the value of gold relative to everything else had to rise) would occur with just the price of gold rising (up to $2,000 per ounce).

"As we'll see, Mises's own proposal — written more than a half a century ago — is far superior to mine."

Needless to say, there are a few problems with my idea. The most obvious one is that I just picked $2,000 out of the air. Another problem was that there was no definite proportion of gold backing the outstanding quantity of dollars; I was simply recommending that Bernanke & Co. buy or sell assets in order to maintain the target price of gold.

As we'll see, Mises's own proposal — written more than a half a century ago — is far superior to mine.

Mises's Proposal to Link a Fiat Currency Back to Gold

In chapter 23, "The Return to Sound Money," Mises lays out his plan to return a fictitious country (Ruritania), with its currency (the rur), to the gold standard. The reader must remember that when Mises wrote this, the US dollar was still redeemable for gold at the rate of $35 per ounce. In the interest of accuracy, I have retained his original wording below, but in our times we can drop the references to the dollar and just focus on tying the rur back to gold:

From the point of view of monetary technique the stabilization of a national currency's exchange ratio as against foreign, less-inflated currencies or against gold is a simple matter. The preliminary step is to abstain from any further increase in the quantity of domestic currency. This will at the outset stop the further rise in foreign-exchange rates and the price of gold. After some oscillations a somewhat stable exchange rate will appear, the height of which depends on the purchasing-power parity. At this rate it no longer makes any difference whether one buys or sells against currency A or currency B.

But this stability cannot last indefinitely. While an increase in the production of gold or an increase in the issuance of dollars continues abroad, Ruritania now has a currency the quantity of which is rigidly limited. Under these conditions there can no longer prevail full correspondence between the movements of commodity prices on the Ruritanian markets and those on foreign markets. If prices in terms of gold or dollars are rising, those in terms of rurs will lag behind them or even drop. This means that the purchasing-power parity is changing. A tendency will emerge toward an enhancement of the price of the rur as expressed in gold or dollars. When this trend becomes manifest, the propitious moment for the completion of the monetary reform has arrived. The exchange rate that prevails on the market at this juncture is to be promulgated as the new legal parity between the rur and either gold or the dollar. Unconditional convertibility at this legal rate of every paper rur against gold or dollars and vice versa is henceforward to be the fundamental principle.

The reform thus consists of two measures. The first is to end inflation by setting an insurmountable barrier to any further increase in the supply of domestic money. The second is to prevent the relative deflation that the first measure will, after a certain time, bring about in terms of other currencies the supply of which is not rigidly limited in the same way. As soon as the second step has been taken, any amount of rurs can be converted into gold or dollars without any delay and any amount of gold or dollars into rurs. The agency, whatever its appellation may be, that the reform law entrusts with the performance of these exchange operations needs for technical reasons a certain small reserve of gold or dollars. But its main concern is, at least in the initial stage of its functioning, how to provide the rurs necessary for the exchange of gold or foreign currency against rurs. To enable the agency to perform this task, it has to be entitled to issue additional rurs against a full — 100 percent — coverage by gold or foreign exchange bought from the public.

In this brief passage Mises offers a proposal that avoids the problems we discussed in the previous section. There is no arbitrary selection of a gold price; Mises lets the market do that.

But what about the gold backing of the currency? The reason I had thought the central bank needed to change the composition of its assets from bonds into gold was to reassure investors that the new peg would indeed be maintained. Here too Mises has an elegant answer: from the moment the new policy goes into effect, any new issue of currency must be backed 100 percent by gold held by the monetary authority.

It is true that the total quantity of money will not be backed 100 percent by gold in the government's vaults, but nonetheless investors would know that from the date of the reform, all additions were fully backed. This is a very nonarbitrary and sensible approach, yielding two desirable outcomes. First, the government wouldn't need to absorb a large fraction of the stock of gold from the private sector early on. Second, as the quantity of domestic currency expanded over time, a larger and larger fraction of the currency would be backed by gold.

When it comes to "second-best" policy recommendations in a world of government intervention, we can never find perfection (by definition). But if we are going to have the government providing a monopoly of domestic currency, Ludwig von Mises's proposal for a return to a gold standard is theoretically elegant and eminently practical.