GET NEWS AND ARTICLES IN YOUR INBOXPrint
A
A
Home | Mises Library | Production, Enterprise, and Service to Society 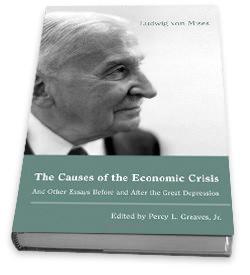 [Excerpted from The Causes of the Economic Crisis]

The Marxian critique censures the capitalistic social order for the anarchy and planlessness of its production methods. Allegedly, every entrepreneur produces blindly, guided only by his desire for profit, without any concern as to whether his action satisfies a need. Thus, for Marxists, it is not surprising if severe disturbances appear again and again in the form of periodical economic crises. They maintain it would be futile to fight against all this with capitalism. It is their contention that only socialism will provide the remedy by replacing the anarchistic profit economy with a planned economic system aimed at the satisfaction of needs.

Yet, the expression "anarchy" carries with it other connotations. We usually use the word "anarchy" to refer to social conditions in which, for lack of a governmental apparatus of force to protect peace and respect for the law, the chaos of continual conflict prevails. The word "anarchy," therefore, is associated with the concept of intolerable conditions. Marxian theorists delight in using such expressions. Marxian theory needs the implications such expressions give to arouse the emotional sympathies and antipathies that are likely to hinder critical analysis. The "anarchy of production" slogan has performed this service to perfection. Whole generations have permitted it to confuse them. It has influenced the economic and political ideas of all currently active political parties and, to a remarkable extent, even those parties which loudly proclaim themselves anti-Marxist.

The Role and Rule of Consumers

Even if the capitalistic method of production were "anarchistic," i.e., lacking systematic regulation from a central office, and even if individual entrepreneurs and capitalists did, in the hope of profit, direct their actions independently of one another, it is still completely wrong to suppose they have no guide for arranging production to satisfy need. It is inherent in the nature of the capitalistic economy that, in the final analysis, the employment of the factors of production is aimed only toward serving the wishes of consumers.

In allocating labor and capital goods, the entrepreneurs and the capitalists are bound, by forces they are unable to escape, to satisfy the needs of consumers as fully as possible given the state of economic wealth and technology. Thus, the contrast drawn between the capitalistic method of production, as production for profit, and the socialistic method, as production for use, is completely misleading. In the capitalistic economy, it is consumer demand that determines the pattern and direction of production, precisely because entrepreneurs and capitalists must consider the profitability of their enterprises.

An economy based on private ownership of the factors of production becomes meaningful through the market. The market operates by shifting the height of prices so that again and again demand and supply will tend to coincide. If demand for a good goes up, then its price rises, and this price rise leads to an increase in supply. Entrepreneurs try to produce those goods the sale of which offers them the highest possible gain. They expand production of any particular item up to the point at which it ceases to be profitable. If the entrepreneur produces only those goods whose sale gives promise of yielding a profit, this means that they are producing no commodities for the manufacture of which labor and capital goods must be used which are needed for the manufacture of other commodities more urgently desired by consumers.

In the final analysis, it is the consumers who decide what shall be produced and how. The law of the market compels entrepreneurs and capitalists to obey the orders of consumers and to fulfill their wishes with the least expenditure of time, labor, and capital goods. Competition on the market sees to it that entrepreneurs and capitalists who are not up to this task will lose their position of control over the production process. If they cannot survive in competition, that is, in satisfying the wishes of consumers cheaper and better, then they suffer losses which diminish their importance in the economic process. If they do not soon correct the shortcomings in the management of their enterprise and capital investment, they are eliminated completely through the loss of their capital and entrepreneurial position. Henceforth, they must be content as employees with a more modest role and reduced income.

The law of the market applies to labor also. Like other factors of production, labor is also valued according to its usefulness in satisfying human wants. Its price, the wage rate, is a market phenomenon like any other market phenomenon, determined by supply and demand, by the value the product of labor has in the eye of consumers. By shifting the height of wages, the market directs workers into those branches of production in which they are most urgently needed. Thus the market supplies to each type of employment that quality and quantity of labor needed to satisfy consumer wants in the best possible way.

In the feudal society, men became rich by war and conquest and through the largesse of the sovereign ruler. Men became poor if they were defeated in battle or if they fell from the monarch's good graces. In the capitalistic society, men become rich — directly as the producer of consumers' goods, or indirectly as the producer of raw materials and semiproduced factors of production — by serving consumers in large numbers. This means that men who become rich in the capitalistic society are serving the people. The capitalistic market economy is a democracy in which every penny constitutes a vote. The wealth of the successful businessman is the result of a consumer plebiscite. Wealth, once acquired, can be preserved only by those who keep on earning it anew by satisfying the wishes of consumers.

The capitalistic social order, therefore, is an economic democracy in the strictest sense of the word. In the last analysis, all decisions are dependent on the will of the people as consumers. Thus, whenever there is a conflict between consumers' views and those of the business managers, market pressures assure that the views of the consumers win out eventually. This is certainly something very different from the pseudo–economic democracy toward which the labor unions are aiming. In such a system as they propose, the people are supposed to direct production as producers, not as consumers. They would exercise influence, not as buyers of products, but as sellers of labor, that is, as sellers of one of the factors of production. If this system were carried out, it would disorganize the entire production apparatus and thus destroy our civilization. The absurdity of this position becomes apparent simply upon considering that production is not an end in itself. Its purpose is to serve consumption.

Under pressure of the market, entrepreneurs and capitalists must order production so as to carry out the wishes of consumers. The arrangements they make and what they ask of workers is always determined by the need to satisfy the most urgent wants of consumers. It is precisely this which guarantees that the will of the consumer shall be the only guideline for business. Yet capitalism is usually reproached for placing the logic of expediency above sentiment and arranging things in the economy dispassionately and impersonally for monetary profit only.

It is because the market compels the entrepreneur to conduct his business so that he derives from it the greatest possible return that the wants of consumers are covered in the best and cheapest way. If potential profit were no longer taken into consideration by enterprises, but instead the workers' wishes became the criterion, so that work was arranged for their greatest convenience, then the interests of consumers would be injured. If the entrepreneur aims at the highest possible profit, he performs a service to society in managing an enterprise. Whoever hinders him from doing this, in order to give preference to considerations other than those of business profits, acts against the interests of society and imperils the satisfaction of consumer needs.

Workers and consumers are, of course, identical. If we distinguish between them, we are only differentiating mentally between their respective functions within the economic framework. We should not let this lead us into the error of thinking they are different groups of people. The fact that entrepreneurs and capitalists also are consuming plays a less important role quantitatively; for the market economy, the significant consumption is mass consumption.

Directly or indirectly, capitalistic production serves primarily the consumption of the masses. The only way to improve the situation of the consumer, therefore, is to make enterprises still more productive, or as people may say today, to "rationalize" still further. Only if one wants to reduce consumption should one urge what is known as "producers' policy" — specifically the adoption of those measures which place the interests of producers over those of consumers.

Opposition to the economic laws which the market decrees for production must always be at the expense of consumption. This should be kept in mind whenever interventions are advocated to free producers from the necessity of complying with the market.

The market processes give meaning to the capitalistic economy. They place entrepreneurs and capitalists in the service of satisfying the wants of consumers. If the workings of these complex processes are interfered with, then disturbances are brought about which hamper the adjustment of supply to demand and lead production astray, along paths which keep them from attaining the goal of economic action — i.e., the satisfaction of wants.

These disturbances constitute the economic crisis.