The Police State Abolishes the Trial 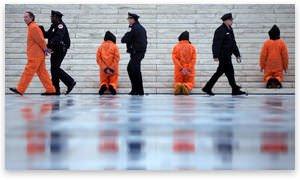 Several years ago, the police entered the office of a young professor at a reputable university and arrested him for an online crime. They took the professor away, booked him, and then offered him a deal: admit guilt and get off easy.

The professor said to the few people to whom he was permitted to speak that this was crazy because he was innocent.

His lawyer warned him: fight this and you could get life; admit guilt and you will get a suspended sentence. He took the deal. It was a trick. Now he languishes in jail, his life wrecked as far into the future as he can see.

This doesn't happen in America, does it? Yes, it does. Not only that, it is increasingly the norm. Those raised on a steady diet of courtroom television shows believe that they are true to the way justice is meted out. This is completely naive. Trials in federal criminal cases are rare. Nine in ten cases are settled in pleas like the above case. Only 3 percent of the cases go to trial. Among those that go to trial, the defendant wins once in every 212 times.

What this means is that there is no way out for the accused. The prosecutors have all the power. Not even the judge has discretion, because lawmakers have mostly taken that liberality away in the name of cracking down on crime. This happened all through the 1980s and 1990s, and the prosecutorial dictatorship has entrenched itself to become the norm since 2001. For the last ten years, the police state has had free rein.

It was not "liberals" or "conservatives" who did this. It was both parties acting with the massive support of the American public, as tyrants in the public sector licked their chops. This was a result of security-minded madness, and even now hardly anyone cares.

Today, every single citizen, no matter how free he or she may feel in daily life, is in reality a sitting duck. You can be made to disappear. There is essentially no way you can escape once the feds sweep you into their net. There is no justice. The total states of the past used to pretend to have trial-based convictions. The total state of the present doesn't even bother. It just puts a sack over your head and takes you away.

What happens then? Your loved ones cry. They try to move close by to where you are holed up, typically several states away. They are bankrupted and ruined. And what of your coworkers, your friends, your social set? They might want to help. They might feel bad for you. But the fact is that you pleaded guilty, and you have not even a chance to tell your side of the story. For all anyone knows, you got exactly what you deserved. So they do the only thing they can do: they forget about you.

And there you languish until the system decides you are taking up too much room. Perhaps it is ten years. Maybe twenty. At some point, the doors open again and you are free. But you are ruined: bitter, talentless, emotionally changed, physically debilitated, and — if you are young and slim — gang raped. There is no point in contacting the friends that abandoned you. Members of your family have moved on; they have lives, too, and had to live them out. In terms of employment, you are a washed up ex-con.

These people are politically, socially, culturally, and economically invisible. How many are actually guilty? We can't know. How many could be let out today to make a wonderful contribution to building a productive society? We don't know. How many are completely nonviolent, not even guilty by any normal standard of law but only guilty according to the letter of the current dictatorship? Probably a majority. Perhaps a large majority. In the New Testament, visiting prisoners is equated, as a good deed, to visiting the sick. And we do not think of the sick as guilty.

Yet the rise and entrenchment of the American police state are rarely questioned. Public opinion is mostly happy with the whole thing. There can never be too much prosecutorial power, never too many police, never too many prisons, never sentences that are too long. No one says, "We should not be so tough." The entire ethos is the opposite. A rare story such as the one in the New York Times recently is too little to wake anyone up.

How could this have happened in America? Well, looking back, it seems that it all stems from a single flaw: the belief that the most essential institution in society is the state that protects us from criminality and must maintain a monopoly over justice. Some of the greatest defenders of freedom otherwise have been happy to make this one concession to the state. And this one concession is now a major source of our undoing as a free people.

There are reforms that we can make. No more plea bargains in federal cases. Restore basic human rights. Give judges and juries back their discretion to evaluate each case, and permit them to rule on the merit of the law, too, in the common-law tradition. A push back to grant basic constitutional protections would be a good first step.

However, in the end, what is really needed is a fundamental rethinking of the notion that the state rather than private markets must monopolize the provision of justice and security. This is the fatal conceit. No power granted to the state goes unabused. This power, among all possible powers, might be the most important one to take away from the state.