A Penchant for Controlling Others 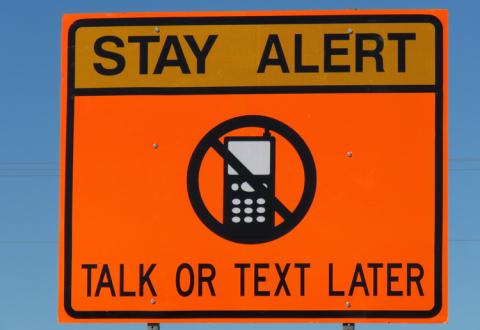 [Editor's Note: In this 2009 article, Lew Rockwell lists the problems with government mandates on private use of mobile phones. Observant readers will note the "public safety" arguments against the freedom to use phones as we choose are essentially the same as current claims that "public health" is a justification for dictating daily habits and behavior. ]

We all want freedom for ourselves, but many people have doubts about the way others might use their own freedom. Under these conditions, the state is there to help. Get enough people to favor enough restriction, and the state is good to go, administering every aspect of life from its smallest to its largest detail.

Every day presents more cases, but the most recent case is stunning. It turns out that 97% of people polled support a universal ban on texting while driving. Half of those surveyed say that the penalty should be as severe as that for drunk driving. Among these, how many do you suppose do text and drive but don't want to admit it to the pollster? Probably plenty. And yet I couldn't find a single online defense of the practice anywhere on the web.

The truth is that it is not necessarily unsafe to text behind the wheel. It all depends on the situation. If you are in a traffic jam, and are late to an appointment, the ability to text can be a lifesaver. Or if there are no cars around, you might be able to risk it. On the other hand, it would probably be a mistake to attempt this doing 80 mph around slower traffic on a freeway.

How can we know the difference between when it is safe and when it is not? The principle applied on American roads is that the driver himself makes that decision. If this principle didn't make sense, there would be no way that the roads themselves could work at all.

Think of this the next time you are in a big city zooming around curves and between lanes along with thousands of others, doing top speeds. Here we have 4,000-pound hunks of steel barreling down the road without aids other than a dotted yellow line on the road. These are real-life death machines in which one wrong move could cause a 100-car pileup and mass death. We do it anyway.

What's remarkable is not that there are so many wrecks. The miracle is that it works at all and that, for the most part, people get to where they are going. And consider too the demographic behind the car: old, young, abled, disabled, experienced, inexperienced. Some people have a facility for driving and others do not. Some people have spatial agility and others do not.

How does it all work? Don't tell me that it is due to central planning and the police. The police aren't driving every car and controlling every wheel. Our human volition on the road and the decisions we make that affect other drivers are nearly 100% our own.

And yet it works. Why? The reason is that it is not in anyone's interest to get in a crash. It is in everyone's interest to get to where one is going in one piece and to do it efficiently. Roll together tens of thousands of people with the same broad goal and you get spontaneous cooperation. Something that people normally think could not work does in fact work. Looked at from that angle, the orderliness we see on the roads is a general expression of the capacity for human society to work in the context of self-interested individualism.

Now think of this poll showing a widespread opposition to texting while driving. I submit that you would get similar results from a poll that asked people about the right to drive:

Do you support or oppose the right of everyone to own 4,000-pound heaps of steel and control them completely and autonomously at top speeds in the midst of thousands of other citizens whose lives could be in danger with so much as a slight flick of the wrist to the right or left?

That question could elicit nearly 100% negative results. We generally trust our capacity to manage ourselves but we do not trust the capacity of others to manage themselves. And we surely don't believe that society can generally function well under conditions of freedom. Even though we live in the midst of spontaneous order and use its brilliance every day (grocery store, the world wide web, restaurants, housing developments), we don't really understand it.

Or how about this one:

Do you support the right of anyone over a certain age to buy and consume as much hard liquor as he wants, even to the point of drinking himself into a life-threatening stupor, neglecting the kids, wrecking family life, and killing brain cells that cannot be replaced?

Probably most people would say no. And yet this is precisely the reasoning behind Prohibition, which most people today regard as a terrible error. Today, we supposedly realize that the social cost of the right to drink hard liquor was greater than the supposed benefit we receive from enforcing Prohibition.

So it is with texting and driving. There are times when it is safe. There are times when it is not safe. The only ones who can really know the difference are the people behind the wheel. These people already enjoy the freedom to talk to passengers, to fiddle with their stereo, to drive following an exhausting jog, to drive while distracted with anxieties over work and marriage, to pray or sing in the car, and do many other things that seem like a distraction from the goal at hand. Somehow it all works, and there is a lesson here. You can count on more order to emerge from trusting freedom than you get from attempting to micromanage people's lives.

Now, the libertarians among us might point out that these roads are publicly owned and that this is the core source of the problem. Under privately owned roads, there might be intense restrictions on what you can and cannot do and these might be part of the contract you make with the road owner.

The market would take care of the rest. If an owner were too restrictive, drivers would take other routes. If they are too lenient, their insurance premiums would rise and they would pay too high a price. The resultant rules of the road would be a result of this careful calibration, tested constantly by the forces of supply and demand.

Under the existing rules of private roads, we see no evidence of a crackdown on texting. Maybe it would come in the future, but at least there would be a market test. When a rule fails in private markets, the rule is changed.

But it is different with government. No matter how preposterous the rule, it stays and stays, regardless of whether it works to accomplish its end. And there can be no question that a crackdown on texting is coming. Obama has already banned texting while driving for federal workers. A bill that would deny federal funds to states is flying through the Senate. Look for a nationwide ban in the coming months.

The ban says, You don't know what is good for you so you must be forced to do what the government thinks is good for you. The ban gets support because people generally think that while they are responsible and good at calibrating what is safe and unsafe, others are not. Through this method, all freedoms could be abolished.

It's a bad way to form the rules of a society.