GET NEWS AND ARTICLES IN YOUR INBOXPrint
A
A
Home | Mises Library | Outlawing Jobs: The Minimum Wage 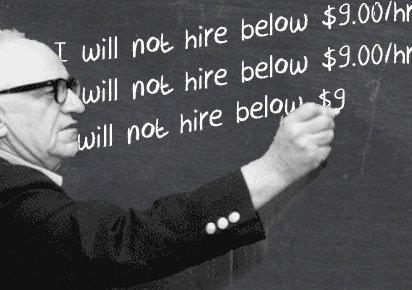 There is no clearer demonstration of the essential identity of the two political parties than their position on the minimum wage. The Democrats proposed to raise the legal minimum wage from $3.35 an hour, to which it had been raised by the Reagan administration during its allegedly free-market salad days in 1981. The Republican counter was to allow a "subminimum" wage for teenagers, who, as marginal workers, are the ones who are indeed hardest hit by any legal minimum.

This stand was quickly modified by the Republicans in Congress, who proceeded to argue for a teenage subminimum that would last only a piddling 90 days, after which the rate would rise to the higher Democratic minimum (of $4.55 an hour.) It was left, ironically enough, for Senator Edward Kennedy to point out the ludicrous economic effect of this proposal: to induce employers to hire teenagers and then fire them after 89 days, to rehire others the day after.

Finally, and characteristically, George Bush got the Republicans out of this hole by throwing in the towel altogether, and plumping for a Democratic plan, period. We were left with the Democrats forthrightly proposing a big increase in the minimum wage, and the Republicans, after a series of illogical waffles, finally going along with the program.

In truth, there is only one way to regard a minimum wage law: it is compulsory unemployment, period. The law says: it is illegal, and therefore criminal, for anyone to hire anyone else below the level of X dollars an hour. This means, plainly and simply, that a large number of free and voluntary wage contracts are now outlawed and hence that there will be a large amount of unemployment. Remember that the minimum wage law provides no jobs; it only outlaws them; and outlawed jobs are the inevitable result.

All demand curves are falling, and the demand for hiring labor is no exception. Hence, laws that prohibit employment at any wage that is relevant to the market (a minimum wage of 10 cents an hour would have little or no impact) must result in outlawing employment and hence causing unemployment.

If the minimum wage is, in short, raised from $3.35 to $4.55 an hour, the consequence is to disemploy, permanently, those who would have been hired at rates in between these two rates. Since the demand curve for any sort of labor (as for any factor of production) is set by the perceived marginal productivity of that labor, this means that the people who will be disemployed and devastated by this prohibition will be precisely the "marginal" (lowest wage) workers, e.g. blacks and teenagers, the very workers whom the advocates of the minimum wage are claiming to foster and protect.

The advocates of the minimum wage and its periodic boosting reply that all this is scare talk and that minimum wage rates do not and never have caused any unemployment. The proper riposte is to raise them one better; all right, if the minimum wage is such a wonderful anti-poverty measure, and can have no unemployment-raising effects, why are you such pikers? Why you are helping the working poor by such piddling amounts? Why stop at $4.55 an hour? Why not $10 an hour? $100? $1,000?

It is obvious that the minimum wage advocates do not pursue their own logic, because if they push it to such heights, virtually the entire labor force will be disemployed. In short, you can have as much unemployment as you want, simply by pushing the legally minimum wage high enough.

It is conventional among economists to be polite, to assume that economic fallacy is solely the result of intellectual error. But there are times when decorousness is seriously misleading, or, as Oscar Wilde once wrote, "when speaking one's mind becomes more than a duty; it becomes a positive pleasure." For if proponents of the higher minimum wage were simply wrongheaded people of good will, they would not stop at $3 or $4 an hour, but indeed would pursue their dimwit logic into the stratosphere.

The fact is that they have always been shrewd enough to stop their minimum wage demands at the point where only marginal workers are affected, and where there is no danger of disemploying, for example, white adult male workers with union seniority. When we see that the most ardent advocates of the minimum wage law have been the AFL-CIO, and that the concrete effect of the minimum wage laws has been to cripple the low-wage competition of the marginal workers as against higher-wage workers with union seniority, the true motivation of the agitation for the minimum wage becomes apparent.

This is only one of a large number of cases where a seemingly purblind persistence in economic fallacy only serves as a mask for special privilege at the expense of those who are supposedly to be "helped."

In the current agitation, inflation--supposedly brought to a halt by the Reagan administration--has eroded the impact of the last minimum wage hike in 1981, reducing the real impact of the minimum wage by 23%. Partially as a result, the unemployment rate has fallen from 11% in 1982 to under six percent in 1988. Possibly chagrined by this drop, the AFL-CIO and its allies are pushing to rectify this condition, and to boost the minimum wage rate by 34%.

Once in a while, AFL-CIO economists and other knowledgeable liberals will drop their mask of economic fallacy and candidly admit that their actions will cause unemployment; they then proceed to justify themselves by claiming that it is more "dignified" for a worker to be on welfare than to work at a low wage. This of course, is the doctrine of many people on welfare themselves. It is truly a strange concept of "dignity" that has been fostered by the interlocking minimum wage-welfare system.

Unfortunately, this system does not give those numerous workers who still prefer to be producers rather than parasites the privilege of making their own free choice.

[This piece originally appeared in the December 1988 issue of The Free Market and is also included in the collection Making Economic Sense.]