A Nudge in the Wrong Direction 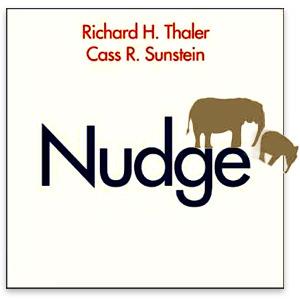 Libertarian Paternalism. It would appear to be a contradiction in terms. But Richard Thaler and Cass Sunstein argue for just such a thing in Nudge (Yale University Press, 2008). They try to combine the two by arguing that a nudge — "any aspect of the choice architecture that alters people's behavior in a predictable way without forbidding any options or significantly changing their economic incentives" — can benefit those nudged, while staying consistent with liberty because it does not force anyone to do anything.

Given the authors' connections to Barack Obama, Nudge and earlier work by its authors have gotten more attention than they otherwise would, and several positive reviews (though, tellingly, not from libertarians). On the other hand, those who consider issues of liberty more carefully have been less kind to their arguments, notably David Gordon, "Libertarian Paternalism," Gregory Mitchell, "Libertarian Paternalism is an Oxymoron," and Richard Epstein, Skepticism and Freedom.

While those interested in liberty should read those and other careful considerations of the theory behind Nudge, there is another fatal but overlooked flaw in the book's argument. They begin by assuming that people's current choices reflect the results when they are left alone to make them (i.e., reflecting self-ownership and voluntary market choices). That is why any shortcomings must be the fault of irrational individuals, who need paternalistic nudges to improve things. However, our current savings, organ-donation, and health choices are not those of free individuals; they are the choices made in large part because current government policies — taxes, regulations, mandates, etc. — impair incentives. They are government failures presented as market failures.

Consider Americans' famously low rate of saving, the most important "market failure" a nudge is supposed to help offset. The real problem is that government policies do so much to discourage saving.

People have been led to substitute Social Security's vastly underfunded promise of retirement benefits for funds they would have saved for their retirement. And since promised benefits are far higher than current rates of taxation can sustain, they anticipate being richer in retirement than they will actually be, reducing saving even more. Those who save enough to provide well for their retirement also face paying income taxes on up to 85% of their Social Security benefits as a result.

Taxes on capital also reduce saving, by reducing the after-tax return on saving and investment. These include property taxes that, while relatively small percentages of the capital invested, are sizable fractions of the annual income generated. Then state and federal (and sometimes local) corporate taxes take further bites from that income, further reducing the after-tax return. The implicit tax imposed by regulatory burdens must also be borne before earnings can go to investors.

Personal income taxes reduce saving even more. Investment income left after other taxes is taxed again if paid out as dividends. Further, earnings from saving and investment can trigger additional tax burdens by triggering phase-outs of deductions and exemptions that are allowed. If investment earnings are retained and reinvested, increasing asset values, they are taxed as capital gains upon sale. And even increases in asset values that only reflect inflation are taxed as if they were real increases in wealth.

Other government policies also reduce saving. Medicare coverage reduces a major reason to save. Further, current earners, who must cover three quarters of its cost, are left with less to save. The fact that Medicaid covers nursing-home costs only after one's assets are virtually exhausted reduces another motive to save. Unemployment benefits, along with food stamps and other means-tested benefits, reduce the need to set aside a nest egg "just in case." Estate taxes (which will be phased out by 2010, but reinstated in full force in 2011) also reduce successful savers' ability to pass on assets as bequests, undermining another major motive to save.

Each of these government policies acts as a disincentive to save. Together, they punish saving heavily, reducing it to the point that many do not have any appreciable savings. But fixing that saving problem doesn't require ever more government programs to help us, force us, or nudge us to save more; it only requires that the government stop undermining our incentives to save in all the ways it does now.

Consider also the "shortage" of organ donations. The root cause is not a market failure, to be fixed by making donation automatic unless one opts out. The root cause is that government has already taken away potential donors' ownership of their own body parts. Unlike everyone else involved in the big business of transplants — doctors, nurses, hospitals, drug makers, etc. — all of whom are paid — organ donors (or their heirs) are not allowed to be paid. When potential donors of very valuable organs cannot be compensated, the result is like every other government price ceiling imposed on sellers — a shortage. One needs no assumption of individual irrationality to explain the problem. And the solution to problems arising because government doesn't allow donors to benefit from markets in organs is not a government nudge in the opposite direction; it is to stop hindering the market.

Health-related issues (diet, smoking, etc.) suffer from similar problems. The costs of health problems that result once one becomes eligible for Medicare coverage are not borne by the individual (as they would be with true private insurance) as presently all are charged the same premiums, regardless of weight, smoking history, or any other factor. Similar results arise from premiums that do not vary with such circumstances in employer-provided group health insurance (which exists largely because it is not subject to income taxation). The possibilities of declaring bankruptcy, of using emergency rooms without having to be able to pay, or of becoming a Medicaid recipient if medical bills become large enough are further ways government has made it possible to impose many of the health-care costs of individuals' own choices on others. When government makes the price of health problems artificially low to those individuals making the choices, it is no wonder those choices are not as good as we would like.

The problem with any logical argument is that if one starts from false premises, even airtight logic does not guarantee correct results. Nudge's argument is far from airtight. But even more devastating is its reliance on a false premise. The "market failure" examples it promises to improve are actually government failures. And the solution to government failure is to reduce the disincentives that government causes, not to intervene further, however mild its authors find the additional intervention.

Nudge's blaming of "irrational" individuals and markets for the results of government-caused distortions is not even new. For instance, it parallels the Keynesian attribution of the business climate in the Depression to the (irrational) "animal spirits of investors," when, in fact, Hoover and FDR's massive interventions (e.g., the Smoot-Hawley tariff, the National Industrial Recovery Act, tax increases, mandatory wage increases, FDR's attacks on businessmen who resisted his plans as "economic royalists", etc.) were among the irrational government causes that would deter any rational investor. Going even further back, as David Gordon observed, any claim that Nudge has to being a kinder, gentler form of paternalism that is compatible with liberty is dashed by Alexis de Tocqueville. In Democracy in America, he described the consequences of that approach:

"Above this race of men stands an immense and tutelary power, which takes upon itself alone to secure their gratifications and to watch over their fate. That power is absolute, minute, regular, provident, and mild… The will of man is not shattered, but softened, bent, and guided; men are seldom forced by it to act, but they are constantly restrained from acting. Such a power does not destroy, but it prevents existence; it does not tyrannize, but it compresses, enervates, extinguishes, and stupefies a people, till each nation is reduced to nothing better than a flock of timid and industrious animals, of which the government is the shepherd."

Thaler and Sunstein claim to be trying "to influence choices in a way that will make choosers better off, as judged by themselves." But in their reasoning, they ignore how much those choices are actually currently caused by existing government interventions — both paternalistic and predatory (to pay for the paternalism), making their prescriptions little more than distractions, directing attention away from the real source — government — and real solution: expanding liberty.

What undermines their attractive-sounding sales pitch that "if incentives and nudges replace requirements and bans, government will be both smaller and more modest," is that they are not in fact proposing less intrusive government nudges to replace more intrusive government coercion, but yet still more government on top of what we have today.