GET NEWS AND ARTICLES IN YOUR INBOXPrint
A
A
Home | Mises Library | Not Enough Inflation? 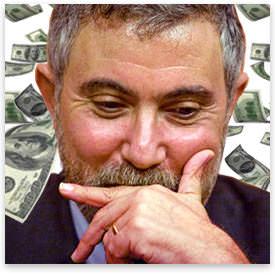 Paul Krugman, in his recent New York Times column "Not Enough Inflation" (April 5, 2012), argues that what is most needed now to increase employment is more inflation. The Federal Reserve's dual mandate, full employment and price stability, is relevant and important. Since we have "more or less price stability" but are "nowhere near full employment," the "Fed is doing too little, not too much."

Joseph Salerno, in a recent post on Circle Bastiat, included Professor Krugman in an "elite" group of economists, including the IMF's Olivier Blanchard, Ivy League Professors Ken Rogoff and Greg Mankiw, and Fed chairman Bernanke, who believe, a la a stable Phillips curve, that "an acceleration of the inflation rate is the panacea for the still ailing U.S. economy."

I often hear people saying that the experience of the 70s refuted the whole notion of a Phillips curve. No, it didn't. What it did was show that unemployment wasn't the only determinant of current inflation; expected inflation was also crucial.

For Krugman, the expectations-augmented Phillips curve does not, as it did for many economists, provide a warning about the long-run ineffectiveness of monetary policies targeting high employment, it only "implied … 'clockwise spirals' in unemployment-inflation space."

He provides the following chart to illustrate such spirals for the disinflationary periods in the mid-1970s and 1980–84 and the apparent breakdown of the spirals in the current "lesser depression." He attributes this breakdown to nominal wage rigidity in a low-inflation environment. His conclusion, which may be right, but for the wrong reason, is "price stability isn't an adequate guideline for monetary policy."

For Krugman, the lesson to be learned from the recent data is that "you can have stable prices and a persistently depressed economy." But instead of looking for microeconomic impediments to recovery, such as "regime uncertainty," he argues for increased monetary and fiscal stimulation.

A closer look at the actual data reveals that what Krugman conveniently chooses to leave out: the policy-induced inflationary spirals that moved the economy from a low-inflation environment to the high-inflation and high-unemployment situations in the 1970s and early 1980s, from which Krugman starts his story, are extremely important for understanding the long-run impact of inflationary policies aimed at reducing unemployment. If one takes a long-run perspective, the data actually undermine his argument that what is needed now is more inflation.

Gerald Stone's CoreMacroeconomics (Worth Publishers 2012, pp. 314–326, 328–331) provides more detail. The 1960s began with a situation similar to today's inflation-unemployment nexus. In 1961 inflation was near 1 percent with unemployment slightly high, just under 7 percent. By 1969, inflation had accelerated to nearly 5 percent as unemployment dropped to just above 3 percent (Stone, figure 3, p. 317). So far so good for the higher-inflation-as-a-panacea-for-lower-unemployment crowd. However, by 1973 inflation remained above 5 percent, but unemployment now was 5 percent (Stone, figure 4, p. 317). The situation continued to deteriorate: both inflation and unemployment approached double digit levels, as the economy more quickly adjusted to Federal Reserve go-stop policies (Stone Figure 6, p. 320).

An Austrian perspective, not a natural-unemployment-rate framework, provides a better understanding of the past and more correct policy implications for the future. Hayek's comments on how to respond to the stagflation of the mid 1970s, created by attempts to maintain high employment through monetary ease, should be a warning to current policy makers. Hayek commented,

I find myself in an unpleasant situation. I had preached for forty years that the time to prevent the coming of a depression is during the boom. During the boom nobody listened to me. Now people again turn to me and ask how we can avoid the consequences of a policy about which I had constantly warned. I must witness the heads of governments of all Western industrial countries promising their people that they will stop the inflation and preserve full employment. But I know that they cannot do this. I even fear that attempts to postpone the inevitable crisis by a new inflationary path may temporarily succeed and make the eventual breakdown even worse. (Hayek, 1979, p. 3)

In an Austrian framework, as in a natural-rate-of-unemployment model, monetary expansion and a low (relative to the natural rate) interest rate may increase employment; the policy may appear to succeed. But, as Hayek and Mises emphasized long before the development of modern macroeconomics, the employment created by stimulus, whether monetary or fiscal, and whether implemented when an economy is near full employment or initiated at a point where significant unemployed resources are available (Hayek 1939 and Ravier 2011) is unstable. Such employment, if it is to be maintained, will require ever-increasing distortions to the spending stream. A policy that uses inflation to generate employment hence contains the seeds of a return to stagflation, and if continually attempted every time unemployment begins to increase, ultimately, to the choice whether to end the inflation or move forward on a wrong path to a eventual crack-up boom.

Recommendations to speed recovery with inflationary policy are a consequence of too many pundits and economists too quickly attempting to compare the crisis to the Great Depression. While there should be concern that such an event never happen again, attention should also be focused on policies that will prevent a return of the stagflation the 1970s and 1980s. The "Great Moderation," a nearly 20-year period of economic growth and low inflation, made it appear that policy makers had learned the lessons from policy errors made between 1960 and 1980. A shift in monetary policy emphasis from high employment to price stability — which even Hayek argued might be the best policy to be expected from a central-bank-headed fiat-money regime — appeared until 2000 to be successful. Two Austrian-style boom-bust periods ended the appearance of macroeconomic tranquility.

The first boom-bust, circa 1995–2000, provided evidence that, per Hayek in the 1930s (sounding much like Krugman now), "price stability isn't an adequate guideline for monetary policy." The reason, contra Krugman, is that a monetary shock that accommodates a productivity shock generates a boom. For this period, this is illustrated by real GDP above potential GDP. The resulting "bust," at least measured in terms of the cycle impact on GDP, was relatively mild.

However, the mild recession was followed by a relatively slow, jobless recovery. This led many economists, including Krugman and pundits, as is now happening, to encourage the Fed to reinflate — create another boom or bubble — to ignite growth and employment. Thus the Fed turned to monetary excess. Interest rates were kept too low for too long, which led to "a boom and an inevitable bust" (Taylor, 2008, emphasis mine). This housing-bubble-led boom-bust is an excellent example of Hayek's and ([1939b] 1975) and Ravier's (2011) misdirection of production that results from monetary stimulus of an economy currently operating below potential. This monetary policy, designed to reduce unemployment in the short run, became a cause of "more unemployment than the amount it was originally designed to prevent" (Hayek, 1979, p. 11 and Ravier 2010, especially Grafico IV, p. 116).

More inflation now would just repeat the mistake, trading some lower unemployment now for more unemployment and more inflation in the future. To avoid holding a tiger by the tail avoid inflation now. The crisis and slow recovery should not be an excuse to revive failed Keynesian policies but instead to examine critically a denationalization of money. Per Selgin, Lastrapes, and White ("Has the Fed Been a Failure?" Cato Institute Working Paper No. 2 [December]),

Some proposed alternative arrangements might plausibly do better than the Fed as presently constituted. We conclude that the need for a systematic exploration of alternatives to the established monetary system is as pressing today as it was a century ago.

Hayek. 1939b. Profits, Interest, and Investment and Other Essays on the Theory of Industrial Fluctuations. Clifton, N.J.: Augustus M. Kelley. 1975.

Hayek. 2008. Prices and Production and Other Works: F. A. Hayek on Money, the Business Cycle, and the Gold Standard, ed. Joseph T. Salerno. Auburn, Ala.: Ludwig von Mises Institute.

Taylor, John B. 2008. "The Financial Crisis and the Policy Response: An Empirical Analysis of What Went Wrong."