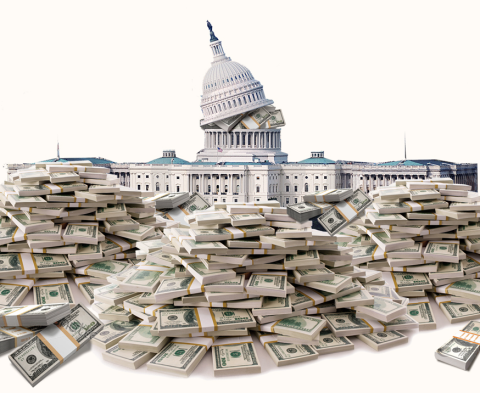 (Excerpt from THE GREAT DEFORMATION: The Corruption of Capitalism in America by David A. Stockman. Published by PublicAffairs.)

Fannie Mae is a classic crony capitalist progeny of the New Deal that began life in 1938, quite innocently, as still another ad hoc New Deal program to boost the depression-weakened housing market. It grew into something quite different: a monster that deeply deformed and corrupted the nation’s entire financial system seventy years later.

The policy aim of Fannie Mae was “forcing water to flow uphill” in the residential mortgage market so that low-rate thirty-year home mortgages became available to wage-earning households of modest means. Such mortgages did not then exist for a good reason: they were not economic. No prudent local bank or thrift would take the underwriting risk.

Fannie Mae would thus override the market’s veto by turning local banks and thrifts into government contractors or agents, rather than mortgage debt underwriters. Accordingly, they would be relieved of their aversion to the risk of default loss by means of a Washington-funded “secondary market.” The latter would purchase these commercially unappealing mortgage loans for cash, enabling local bankers to reloan this cash again and again in a government-supported rinse and repeat cycle.

Meanwhile, the default losses that the market refused to underwrite would be shifted to taxpayers, since Fannie Mae’s funding would implicitly depend on the public credit of the United States. The slowly recovering residential housing sector would thus receive the kind of booster shot much favored by the New Dealers.

What Fannie Mae also did, unfortunately, was to start the home mortgage market down a slippery slope. This included separating the loan origination process from the long-term servicing and ownership of the resulting mortgage, in an alleged financing “innovation” that would give rise to predatory mortgage-broker boiler rooms a few generations down the road.

Likewise, it opened the door to the funding of home loans in the global markets for U.S. sovereign debt, rather than out of the savings deposits of local bank customers. This became possible because Fannie Mae took on quasi-sovereign status, meaning that investors were funding the general credit of the United States, not the specific risk of local mortgage borrowers and separate residential markets.

There were several crucial upgrades in ensuing decades to the original New Deal scheme before it reached its stunning dénouement in Washington’s panicky $6 trillion nationalization and bailout in September 2008. Among these milestones were LBJ’s maneuver to put Fannie “off-budget” in 1968 in order to hide its exploding use of Uncle Sam’s credit card.

LBJ’s so-called privatization plan, in turn, paved the way for Fannie to morph into a hybrid entity called a GSE (government-sponsored enterprise) in which ownership was private but its debt issues were implicitly government guaranteed. Politicians and policy makers who inherited FDR’s “anything that works” mantle were pleased to describe the GSEs as creative “public/private partnerships.”

They were no such thing. The GSEs were actually dangerous and unstable freaks of economic nature, hiding behind the deceptive good-housekeeping seal afforded by their New Deal–sanctioned mission to support middle-class housing. This was especially the case after Fannie’s initial public offering and subsequent ability to tap the public capital markets for virtually limitless funds.

Another crucial step was Wall Street’s perfection of the mortgage securitization model. This “innovation” vastly improved Fannie’s ability to sweep up mortgages originated by local bankers on a massive wholesale basis, and then guarantee and package them for distribution into increasingly broad and liquid national and international capital markets. When this was combined with high speed computerized underwriting in the 1990s, disasters like Countrywide Financial became inevitable.

Not surprisingly, when Treasury Secretary Hank Paulson’s fabled bazooka failed and Washington had to nationalize the GSEs, foreign central banks and other state institutions owned more than $2 trillion of American home mortgages, including upward of $1 trillion domiciled at the People’s Printing Press of China.

In short, Fannie Mae’s journey started in 1938 with a Washington, D.C., filing cabinet containing a few thousand mortgage notes which had been gussied up and christened as the nation’s “secondary mortgage market.” Yet the progeny of this innocent filing cabinet ended up eighty years later scattered around the globe in the trust accounts of Norwegian fishing villages and as a trillion-dollar stash in the central bank vault of Red China.

In the interim, massive social costs and economic losses built up inside the housing marketplace and became ripe to explode. As detailed more fully in chapter 20, the whole GSE scheme functioned to underprice mortgages, undermine lending standards, over qualify home buyers, fuel greedy broker predation, and fund a speculative climate.

In the process, the principal assets of the American middle class, family residences, were turned into an ATM machine and became the object of frenzied buying, selling, and serial refinancing. Unfortunately, this ruinous journey was far more inexorable than it was merely accidental.

At each step along the way, powerful special interest groups—mortgage bankers, real estate developers, home builders, building material suppliers, Wall Street underwriters, law and title firms, appraisers, and brokers—drove policy toward their own benefit. These changes, elaborations, enlargements, and aggrandizements had a common purpose: namely, to enable the Fannie Mae (and Freddie Mac) mortgage-financing machine to harvest ever greater volumes, profits and fees.

Indeed, the Fannie Mae saga demonstrates that once crony capitalism captures an arm of the state, its potential for cancerous growth is truly perilous. More importantly, it underscores that the resulting carnage can be vastly disproportionate to the alleged social ill that justified the original policy intervention.

In this case, the housing market had essentially recovered before Fannie Mae opened its doors. After hitting bottom at 125,000 units per year in 1931–1933, the volume of new starts had nearly tripled by the late 1930s. By then, it was by no means evident that the nation’s remaining willing lenders and solvent borrowers were producing the wrong answer with respect to the number of housing starts. So fiddling with an arbitrary goal of higher housing starts, the New Dealers gave birth to what eventually became a crony capitalist monster, and that was all.