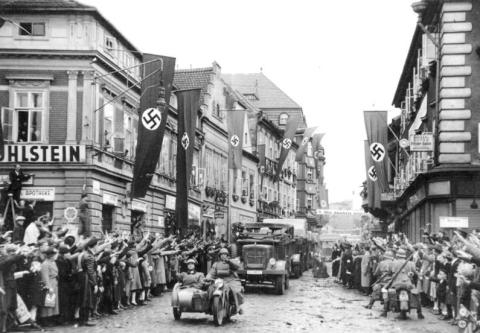 In 1944, Ludwig von Mises published one of his least-known masterworks: Omnipotent Government: The Rise of the Total State and Total War. Drawing on his prewar experience in Vienna, watching the rise of the national socialists in Germany (the Nazis), who would eventually take over his own homeland, he set out to draw parallels between the Russian and German experience with socialism.

It was common in those days, as it is in ours, to identify the Communists as leftist and the Nazis as rightists, as if they stood on opposite ends of the ideological spectrum. But Mises knew differently. They both sported the same ideological pedigree of socialism. "The German and Russian systems of socialism have in common the fact that the government has full control of the means of production. It decides what shall be produced and how. It allots to each individual a share of consumer's goods for his consumption."

The difference between the systems, wrote Mises, is that the German pattern "maintains private ownership of the means of production and keeps the appearance of ordinary prices, wages, and markets." But in fact the government directs production decisions, curbs entrepreneurship and the labor market, and determines wages and interest rates by central authority. "Market exchange," says Mises, "is only a sham."

Mises's account is confirmed by a remarkable book that appeared in 1939, published by Vanguard Press in New York City (and unfortunately out of print today). It is The Vampire Economy: Doing Business Under Fascism by Guenter Reimann, then a 35-year old German writer. Through contacts with German business owners, Reimann documented how the "monster machine" of the Nazis crushed the autonomy of the private sector through onerous regulations, harsh inspections, and the threat of confiscatory fines for petty offenses.

"Industrialists were visited by state auditors who had strict orders to examine the balance sheets and all bookkeeping entries of the company or individual businessman for the preceding two, three or more years until some error or false entry was found," explains Reimann. "The slightest formal mistake was punished with tremendous penalties. A fine of millions of marks was imposed for a single bookkeeping error."

Reimann quotes from a businessman's letter: "You have no idea how far state control goes and how much power the Nazi representatives have over our work. The worst of it is that they are so ignorant. These Nazi radicals think of nothing except ‘distributing the wealth.' Some businessmen have even started studying Marxist theories, so that they will have a better understanding of the present economic system.

"While state representatives are busily engaged in investigating and interfering, our agents and salesmen are handicapped because they never know whether or not a sale at a higher price will mean denunciation as a ‘profiteer' or ‘saboteur,' followed by a prison sentence. You cannot imagine how taxation has increased. Yet everyone is afraid to complain. Everywhere there is a growing undercurrent of bitterness. Everyone has his doubts about the system, unless he is very young, very stupid, or is bound to it by the privileges he enjoys.

"There are terrible times coming. If only I had succeeded in smuggling out $10,000 or even $5,000, I would leave Germany with my family. Business friends of mine are convinced that it will be the turn of the ‘white Jews' (which means us, Aryan businessmen) after the Jews have been expropriated. The difference between this and the Russian system is much less than you think, despite the fact that we are still independent businessmen."

As Mises says, "independent" only in a decorous sense. Under fascism, explains this businessman, the capitalist "must be servile to the representatives of the state" and "must not insist on rights, and must not behave as if his private property rights were still sacred." It's the businessman, characteristically independent, who is "most likely to get into trouble with the Gestapo for having grumbled incautiously."

"Of all businessmen, the small shopkeeper is the one most under control and most at the mercy of the party," recounts Reimann. "The party man, whose good will he must have, does not live in faraway Berlin; he lives right next door or right around the corner. This local Hitler gets a report every day on what is discussed in Herr Schultz's bakery and Herr Schmidt's butcher shop. He would regard these men as ‘enemies of the state' if they complained too much. That would mean, at the very least, the cutting of their quota of scarce and hence highly desirable goods, and it might mean the loss of their business licenses. Small shopkeepers and artisans are not to grumble."

"Officials, trained only to obey orders, have neither the desire, the equipment, nor the vision to modify rules to suit individual situations," Reimann explains. "The state bureaucrats, therefore, apply these laws rigidly and mechanically, without regard for the vital interests of essential parts of the national economy. Their only incentive to modify the letter of the law is in bribes from businessmen, who for their part use bribery as their only means of obtaining relief from a rigidity which they find crippling."

Says another businessman: "Each business move has become very complicated and is full of legal traps which the average businessman cannot determine because there are so many new decrees. All of us in business are constantly in fear of being penalized for the violation of some decree or law."

Business owners, explains another entrepreneur, cannot exist without a "collaborator," i.e., a "lawyer" with good contacts in the Nazi bureaucracy, one who "knows exactly how far you can circumvent the law." Nazi officials, explains Reimann, "obtain money for themselves by merely taking it from capitalists who have funds available with which to purchase influence and protection," paying for their protection "as did the helpless peasants of feudal days."

"It has gotten to the point where I cannot talk even in my own factory," laments a factory owner. "Accidentally, one of the workers overheard me grumbling about some new bureaucratic regulation and he immediately denounced me to the party and the Labor Front office."

Reports another factory owner: "The greater part of the week I don't see my factory at all. All this time I spend in visiting dozens of government commissions and offices in order to get raw materials I need. Then there are various tax problems to settle and I must have continual conferences and negotiations with the Price Commission. It sometimes seems as if I do nothing but that, and everywhere I go there are more leaders, party secretaries, and commissars to see."

In this totalitarian paradigm, a businessman, declares a Nazi decree, "practices his functions primarily as a representative of the State, only secondarily for his own sake." Complain, warns a Nazi directive, and "we shall take away the freedom still left you."

In 1933, six years before Reimann's book, Victor Klemperer, a Jewish academic in Dresden, made the following entry in his diary on February 21: "It is a disgrace that gets worse with every day that passes. And there's not a sound from anyone. Everyone's keeping his head down."

It is impossible to escape the parallels between Guenter Reimann's account of doing business under the Nazis and the "compassionate," "responsible," and regulated "capitalism" of today's U.S. economy today. At least the German government was frank enough to give the right name to its system of economic control.