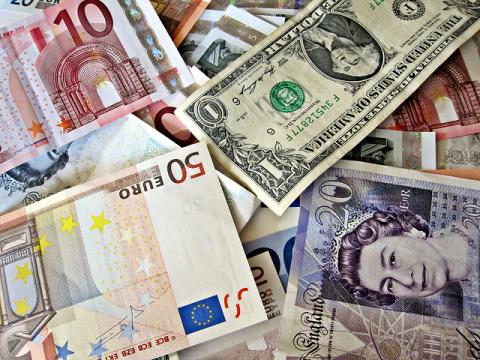 The attacks on physical cash from a phalanx of economists, central bankers, commercial banks, and politicians have not diminished in recent years. On the contrary, in the face of the worldwide increase in terror attacks, particularly in Europe, and ongoing pressure on public budgets, the cash ban issue is increasingly dragged into the spotlight.

In a highly-recommended study entitled “Cash, Freedom and Crime. Use and Impact of Cash in a World Going Digital,” Deutsche Bank Research demolishes numerous popular myths surrounding cash, inter alia in the context of crime and terrorism. Without cash there are no longer bank robberies at gun point, instead there are now electronic bank robberies. Fraud involving credit cards and ATM cards is massively increasing in Sweden, the country considered the pioneer of the cashless society. The argument that adopting a cashless payment system would facilitate the fight against terrorism doesn't hold water either:

As regards terrorism in Europe, an analysis of 40 jihadist attacks in the past 20 years shows that most funding came from delinquents’ own funds and 75% of the attacks cost in total less than USD 10,000 to carry out — sums that will hardly raise suspicions even if paid by card.

Moreover, many terrorists, particularly if they are prepared to risk their own death, won't be deterred by prohibitions, just as stricter gun laws have no impact on people who must use unregistered weapons for their crimes. Often, they are unable to get hold of a weapon by legal means anyway if they have a criminal record. Planned terror attacks are as a rule characterized by a meticulous and careful approach. At best a cash ban might make financing of terrorism more difficult (even that is doubtful), but at the price of subjecting the law-abiding peaceful population at large to even more intrusive surveillance.

Legislators have passed additional regulations in the past 12 months which at least restrict the use of cash; bans of high-denomination banknotes (e.g., the 500 euro note) and (lower) thresholds for legal cash payments. There are however also technological developments that are significantly reducing the transaction costs of cashless payments and are therefore making cash comparatively unattractive.

In Sweden, an app called “Swish”  introduced by the country's leading banks has revolutionized cashless payments. To this point, the app has been downloaded 5.5 million times. In the Scandinavian country only 2% of all payments are settled in cash these days.

Sweden's central bank expects that this percentage will decline by another three-quarters to 0.5% by the end of the decade. 900 of the 1,600 bank branch offices in the country no longer have any cash in store.

The academic debate continues unabated. A paper that has recently triggered intense debate is the IMF working paper “The Macroeconomics of De-Cashing,” which was published in March 2017.  Its author Alexei Kireyev examines the possible macroeconomic consequences of abolishing cash. His central conclusions are:

Regardless of a superficially balanced approach in large parts of the text, the article clearly evinces an underlying bias toward supporting the abolition of cash. Several arguments in the paper are fallacious and represent little more than intellectual kowtowing to the prevailing zeitgeist. Thus a cashless economy is supposedly going to improve “financial inclusiveness” — as every citizen and economic actor would be forced to open a bank account; it would reduce illegal immigration — as employment of illegal immigrants would become more difficult; and it would help protect the environment — because the production of paper or polymers for banknotes has a greater impact on the environment than electronic money.

Whether the given objective of fighting crime and black markets can be realized by banning cash remains a highly controversial issue. Thus, Professor Friedrich Schneider, one of the most renowned experts in the areas shadow economy and tax evasion, shows that a cash ban would reduce illicit employment be a mere 10% and organized crime by less than 5%.

The paper's conclusions ultimately read like a political manual for the abolition of cash by means of salami tactics. In other words, to prevent the population from getting alarmed, it is to be weaned off cash in tolerable doses through a piecemeal approach. Economic incentives for cashless payments are to be put in place, i.e., specifically, fees for cash payments are supposed to be introduced or raised. In our assessment, the most important point though concerns the notion that “de-cashing” would be “critical for the efficiency” of a negative interest rate policy.