The Myth of Voluntary Unions 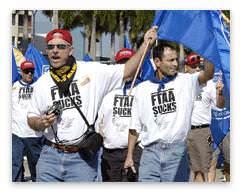 Imagine that I get together with my friends in Auburn (say, Lew Rockwell and Joseph Stromberg) and open up a coffee shop in called "The Austrian Café."  We offer a selection of strong, European coffee, assorted desserts, and occasional music (sing-alongs on Friday and Saturday evenings, in German and English). It turns out to be enormously profitable, so profitable that several competitors—including the left-wing nemesis Starbucks—show up in town with similar themes and products.

We respond to the competition by attempting to murder our competitors, assaulting them and their employees with knives, baseball bats, clubs and fists, vandalizing their cars and places of business, setting fire to their buildings, sabotaging their coffee by secretly pouring rat poison into it, shooting at them as they drive through town, throwing rocks at them, and even dynamiting their properties. The police, having been thoroughly indoctrinated in Austrianism, largely look the other way.

Would you consider our business practices to be noncoercive? Well, of course not; the above-mentioned activities are pure thuggery and criminality.

But labor unions have routinely engaged in these very practices in assaulting competing, nonunion labor (generally referred to as "scabs," "rats," and "strikebreakers"). Yet many people—even some libertarians—insist that unions are somehow inherently noncoercive and "voluntary" and should be considered part of the free market.

This is an easy trap to fall into if one thinks of unions only in an abstract sense, detached from any reality and history. In principle, unions could conceivably be just voluntary associations of workers seeking to improve their own economic wellbeing, just like everyone else, including the combinations of individuals who we label as   "corporations." This public school image of unionism (taught to Americans by unionized government employees) is of happy-faced workers marching merrily into the boss’s office singing "Solidarity Forever," with legal pads under their arms filled with bullet points listing their demands for better wages and working conditions. What could be wrong with that?

But a basic understanding of the elementary economics of unionism, and of the history of unionism, explains why violence against competitors has always been an inherent feature of unionism, even apart from the "violence" of state-imposed legislative privileges that unions enjoy. Historically, the main "weapon" that unions have employed to try to push wages above the levels that employees could get by bargaining for themselves on the free market without a union has been the strike. But in order for the strike to work, and for unions to have any significance at all, some form of coercion or violence must be used to keep competing workers out of the labor market. As explained by Morgan Reynolds, former chief economist at the U.S. Department of Labor, in his outstanding book, Power and Privilege: Labor Unions in America (p. 48):

A union’s problem is painfully obvious: organized strikers must shut down the enterprise, close the market to everyone else—uncooperative workers, union members, disenchanted former strikers, and employers—in order to force wages and working conditions above free-market rates. If too many individuals defy the strikers . . . then unionists often resort to force. Unionists ultimately cannot impose noncompetitive wage rates . . . unless they can prevent employers from hiring consenting adults on terms that are mutually satisfactory. Unions must actively interfere with freedom of trade in labor markets in order to deliver on their promises.

Thus, strikes—and unions in general—represent a conflict between unionized and non-unionized labor much more than between unions and management. Among the tactics that unions have historically used against non-union labor, notes Reynolds, are "mass picketing, insults, threats, throwing rocks and bottles, car chasing, abusive phone calls, physical assaults, property destruction, and even murder."

But it’s far worse than that. In 1983, the Industrial Research Unit of the at the of published a 540-page book on the history of union violence in entitled Union Violence: The Record and the Response by Courts, Legislatures, and the NLRB, by Professors Armand J. Thieblot, Jr. and Thomas R. Haggard. The book notes at the very beginning that employers have also resorted to violence in labor disputes, which they indeed have. But two wrongs do not make a right, and the theme of the book is that, for the reasons mentioned above, violence against "rats, scabs and strikebreakers" is an inherent feature of unionism and always has been. Surveying newspaper accounts and judicial records for a period of several decades, the authors note that such records are

Thieblot and Haggard explain why violence and coercion are integral to the existence of unions: they are used as an organizing tool; to engender fear and compliance with union demands; as a bargaining device; as an attention getter that they hope will generate pressure for a settlement in their favor; as an enforcement mechanism to keep strikers in line; as a warning to employers who might consider contracting with non-union companies; as a means of preventing non-union companies from working during strikes; and as a means of generating fear in general, just like any criminal gang would in order to intimidate any would-be competitors, whether it be teenaged drug gangs or the Mafia.

Judging from the listings, violence seems to be an inherent part of labor relations and the collective bargaining process, or at least its use is widely distributed. The 2,598 incidents in the data base involve 131 different unions.

Not every single union is involved in violence, but the vast majority have apparently been. They found six unions in their sample for which there was no record of violence: four government employee unions, a musicians’ union, and the "Brotherhood of Maintenance of Way Employees." The most violence-prone unions in their sample were the Teamsters, Mine Workers, Steelworkers, Auto Workers, State, County and Municipal Employees, Machinists, Food and Commercial Workers, and the National Education Association. The "overall purposes" of all this violence, the authors conclude, is "to attain union objectives through the blatant and often unpunished use of force and coercion" (p. 169).

It took decades of dwindling union membership (currently 8.2% of the private-sector labor force in the U.S. according to the U.S. Dept. of Labor) to convince union leaders to scale back the strike as their major "weapon" and resort to other tactics. Despite all the efforts at violence and intimidation, the fact remains that striking union members are harmed by lower incomes during strikes, and in many cases have lost their jobs to replacement workers. To these workers, strikes have created heavy financial burdens for little or no gain.  Consequently, some unions have now resorted to what they call "in-plant actions," a euphemism for sabotage.

Damaging the equipment in an oil refinery or slashing the tires of the trucks belonging to a trucking company, for example, is a way for unions to "send a message" to employers that they should give in to union demands, or else. Meanwhile, no unionized employees, including the ones engaged in the acts of sabotage, lose a day’s work.

"Corporate campaigning" has also become a popular tactic. This is essentially a campaign of defamation against the company and its managers that is intended to apply pressure to sign a union agreement without involving the employees in a representation election ("pushbutton unionism"), or if the company is already unionized, to pressure management in to giving in to the union’s demands. Violence and property destruction is sometimes involved in such "campaigns," but they are mostly public smear campaigns aimed at imposing costs on the company by persuading its customers or suppliers to stay away and cease doing business with it. Sending hundreds, or thousands, of false complaints to regulators, and press releases based on the false complaints, are common tactics.

One can always point to isolated examples of unions that have avoided violence and coercion and have worked cooperatively with management for their common good. The airline pilot’s union, for example, has lobbied the government to permit commercial airline pilots to carry firearms in order to protect airline property and avoid another 9/11. But that still does not negate the fact that, because unions are essentially "labor cartels," as Morgan Reynolds has described them, their chief enforcement mechanism for the cartel has historically been violence and coercion. Unions often refer to the collective bargaining process as a "war." War, with all its economic destructiveness, is a much more apt metaphor for unionism than "voluntary association" is.

In an ideal world law enforcement would not allow such lawlessness, but we have never lived in an ideal world and never will. Assessing the role of unions in society, as with any other economic phenomena, requires a strong dose of economic theory combined with historical reality. In a labor force of some 130 million, private sector unions in the claim less than 10 million as members. The overwhelming majority of American workers have decided that individual or group bargaining on the free market, without a union, is in their own best interest. If this decline in union membership continues, falling from its peak of around 30 percent of the private-sector labor force in the 1950s, private-sector unions in may well go the way of the Dodo.