GET NEWS AND ARTICLES IN YOUR INBOXPrint
A
A
Home | Mises Library | Murray N. Rothbard: In Memoriam 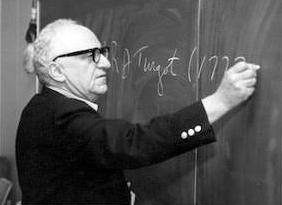 Murray Rothbard's scholarship spanned an enormous range, including philosophy, methodology, economic theory, the history of economic and political thought, economic history, economic policy, law, and contemporary politics. I was well along in my career as an economist specializing in the economic history of the United States when I began to read his work. Once started, I never stopped.

The first thing I can recall reading, soon after its publication in 1978, was the revised edition of For a New Liberty. Having already absorbed a good deal of the work of Milton Friedman, Friedrich Hayek, and other free-market economists, I found much of this manifesto congenial, although I balked at the possibility of dispensing with government even for the provision of national defense and courts of justice. I spent many hours over lunches with my friend Andy Rutten chewing on Murray's ideas about how and why anarcho-capitalism would work.

In the following years I read a great deal of Murray's work, although I am sure that even now I've only scratched the surface of his oeuvre. Among the works that I have found especially valuable in my own research are his two chapters, "War Collectivism in World War I" and "Herbert Hoover and the Myth of Laissez-Faire," in A New History of Leviathan, published in 1972. My own book on the American leviathan contains several references to Murray's essays, but probably does not reveal my full debt to those seminal chapters.

My closest encounter with Rothbard the economic historian, however, came off the record. Early in 1985 I submitted to the Pacific Research Institute a manuscript that, after several more revisions and some additions, was eventually published as Crisis and Leviathan by Oxford University Press in 1987. Pacific asked several eminent scholars, including Murray, to review my manuscript. Murray's review went far beyond what one might have expected, taking the form of a letter to Pacific's Greg Christainsen, dated May 27,1985. It runs 26 single-spaced pages, probably over 12,000 words. Over the years, I have seen a lot of reports by referees and reviewers, but never anything that came close to this remarkable epistle.

The letter began with two pages of praise for my manuscript. Murray liked my general approach. "Perhaps without realizing," he wrote, "Professor Higgs approaches history from the Misesian praxeological viewpoint, knowing and applying the truths and laws of economics, but also realizing that ideological and other factors are also of crucial importance." He appreciated what he described as my "critiques of Chicagoite cliometrics and public choice history — both of which try to sum up all of history with a few equations, or with a one-dimensional simplistic approach."

Murray lauded my work for not being value-free. "We have suffered for too long," he wrote, "from a dichotomy in which essayists and pamphleteers, who are unscholarly, are hard-hitting and value-laden whereas scholars are evasive, garbled writers who hide behind a careful cloak of value-freedom." He delighted that I was "calling a spade a spade and not a 'triangular implement for digging.'"

He declared that "Higgs's values are my values," applauding my realization that war and militarism are "the major cause and embodiment of intervention" in the market and the suppression of liberty and free enterprise. My hostility to conscription and my natural-rights objection to it — as opposed to a neoclassical efficiency objection — pleased him mightily. My comments on the gold standard garnered his approval, too.

Had I stopped reading after the first two pages, I might have considered myself a certified damned fine scholar. Any such temptation, however, was decisively punctured by the next 24 pages. These contained a minutely detailed yet broad-ranging critique, along with scores of suggestions for what needed to be added to my text and what additional books, articles, and dissertations I needed to read to correct my misapprehensions and flesh out my knowledge.

I can still recall the deflated feeling I had after finishing the letter. I knew that I did not have sufficient life expectancy to accomplish what Murray had indicated needed to be done. Sad to say, I couldn't read that much in a decade, even if I did nothing else, much less incorporate all of it into a coherent book. Never before had I been shown my inadequacies as a scholar in such a well-documented way — after all, even the pathetic manuscript Murray was flogging had taken me five years to draft and rested to some extent on twenty years of study and research.

We are not all destined for greatness. I made a number of revisions of my text and my footnotes along the lines suggested in Murray's letter. Needless to say, I was not able to follow up on the great majority of his suggestions, and I have no doubt that my book was the worse for that inability. All I can say in my own defense is that the book, such as it is, did get finished and published in my lifetime. And my luck held. When Murray reviewed the book for Liberty magazine in 1987, he praised it extravagantly, breathing not a word about the shortcomings he had spent 24 pages detailing in a private communication written mainly for my benefit.

Murray's letter included a number of magnificent epigrams. To readers who had the wonderful opportunity to listen to Murray's lectures on economic history, as I did at several of the Mises Institute's summer programs, these will have a familiar ring. Here are a few of them.

On the nature of the state:

"The State has its own agenda, that is, … all States everywhere are run by a ruling class, the people running the State, and one of their interests is to extend as well as maintain the power and wealth arising from that rule."

On intellectuals as servants of power:

"Since … the existence of any State regime rests on public opinion, it becomes important for the State to engineer that opinion with the aid of the professional opinion-moulding group: the intellectuals. This cozy coalition benefits the State rulers — kings, nobles, political parties, whatever — because the public is persuaded to obey the king or State; the intellectuals benefit from a share in the tax revenue, plus their 'market' being guaranteed by the government."

On hope for the dissolution of statist regimes:

"The situation is not irreversible…. [G]overnment intervention is beset by 'inner contradictions' … breakdowns are inevitable and are coming faster in response to the stimulus of intervention — here the rational expectations people have some good points. Progressive and synergistic breakdowns in domestic and foreign intervention might lead to crises and fairly rapid and even sudden reversions to freedom. Note, for example, the remarkable, even if gradual, shift from Stalinism to free markets in Yugoslavia, the developing shift out of Maoism in China, and at least the public sentiments if not the reality underlying conservative regimes in the U.S. and England, growth in free-market and libertarian views in Western Europe, etc. And remember that the public choicers are wrong that revolutions can never occur."

These characteristic sentiments exemplify Murray's unflagging optimism. More than once he observed that my prognosis was "too pessimistic." Well, temperament is tough to slough off. I doubt that I shall ever acquire Murray's optimism, which I believe goes far to explain how he was able to keep slugging away until the day he died, always convinced that eventually those who favor a free society will win the great struggle.

It is not likely that we shall ever have another scholar of Murray's breadth. In his letter he referred to well over a hundred sources, many by exact author, title, publication date and publisher, even though he apologized for "not having access to the bulk of my books here in Las Vegas, nor to any decent library, so I will have to wing the citations from time to time." The references include many obscure or exotic books and articles (e.g., Etienne de La Boetie, Discourse on Voluntary Servitude; Alfred De Grazia, ed., The Velikovsky Affair; Colin Simpson, The Lusitania Affair; Eugene N. Golob, The Isms; and R. Palme Dutt, Fascism and Social Revolution).

Murray also had extensive knowledge of the religious history of the United States, upon which he expounded with great gusto in his historical lectures, in which the diabolical doings of the postmillennial pietists figured prominently. Many of us may remember Murray most fondly for his fabulous sense of humor. He was a truly entertaining conversationalist and lecturer, and his letters contained priceless witticisms and hilarious descriptions. In the letter I've been quoting, he told the following

"lovely — and true! — story about one of the great social philosophers of our century, W.C. Fields. Fields was asked, among other celebrities, by the Saturday Evening Post, during World War II, to write a plan about how to end the war. W.C. sat down, quite seriously, and proposed his plan, which was to get the leaders of the warring nations together, bring them to the Hollywood Bowl, and 'let them fight it out with sackfuls of dung.' Needless to say, the SEP did not publish the article."

I was honored to know Murray Rothbard and privileged to work with him in a number of conferences and programs organized by the Mises Institute. I hold him to have been one of our century's great intellectual figures, whose neglect by mainstream academicians is inexcusable. He stimulated my thinking and enlarged my knowledge. My personal association with him brought me much pleasure. I do not expect to encounter another like him, and his passing grieves me greatly.