GET NEWS AND ARTICLES IN YOUR INBOXPrint
A
A
Home | Mises Library | Municipalized Trash: It's Uncivilized 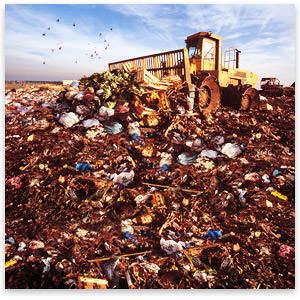 Driving into work today, I saw garbage bins overflowing and city dumpsters spilling out with trash. It stinks. It's disgusting. It's uncivilized. It's probably dangerous to some extent.

It's a holiday, so of course the government workers charged with picking up this nasty refuse can't work, even though construction workers in private firms are busy bees taking advantage of the extra time.

It's true with house trash too: pickup is once per week — on schedule — and there is nothing you can do to make it more frequent. It's part of the master plan, don't you know, and if you make more trash than the once-per-week pickup can contain, that is your problem, not the city's.

The very fear that people have about private trash collection — that it will pile up and no one will do anything about it — turns out to be a regular feature of government trash collection. But we look the other way. Why?

Before getting to this, let us first establish that garbage is a serious issue. Libertarians were once chided by William F. Buckley, his head full of schemes for threatening populations with nuclear annihilation, for bothering with such petty concerns as trash collection.

"It is only because of the conservatives' disposition to sacrifice in order to withstand the enemy," wrote Buckley in 1961, "that [libertarians] are able to enjoy their monasticism, and pursue their busy little seminars on whether or not to demunicipalize the garbage collectors."

Ah yes, little seminars. Seminars about such things as the avoiding the plague. Humanity has some experience with the results of failing to dispose of trash properly, and that experience is deadly. Plagues swept the ancient world every 50 years or so, spread mainly through a lack of good sanitation. The Black Death in Europe might have been avoided with better sanitation and a decent system for disposing of trash, rather than letting it pile up on the streets.

History's fight with the plague in the developed world came to an end at the time of the rise of capitalism in the late middle ages, and no surprise there. With the accumulation of capital came innovation in trash disposal, since living in sanitary conditions and staying alive turns out to be something of a priority for people. This is why the largest advances in garbage collection came about during the Industrial Revolution.

And yet here we are in 2009, with trash piled up on the streets and stinking to high heaven, bags full of raw animal parts (chickens, pigs, cows, fish), baby diapers stuffed with waste, rotting eggs mixed with sour cream dip from game-day parties, piles that are right now being scavenged by roaches and rats. This is in a town that prides itself on its tidiness.

And we put up with this for the same reason that we put up with lost mail, potholes in roads, dilapidated schools, depreciated money, and a clogged court system: because these services are monopolized by government.

Now you can make all the public-goods arguments you want to about roads and courts, but trash disposal is not rocket science and could be easily handled by the market. Everyone wants trash removed, and the sooner the better.

That means that there is a market demand for the service. There is money to be made. The only way to keep something like this at bay is to make it illegal.

If the market were in charge, pickup would surely be more than once per week. We wouldn't have to drag our trash bins out to the curb. In fact, we would be faced with several or many possible options for trash pickup.

If we made more trash than we "should," we wouldn't get angry notes from the city government. The private pickup companies would be thrilled. We might be paying by frequency of pickup or perhaps by the pound. That would be for the market to decide.

In fact, trash pickup services might actually be characterized by — perish the thought — innovation, just as they were in the early part of the 20th century, when trash collection was mostly private. Our houses might be directly connected to underground trash-transmission services that would whisk it all away in an instant. Our kitchens might have highly effective trash chutes that would zap away trash as we make it.

But because of this ghastly tradition of municipalizing trash pickup (or we might call it Sovietizing), the entire industry is stuck in the past, utterly impervious to improvement and modernization.

We get our news through fiber optics, walk around with tiny wireless phones that can instantly connect with anyone anywhere, and shop digitally with any vendor in the world. But when it comes to trash, we are still relying on once-per-week, strictly scheduled pickups by tax-funded workers driving monstrous, old-model trucks.

In my town, even the trashcans are paid for and owned by the government, as if the private sector has yet to figure out on its own initiative how to make a tub for holding things.

So why does this system persist? I asked a few people about this, and the answer usually came down to some system of graft. Powerful people make the trucks, manage the landfills, and dole out the contracts. Perhaps so, but why do we put up with it?

It seems like a preposterously unobjectionable plan: open this system to private ownership and competition, and thereby innovation.

I don't just mean contracting out. I mean abolishing city trash pickup and letting private enterprise completely take over. There is just no way that the existing muck would persist, for it offends every aesthetic sensibility and it may pose a ghastly health risk.

As for the old conservative claim that libertarians are insufficiently worried about the Soviet threat and too much about garbage collection, note that the Soviet Union is gone and the garbage problem is still with us.