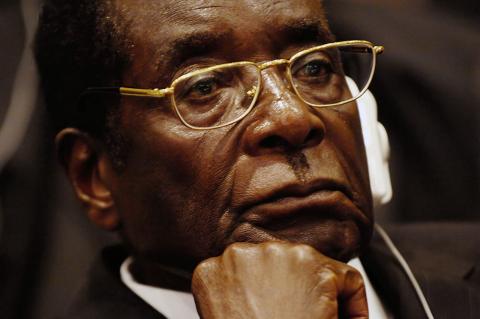 It is one of the most common tragedies of human history: a region populated by relatively defenseless farmers is set upon by a gang of well-armed bandits, who force the farmers off their land and divide the land and spoils among themselves. In 1893, the tragedy had come to Zimbabwe, and the gang of well-armed bandits were British settlers led by mining magnate Cecil Rhodes.

Rhodes was sponsored in his aggression by the British government, operating under an 1889 royal charter to settle this fertile region of southern Africa. Having suppressed the local Ndebele people, the colonists entrenched the new status quo by (hypocritically) enforcing property rights in their ill-gotten gains.

Secure in their conquest, Rhodes and his group of miners and farmers soon made "Rhodesia" into a prosperous country. The influx of foreign capital, combined with European technical skills, translated into rising standards of living in Rhodesia, even for many of those who had been robbed of their lands in 1893.

Rhodesia became independent from Britain in 1965 and, after 15 years of turmoil and violence, conceded to international demands that the rule of the white minority give way to mass democracy. In 1980, with British and American officials looking on approvingly, Robert Mugabe was elected prime minister. Unfortunately for the renamed Zimbabwe, the Mugabe regime was not to be characterized by a respect for private property rights. In some ways, in fact, Mugabe's rule would come to resemble the banditry of Cecil Rhodes.

Mugabe began efforts at land reform, through which white farmers were to be required to transfer their land to black Zimbabweans. This movement picked up steam in 1997, though not without opposition. In a climactic 2000 referendum, voters rejected the forcible confiscation of white-owned farms.

Mugabe responded by cruelly suppressing his opposition, using property destruction, rape, and murder to eliminate any possibility of a change in government. His plans for land reform proceeded, and 95 percent of the white-owned farms were targeted for redistribution. A deadline of August 10, 2002, was set for 2,900 farmers to leave their lands. Hundreds of arrests followed the passing of the deadline, as some farmers refused to comply.

Mugabe has defended his actions as necessary to eliminate the remaining inequities of white colonial rule. If Mugabe’s land reforms were truly an attempt to restore stolen property to the heirs of the rightful owners, we might applaud the principle of redistribution, if not the methods, as consistent with a staunch defense of private property. Land redistribution would be particularly welcome in Eastern Europe, where property stolen by the Communists has yet to be returned to the families from which it was seized.

Yet this is not what Mugabe's land reforms have been about. Certainly Mugabe has shown no concern for the minority Ndebele whose ancestors Rhodes defeated. In 1983, Mugabe used his North Korean-trained troops to brutally massacre thousands of Ndebele civilians. Even if the rightful heirs could be identified, which is doubtful, Mugabe’s government has been much more concerned with garnering political support, extracting revenues from the wealthy, rewarding friends, and buying off enemies.

In just a few years, the government of Zimbabwe has managed to destroy its agricultural markets, and to impoverish and starve its population, in the guise of defending historical property rights. A principled advocacy of property rights allows no excuse for the government’s actions. Murray Rothbard’s comments in Power and Market are particularly relevant here:

"One charge often made against the market is that 'all' property can be traced back to coercive depredations or State privilege, and therefore there is no need to respect current property rights. Waiving the question of the accuracy of the historical contention, we may state that historical tracings generally make little difference. Suppose, for example, that Jones steals money from Smith or that he acquires the money through State expropriation and subsidy. And suppose that there is no redress: Smith and his heirs die, and the money continues in Jones’ family. In that case, the disappearance of Smith and his heirs means the dissolution of claims from the original titleholders at that point, on the 'homestead' principle of property right from possession of unowned property. The money therefore accrues to the Jones family as their legitimate and absolute property."1

Mugabe's government does not appear to be making a good-faith effort to find rightful heirs. According to the Washington Times, "at least 190 senior politicians, businessmen and members of the armed forces close to Mr. Mugabe have been allocated farms." In August, President Mugabe’s wife, Grace, showed up at a particularly choice 3,000-acre farm with some of her husband’s troops. "I'm taking over this farm," she announced.

A few days later the 78-year-old owner was arrested. The Times report indicated that Mrs. Mugabe "intends to settle her relatives on the farm." The black farm workers who lived on the property were abruptly dismissed. In addition to Mugabe’s wife, two of his sisters, his brother-in-law, and his wife's nephew have also received farms.

Overall, around 70 percent of the white-owned farms have been turned over, not to poor landless blacks, but to Mugabe’s friends and relatives. The land grab is certainly not about reparations. And when Mugabe straight-facedly added another far-fetched rationale--sustainable development--at a recent U.N. conference, many Zimbabweans could only bitterly laugh.

The consequences have been dramatic and deadly. At the beginning of Mugabe's rule, Zimbabwe was a net exporter of grain. During the land redistribution, members of Mugabe’s ZANU-PF party have burned more than 10 million acres of crops and prevented many more acres from being farmed. Combined with a drought, government policy has produced terrible food shortages and wide-ranging crisis. At least 300,000 black farm workers (possibly as many as 1 million) have been thrown out of their homes. Most of the 12.5 million people in the country are unemployed, desperately poor, and now face starvation. Per capita income is now only $380 a year, barely over half the level of five years ago.

Mugabe's government, meanwhile, seems more concerned with maintaining a revenue stream. While the government has raised some funds by reselling confiscated farms to wealthy Zimbabweans, it has also resorted to inflation. By August, the inflation rate had reached an annual rate of 123 percent, and some predict that it will become a true hyperinflation by the end of the year. Zimbabwe appears well on its way to becoming another vivid demonstration of statism-induced disaster.

Journalist Mercedes Sayagues, who was expelled from Zimbabwe for her opposition to Mugabe's regime, contended that the crisis ultimately "is not about land redistribution." The land grab and the associated violence have everything to do with suppressing citizens who had publicly repudiated Mugabe’s policies in the 2000 referendum and who had endangered his rule. As Sayagues wrote,

"It is about keeping power in the hands of Zanu PF at the cost of destroying a country. It’s about a regime that creates and unleashes an armed militia of thugs to terrorise the countryside and cities to deliver the vote, to punish opponents, and to maintain its grip on the country. Were it not for the armed militia, for its organised, widespread torture and gang rape accomplished with police complicity, Mugabe would be out, and he knows it."2

In Zimbabwe, reparations are a transparent cover for one of the most monstrous governmental crimes of the last 10 years. Mugabe's land reforms have amounted to nothing more than a power grab by his government, which is starving a country that once was one of Africa's shining stars.