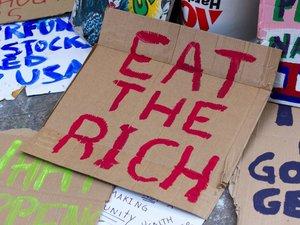 Over time, the claim that there is increasing income inequality globally has looked increasingly like a fairy tale. The assertions of inequality consist of the popular notion that the spread of capitalism leads to an immense increase in income inequality. The differences between rich and poor, we are told, are rising so fast that the situation is no longer sustainable. The narrative further asserts that there is an intrinsic tendency in capitalism toward inequality. This story is so often repeated that nobody questions it.

Is this picture accurate? The “naked” data seems to agree with the Marxist version of the market process, in which a small number of capitalists get richer as the people overall become more impoverished over time. Indeed, it seems that inequality since the Industrial Revolution has exploded. We can see how global inequality exploded since 1820 in both commonly-used indicators of inequality: Gini and Theil indices (figure 1).

A closer look at the available data, however, suggests something else.

First, we notice that the world’s income inequality has been decreasing since 1980. This decrease is mainly because of the introduction of market reforms in China that caused huge increases in productivity and remarkable high rates of growth that get out of poverty millions of people. In other words, 1.3 billion people are converging toward the world’s average income.

Nonetheless the differences between the richer and poorer increased substantially between 1850 and 1980. So the question remains unanswered: is capitalism the cause?

In the early nineteenth century, the Gini coefficient was 43 while in the early twenty-first century was near 70 (the number changes between 65 and 70 depending the on source of the data).

But are these numbers comparable? For this task we have to separate the components of the Gini coefficient into income differences within borders, and differences across borders.

This is clearly an indicator that inequality does not come from capitalism, but comes from the spread of industrialism and market institutions to different places at a different pace. If half of the world embraces markets and the other half doesn’t, it is clear that the development of the first group makes the world more unequal, but this fact doesn’t tell us anything about the inequality in the areas adopting market institutions. Indeed, the available data supports precisely this hypothesis: inequality across countries has risen from 15 Gini points to 60–63 Gini points, while within-border inequality has fallen from 28 points to 7–11 points (figure 2 and 3):

In both Gini and Theil indicators, the trend shows that cross-border inequality rises while the within-border inequality diminishes until 1980. The last observation changes the trend, as we pointed out, partly because of the recent incorporation of China and its labor force into the international economy.

Inequality is Unavoidable in Poor Societies

We can use another approach to the inequality measurement if we take subsistence levels into account. In preindustrial societies, the average income was very close to the subsistence level, but as populations move away from subsistence living, the Gini index value may increase if low-level income growth does not match growth at the high level.

In other words, the higher the top income goes, the greater the inequality. The income level of subsistence is set at $300:

Branko Milanovic takes this a step further. From here we can compare the “maximum feasible inequality” with the measurement of this equality and we obtain what is called the “extraction ratio.”

“Extraction ratio” is a vague term, and gives the impression that wealth is extracted instead of created, but the logic behind the metric is solid: given the maximum amount of inequality possible, how far is this maximum point from the actual measurement of it?

In the second case, we see that preindustrial societies are equal because of their low income. Disparity of incomes can only be achievable in rich societies. Once we seriously consider subsistence levels, we find that inequality slightly decreases in the last 200 years measured by the Gini index, or strongly decreases when measured with the Theil index.

The claim that markets are the cause of increasing an “unsustainable” inequality is now less convincing than ever.