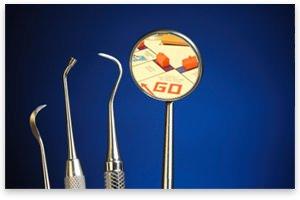 Where the government directly fosters monopoly prices we are faced with instances of license monopoly. The factor of production by the restriction of the use of which the monopoly price is brought about is the license which the laws make a requisite for supplying the consumers. Such licenses may be granted in different ways.… Licenses are granted to only select applicants. Competition is restricted. However, monopoly prices can emerge only if the licenses act in concert and the configuration of demand is propitious.

According to a recent article in Governing, many states are considering proposals to expand the limits of medical licensing and allow the emergence of "mid-level dental providers." These dental providers would play a role similar to nurse practitioners and physician assistants by providing routine dental procedures while under the guidance of a fully trained and licensed dentist. States such as New Mexico, Oregon, and Washington are looking into this reform in order to increase the supply of dental practitioners in rural areas. The American Dental Association, which represents 156,000 members, has since come out against this proposed measure.

To get a good idea of how state occupational licensing works, consider the following example. Imagine Bill runs a lemonade stand in the middle of a bustling city. Instead of facing competition from other street vendors and surrounding eateries and grocery stores, Bill had the foresight to lobby the local city council to outlaw all sellers of lemonade who don't at first obtain a license from the city. Due to his influence and close ties to select city council members, Bill fast tracked through the application process and was able to secure a license to sell lemonade before anyone else. Little competition stands in his way now. Bill is then able to keep his sale price above the established level of a real free market and reap profits as consumers are still willing to take the extra hit on their wallet for his delicious lemonade. Profits are up, times are good, and Mrs. Bill is happy. But now the city council is beginning to change its tune on lemonade licensing and is considering an increase in licensing allotments. The free ride is coming to an end, so Bill, worried the good life will soon be over, launches a countering lobbying effort on the basis that product quality will decrease if more licenses are given out.

Now apply this simple example en masse to the American Dental Association, which, like Bill the lemonade salesman, is lobbying hard against expansions in licensing by decrying over a potential decline in public safety.

For anyone familiar with the workings of an uninhibited market, government licensing schemes reek of legislative cronyism. In a true free market, consumer demand is fulfilled by entrepreneurs whenever supply and demand are met at the margin and artificial barriers of entry aren't legislatively established. Where demand and a willingness on the part of consumers to pay necessary costs exists, investment with capital and personnel are devoted toward those industries. In that sense, there should be no predicament over a lack of dental care in rural areas as an open market would ensure that such a service is provided; albeit likely at a higher price than that of prevailing areas with greater access to care.

But like much of the medical industry in the United States, access to care is stifled due precisely to the same type of solution being floated — that is, occupational licensing. As Mises showed, such licensing must lead to a decrease in supply, monopolistic conditions, and thus a lessening of competition.

Looking back at the mid-19th century before the advent of medical licensing, we see that the United States had one of the highest per capita numbers of practicing doctors in the world. As Ronald Hamowy shows, medical schools were numerous and cost of attendance was inexpensive.

Many physicians at this time practiced homeopathy; a sort of natural, laissez-faire approach to healing where the body was to reduce its exposure to negative environmental conditions such as stress and maintain a healthy diet. Those who practiced what was known as mainstream medicine sought to negate this competition by lobbying for medical occupational licensing via the states. This included joining forces with the American Medical Association to campaign for a broad enactment of licensing. By cooperating with the Carnegie Foundation and Abraham Flexner, a virtual nobody in the medical profession whose brother was the director of the Rockefeller Institute for Medical Research, the campaign met success upon the release of the infamous Flexner Report. In Making Economic Sense, Murray Rothbard writes on the Flexner Report and its disastrous effects:

Flexner's report was virtually written in advance by high officials of the American Medical Association, and its advice was quickly taken by every state in the Union.

The result: every medical school and hospital was subjected to licensing by the state, which would turn the power to appoint licensing boards over to the state AMA. The state was supposed to, and did, put out of business all medical schools that were proprietary and profit-making, that admitted blacks and women, and that did not specialize in orthodox, "allopathic" medicine: particularly homeopaths, who were then a substantial part of the medical profession, and a respectable alternative to orthodox allopathy.

Thus through the Flexner Report, the AMA was able to use government to cartelize the medical profession: to push the supply curve drastically to the left (literally half the medical schools in the country were put out of business by post-Flexner state governments), and thereby to raise medical and hospital prices and doctors' incomes.

And so began the downward trend in America's free market in medicine. With fewer medical schools — and thus fewer doctors — wages can be kept higher than would exist in a market dominated by free enterprise and the unobstructed entry into practice. Consumers, who ordinarily determine the success of producers, have lost out as they face higher costs on top of being deemed too ignorant to choose an adequate doctor without the aid of the state. Rent seeking becomes ingrained in an industry that must devote increasing amounts of financial resources to appease public officials.

The American Dental Association's opposition to expanded licensing has more to do with preserving the status quo than looking out for consumer safety. If freedom of entry were maintained in the dental industry, there is little doubt that mid-level dental practitioners, or some cost-efficient form of such, would have emerged as a viable occupation by now.

It must be stressed, however, that the advent of an increase in licensing for a type of mid-level dentist is by no means a comprehensive solution for the problems that plague the industry. Previous governmental intervention was the cause of a shortage in dentists and an increase in the price of dental care. Further micromanagement of an already overly managed problem will only bring about more unintended consequences. Such is the nature of the state: intervention begets intervention, and we forge ahead on the path to socialism. As Mises wrote,

All varieties of [government] interference with the market phenomena not only fail to achieve the ends aimed at by their authors and supporters, but bring about a state of affairs which — from the point of view of the authors' and advocates' valuations — is less desirable than the previous state of affairs which they were designed to alter. If one wants to correct their manifest unsuitableness and preposterousness by supplementing the first acts of intervention with more and more of such acts, one must go farther and farther until the market economy has been entirely destroyed and socialism has been substituted for it.