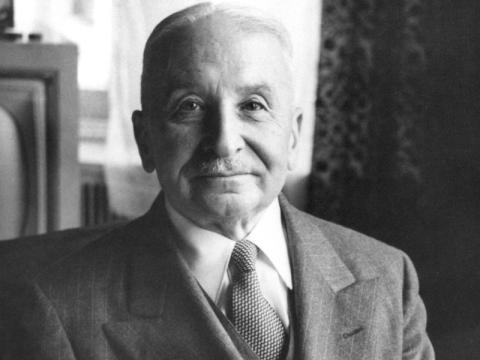 While Beethoven is widely hailed for his symphonic efforts, the writings and career of his Germanic kinsman, Ludwig von Mises (1881-1973), have never received similar exposure and status–despite the latter’s groundbreaking achievements in economic science. While the names of Marx, Keynes, Samuelson, Friedman, and even Hayek are generally known within enlightened circles, von Mises is not, although it can be argued that his contributions to economic thought alone have surpassed the combined works of all those mentioned above.

Why has such a seminal thinker been largely ignored even within the academic community? The simplest answer to such a glaring oversight is politics. While most of the intelligentsia embraced and promoted the various forms of statism that have dominated this century, von Mises remained a determined and consistent opponent of them. Whether it was inflationism and central banking, the totalitarian attempts to plan economic and social life, or the interventionist and welfare states of the Western democracies, von Mises demonstrated that most stemmed from faulty economic reasoning.

Taking such a position did not come without personal and professional costs. Von Mises never received an academic post worthy of his achievements, nor a prestigious publishing contract, nor the type of awards and honors given to far lesser lights. Despite the lack of notoriety, even within academia, the venerable Austrian continued to expose the economic fallacies and errors of the day.

Von Mises’s own personal fortitude and commitment to sound doctrine has been movingly described by one of his students, and a brilliant scholar sin his own right, the late Murray N. Rothbard: "Never would Mises compromise his principles, never would he bow the knee to a quest for respectability or social or political favor." As a scholar, as an economist, and as a person, Ludwig von Mises was a joy and an inspiration, an exemplar for us all.

It is therefore not surprising, although still a blight on academia, that von Mises was never seriously considered for a Nobel Prize. The closest he got to such recognition was when, a year after his death, his student F.A. Hayek received the award for his work in elaborating on von Mises's trade-cycle theory. Why the recognition of the man who followed in von Mises’s path, but not the man who led the way? Perhaps it was that von Mises was even more relentless and unyielding in his opposition to the conventional socialist thinking of his times.

Although von Mises was generally ignored throughout his own time, it does not necessarily mean that future generations should be bereft of his many fruitful insights. In fact, 1999 marks 50 years since his magnum opus, Human Action, was first published. While the treatise is a thorough critique and refutation of the many collectivistisms of the 20th century, it is also a blueprint of the reconstruction of economic science and thus social and economic life based rational and humane principles.

One would hope that as the failure of social democracy becomes more apparent, enlightened minds will turn away from the failed policies of the past and to those of the much-neglected Austrian giant so that by the end of the next century, the name Ludwig von Mises will be at least as familiar in the files of economics as Beethoven’s is in music.