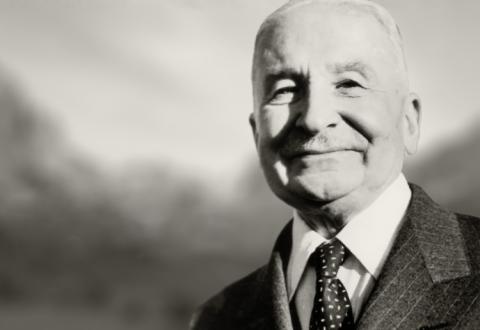 [Editor's Note: Contrary to some attempts to portray Ludwig von Mises as a theorist who rejected radical solutions, we find in his works that Mises supported radical decentralization and widespread secession. Hans-Hermann Hoppe discusses Mises's views below.]

"A nation, therefore, has no right to say to a province: You belong to me, I want to take you. A province consists of its inhabitants. If anybody has a right to be heard in this case it is these inhabitants. Boundary disputes should be settled by plebiscite." (Omnipotent Government, p. 90)

"No people and no part of a people shall be held against its will in a political association that it does not want." (Nation, State, and Economy, p. 34)

"Liberalism knows no conquests, no annexations; just as it is indifferent towards the state itself, so the problem of the size of the state is unimportant to it. It forces no one against his will into the structure of the state. Whoever wants to emigrate is not held back. When a part of the people of the state wants to drop out of the union, liberalism does not hinder it from doing so. Colonies that want to become independent need only do so. The nation as an organic entity can be neither increased nor reduced by changes in states; the world as a whole can neither win nor lose from them." (Nation, State, and Economy, pp. 39–40)

"The size of a state's territory therefore does not matter." (Nation, State, and Economy, p. 82)

"The right of self-determination in regard to the question of membership in a state thus means: whenever the inhabitants of a particular territory, whether it be a single village, a whole district, or a series of adjacent districts, make it known, by a freely conducted plebiscite, that they no longer wish to remain united to the state to which they belong at the time, but wish either to form an independent state or to attach themselves to some other state, their wishes are to be respected and complied with. This is the only feasible and effective way of preventing revolutions and civil and international wars." (Liberalism, p. 109)

"If it were in any way possible to grant this right of self-determination to every individual person, it would have to be done." (Liberalism, pp. 109–10)

"The situation of having to belong to a state to which one does not wish to belong is no less onerous if it is the result of an election than if one must endure it as the consequence of a military conquest." (Liberalism, p. 119)

"It makes no difference where the frontiers of a country are drawn. Nobody has a special material interest in enlarging the territory of the state in which he lives; nobody suffers loss if a part of this area is separated from the state. It is also immaterial whether all parts of the state's territory are in direct geographical connection, or whether they are separated by a piece of land belonging to another state. It is of no economic importance whether the country has a frontage on the ocean or not. In such a world the people of every village or district could decide by plebiscite to which state they wanted to belong." (Omnipotent Government, p. 92)

From an interview with Hans-Hermann Hoppe in the Austrian Economics Newsletter (AEN):

AEN: Was Mises better than the classical liberals on the question of the state?

HOPPE: Mises thought it was necessary to have an institution that suppresses those people who cannot behave appropriately in society, people who are a danger because they steal and murder. He calls this institution government.

But he has a unique idea of how government should work. To check its power, every group and every individual, if possible, must have the right to secede from the territory of the state. He called this the right of self-determination, not of nations as the League of Nations said, but of villages, districts, and groups of any size. In Liberalism and Nation, State, and Economy, he elevates secession to a central principle of classical liberalism. If it were possible to grant this right of self-determination to every individual person, he says, it would have to be done. Thus the democratic state becomes, for Mises, a voluntary organization.

AEN: Yet you have been a strong critic of democracy.

HOPPE: Yes, as that term is usually understood. But under Mises's unique definition of democracy, the term means self-rule or self-government in its most literal sense. All organizations in society, including government, should be the result of voluntary interactions.

In a sense you can say that Mises was a near anarchist. If he stopped short of affirming the right of individual secession, it was only because of what he regarded as technical grounds. In modern democracy, we exalt the method of majority rule as the means of electing the rulers of a compulsory monopoly of taxation.

Mises frequently made an analogy between voting and the marketplace. But he was quite aware that voting in the marketplace means voting with your own property. The weight of your vote is in accord with your value productivity. In the political arena, you do not vote with your property; you vote concerning the property of everyone, including your own. People do not have votes according to their value productivity.

AEN: Yet Mises attacks anarchism in no uncertain terms.

HOPPE: His targets here are left-utopians. He attacks their theory that man is good enough not to need an organized defense against the enemies of civilization. But this is not what the private-property anarchist believes. Of course murderers and thieves exist. There needs to be an institution that keeps these people at bay. Mises calls this institution government, while people who want no state at all point out that all essential defensive services can be better performed by firms in the market. We can call these firms government if we want to.