GET NEWS AND ARTICLES IN YOUR INBOXPrint
A
A
Home | Mises Library | Mises: An Audacious Champion of Freedom

Mises: An Audacious Champion of Freedom 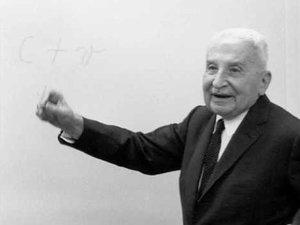 Tags Free MarketsWorld HistoryHistory of the Austrian School of Economics

Ideas are all-important. Indeed, they are more powerful than armies, as Victor Hugo noted. But ideas are advanced by specific individuals, and inculcated in them, and historically tied to them.

How blessed are we that we have not a criminal like Marx nor a monster, like Keynes to follow, but Ludwig von Mises, a hero as well as a genius.

Mises was not only a dazzling economist and champion of liberty, but no Communist, nor Nazi, nor central banker could pressure him into doing the wrong thing.

The grammar schools and gymnasiums he attended—super high schools in our terms—still have his records. He was recognized as extraordinary from the first.

Mises excelled as a student at the University of Vienna, earning a doctorate in economics and law. He wrote a book on housing policy before encountering Menger’s Principles and becoming an Austrian economist.

Mises clerked for judges and practiced law before getting a job as an economist at the professional housing association. While there, he demonstrated that high real estate taxes were hindering new construction, a serious problem in housing-short Vienna. Through his papers and lectures, that is, the pure power of his mind, he brought about a cut in taxes, leading to more investment in housing, exactly as he had predicted.

Mises was denied a paid position at the university, despite publishing his astounding Theory of Money and Credit. Before the founding of the Fed, he demonstrated that such a central bank would harm business and people to aid the government and its cronies, as well as bring on the business cycle of artificial booms followed by busts.

Mises was an army officer during the war, and we are privileged to have his medals at the Institute. At first, Mises was an economic advisor to the general staff. Then he was sent to the most dangerous duty in the war and almost killed. Guido Hülsmann, author of the great Mises biography, discovered that the power of Mises’s free-market analysis led to his corrupt and statist opponents hoping to kill him. There was a lot of money at stake. Still, the wounded Mises was decorated for bravery under fire, and as a great leader of men under brutal attack.

After the war, Mises secured a position as an economic advisor to the government for the Vienna Chamber of Commerce. He had been blocked from a position at the university by powerful socialists, and instead worked as a privatdozent and later a prestigious associate professor at the university, both unpaid positions. Unpaid or not, he used it to teach students and host his famous private seminar, which attracted top intellectuals from all over Europe. They remembered it as the most intense, rigorous, and fun experience of their academic lives.

Though working in effect two full-time jobs, Mises threw himself into his work as an economic advisor to call for a fully redeemable gold standard. The central bank was furious. It turned out that the then-current system allowed officials to have a secret slush fund for themselves and friendly economic journalists. The vice president of the central bank even hinted at a bribe for Mises if only he would be more accommodating to compromise. Of course, then and throughout his life, he never would.

The power of Mises’s influence as an economic advisor was shown in two more important ways. Austria threatened to follow Germany into hyperinflation. Almost singlehandedly his persuasion prevented a repeat in his country, if not of all inflation, of the speed and depth of the German catastrophe.

After the war, a coalition government, in part Marxist, came to power in Austria. Otto Bauer, a leader of the Austrian Social Democratic party and foreign minister, intended to introduce Bolshevism in Austria, but he listened to his old school chum Mises, something Bauer resented bitterly in later years.

Evening after evening, Mises persuaded Bauer and his equally Marxist wife that Bolshevism would mean mass starvation. Bauer was convinced.

All this time, Mises was also trying to do his scholarly work. And he did, while also paying full attention to his day job. In what would normally be his leisure time, for example, he wrote first his world historic article and then his book on Socialism. Just after the establishment of Bolshevism in Russia, he proved that with no private property in the means of production, socialism would be a chaotic and poverty-producing disaster. No planning board could substitute for property and market. Tragically for the world, it took decades before socialists would admit, after his death, “Mises was right.”

But the evil of statism also grew from another direction, and Mises was the first to see what was in store for Austria with the National Socialists. Many colleagues credited him with saving their lives, because they left in time. In 1934, Mises secured the first and only paid professorship of his life, at the International Graduate School in Geneva. It was a happy time for Mises, who lectured in accentless French and wrote in German. But by 1940, it was getting very uncomfortable in Switzerland.

Already in 1938, the invading Nazis had ransacked his Vienna apartment, and stolen his library and papers. Mises and his wife Margit—later first chairman of the Mises Institute—decided to go to America.

They crossed France barely in front of advancing German troops, just making it into neutral Portugal and a ship to New York. Once here, in an academic community offering professorships to all the European Marxists and Keynesians, there was nothing for the “Neanderthal,” “reactionary,” and “caveman” Mises. The intellectual climate of the New Deal was bitterly hostile. Even when the libertarian Volker Fund offered to pay his entire university salary, Mises was shunned for defending freedom and capitalism.

Finally, businessman Lawrence Fertig, later a benefactor of the Mises Institute, was able to persuade NYU, where he was on the board, to allow Mises to be an unpaid, permanent “visiting professor.” Even so, Keynesian deans gave him the worst offices and class hours, and tried to persuade students not to take his courses.

Yet, though in a new country at almost sixty, of whose language he had only a reading and writing knowledge to begin with, Mises was undefeated. He restarted his weekly seminar, attracting such participants as Henry Hazlitt, Ayn Rand, and Murray Rothbard. Important business leaders, journalists, and financiers audited his classes. This drove other professors, said Robert Nozick, wild with envy.

But Mises, never compromising his principles, just moved ahead, uncomplaining, undismayed, and unhindered. And it was in the 1940s that Mises completed his monumental treatise Human Action, in which he reconstructed all of economic analysis on a sound individualistic foundation.

Any of the books I’ve mentioned—and he wrote many more—would be a significant lone achievement for a lifetime. It was one of the great moments of my life to have dinner with Mises and his wife while serving as his editorial assistant. He was eighty-six, and magnificent. I can testify that Rothbard was right: he was trailing clouds of glory from a lost and better civilization: pre-WWI Vienna. In looks, speech, dress, bearing, and manners, he was a great European gentleman.

Because Mises was intransigent on matters of principle, some of his critics have denounced him as “obnoxious”! He might have had reason, but as Rothbard, Hazlitt, Hayek, Fertig, Leonard Read, and so many others confirmed to me, he was kind, funny, and generous, no matter what he was put through. He was especially good with students. Or to a twenty-three-year-old kid helping bring some of his books back into print, as well as to publish a new paper.

In the years after he died in 1973, I worried that his scholarly work was being neglected, as well as his moral stature, and the Austrian school was shrinking. We all need heroes, and he was a great one. So in 1982, I asked his widow for her blessing to start a Mises institute, and asked her to serve as our chairman. She was already a “one-woman Mises industry,” in Murray’s words, and she was thrilled.

Thanks to you and all our donors, our scholars and students, our supporters and readers, my fears have not come true. Today, the Austrian school is worldwide and growing in influence. Mises is increasingly recognized for the creator and hero that he was.

As we carry the banner of Mises and the Austrian school, there is increasing interest in socialism. Keynesianism remains the official ideology of the regime. We have our work cut out for us. But despite everything, we are making great progress with young people here and around the world.

They know they are being fed honeyed lies. They don’t trust the professors who might as well be White House propagandists. And the political correctness on campus and social media repels every person of taste, intelligence, and judgment. Our young people, and our faculty, will not be silenced, and with your help, neither will we.

We not only honor Mises, and the greatest Misesian, Rothbard, we try to emulate the men they were, and the example of lives well and truly lived, no matter what the obstacles.

Won’t you help us to do so? Your most generous and tax-deductible donation would be magnificent. We have young people to teach, scholars to encourage, books and journals to publish, a great library and archives to maintain, and ideals to advance. How the world needs them. How the future needs them.