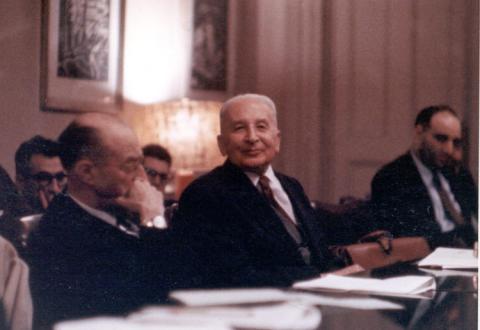 [From The Essential von Mises]

Included in The Theory of Money and Credit were at least the rudiments of another magnificent accomplishment of Ludwig von Mises: the long-sought explanation for that mysterious and troubling economic phenomenon—the business cycle. Ever since the development of industry and the advanced market economy in the late eighteenth century, observers had noted that the market economy is subject to a seemingly endless series of alternating booms and busts, expansions, sometimes escalating into runaway inflation or severe panics and depressions. Economists had attempted many explanations, but even the best of them suffered from one fundamental flaw: none of them attempted to integrate the explanation of the business cycle with the general analysis of the economic system, with the “micro” theory of prices and production. In fact, it was difficult to do so, because general economic analysis shows the market economy to be tending toward “equilibrium,” with full employment, minimal errors of forecasting, etc. Whence, then, the continuing series of booms or busts?

Ludwig von Mises saw that, since the market economy could not itself lead to a continuing round of booms and busts, the explanation must then lie outside the market: in some external intervention. He built his great business cycle theory on three previously unconnected elements.

1. One was the Ricardian demonstration of the way in which government and the banking system habitually expand money and credit, driving prices up (the boom) and causing an outflow of gold and a subsequent contraction of money and prices (the bust). Mises realized that this was an excellent preliminary model, but that it did not explain how the production system was deeply affected by the boom or why a depression should then be made inevitable.

2. Another element was the Böhm-Bawerk analysis of capital and the structure of production.

3. A third was the Swedish “Austrian” Knut Wicksell’s demonstration of the importance to the productive system and the prices of a gap between the “natural” rate of interest (the rate of interest without the interference of bank credit expansion) and the rate as actually affected by bank loans.

From these three important but scattered theories, Mises constructed his great theory of the business cycle. Into the smoothly functioning and harmonious market economy comes the expansion of bank credit and bank money, encouraged and promoted by the government and its central bank. As the banks expand the supply of money (notes or deposits) and lend the new money to business, they push the rate of interest below the “natural” or time preference rate, i.e., the free-market rate which reflects the voluntary proportions of consumption and investment by the public. As the interest rate is artificially lowered, the businesses take the new money and expand the structure of production, adding to capital investment, especially in the “remote” processes of production: in lengthy projects, machinery, industrial raw materials, and so on. The new money is used to bid up wages and other costs and to transfer resources into these earlier or “higher” orders of investment. Then, when the workers and other producers receive the new money, their time preferences having remained unchanged, they spend it in the old proportions. But this means that the public will not be saving enough to purchase the new high-order investments, and a collapse of those businesses and investments becomes inevitable. The recession or depression is then seen as an inevitable re-adjustment of the production system, by which the market liquidates the unsound “over-investments” of the inflationary boom and returns to the consumption/investment proportion preferred by the consumers.

Mises thus for the first time integrated the explanation of the business cycle with general “micro-economic” analysis. The inflationary expansion of money by the governmentally run banking system creates over-investment in the capital goods industries and under-investment in consumer goods, and the “recession” or “depression” is the necessary process by which the market liquidates the distortions of the boom and returns to the free-market system of production organized to serve the consumers. Recovery arrives when this adjustment process is completed.

The policy conclusions implied by the Misesian theory are the diametric opposite of the current fashion, whether “Keynesian” or “post-Keynesian.” If the government and its banking system are inflating credit, the Misesian prescription is (a) to stop inflating posthaste, and (b) not to interfere with the recession-adjustment, not prop up wage rates, prices, consumption or unsound investments, so as to allow the necessary liquidating process to do its work as quickly and smoothly as possible. The prescription is precisely the same if the economy is already in a recession.