Milton Friedman and the Human Good 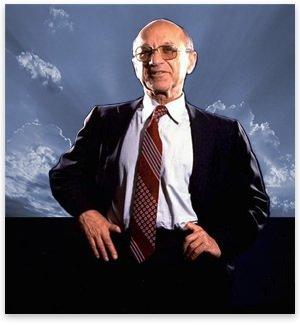 06/07/2010Tibor R. Machan
Milton Friedman has argued that the crucial question that anybody who believes in freedom has to ask himself is whether to let another man be free to sin. If you really know what sin is, if you could be absolutely certain that you had the revealed truth, then you could not let another man sin. You have to stop him.1

He also wrote, in Capitalism and Freedom,

The liberal conceives of men as imperfect beings. He regards the problem of social organization to be as much a negative problem of preventing "bad" people from doing harm as of enabling "good" people to do good; and, of course, "bad" and "good" people may be the same people, depending on who is judging them.2

It is well known that Friedman was a champion of human liberty and he denied that we can "really know what sin is" since he couldn't champion liberty "if you could be absolutely certain that you had the revealed truth," in which case "you could not let another man sin."

I wish to consider whether this skeptical stance on "sinning," or virtue and vice, is correct, and if not, whether it follows that liberty must be sacrificed and we "could not let another man sin." I also wish to argue that Friedman's subjectivist stance on "'bad' and 'good' people" is misguided.

First, then, what is it that Friedman had in mind by "sinning?" Without committing to a religious viewpoint, the term "sinning" can mean doing something wrong, immoral, unethical, and this is the sense in which Friedman appears to have used the term. He argues that if one absolutely knows that another is doing something immoral, unethical, morally or ethically wrong, then one has to stop this person. But why would one hold this view?

The main reason is that it is everyone's responsibility to promote the good and Friedman accepted this while also denying that one can know the good. So, supposedly, if one is failing to do what is good or is doing what is not good, and another knows this and has the opportunity to remedy matters, the obligation to promote the good would impel one to do just what Friedman suggests — namely, interfere with the agent, stop the individual from sinning or make him or her do what is right.

This is the view that would follow from the belief that in the case of human moral agents, what counts for most is whether they produce something good or fail to do so. An action is then judged good or bad on the basis of whether some result is being promoted or not promoted, produced or not produced.

Thus, say, someone is morally obliged to produce greater health in the world than there exists now. Such a person would be doing good or the right thing by bringing about greater health than would otherwise exist. This is a consequentialist view of goodness — goodness lies in certain consequences (and badness in others) that human beings can bring or abstain from bringing about.

"Morally significant action has to be freely chosen."

Someone behaves in a certain way and this happens to bring about a result that is good, although that is not what the agent intended to do. Yet by Friedman's account of good actions, this person is doing good. But doing good cannot amount to producing something good by accident. No one can be credited with good deeds that are good by virtue of having results that are accidentally good.

So as to avoid this result one would need to reject Friedman's position and embrace one quite different from it. One bonus of doing so would be a way to preserve human liberty without the paradoxical skepticism of Friedman.

This skepticism is paradoxical because Friedman evidently considered respecting other people's sovereignty, self-rule, a good thing. He evidently thought not intruding on others, not robbing them of their freedom of action is something valuable, even morally praiseworthy.

Why else prefer the free to an unfree society? If that preference isn't something arbitrary, a matter of, say, flipping a coin, it must have some justification. And that would be a sound moral or ethical argument. It could not produce the kind of paradox found in Friedman's position, which combines moral skepticism with the belief in the morality of respecting other people's sovereignty or independence.

Such a view is available provided the idea of the human good that is valid is one that ascribes to people free will, the capacity to choose between right and wrong conduct, and conceives of morally worthy conduct as chosen, not anything accidental. By this approach we can know what is the right or wrong thing for others to do but it would be a non sequitur to infer from that knowledge the authority to force them to act accordingly. Right and wrong conduct would need to be freely chosen.

To put it differently, morally significant action has to be freely chosen, not mere proper behavior.

Of course the ascription of free will to people is, and has always been, quite controversial. If, however, criticism of human conduct is ever to be valid, even intelligible, there has to be something to the idea that people have free will. This is so even if the criticism addresses only their logic or grammar or manners. To fault someone for bad reasoning assumes the person might have engaged — had been free to engage — in sound reasoning instead.