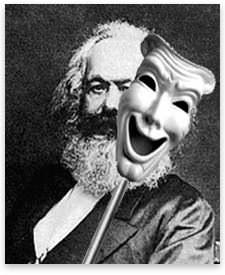 In June and July 1952, Ludwig von Mises delivered nine lectures in San Francisco on Marxism and capitalism. Bettina Greaves transcribed these lectures, and she has done us a great service in making these lectures available to the public. They display Mises's unparalleled insight, and even experienced students of him will learn much from what he says here.

Fashionable Western Marxists such as Erich Fromm have stressed Marx's humanism, principally on display in his early manuscripts, but Mises sees Marx differently. For him, Marx embraced a crude version of materialism:

According to Marx, everybody is forced — by the material productive forces — to think in a way that the result shows his class interests. You think in the way your "interests" force you to think… Your "interests" are something independent of your mind and your ideas. Consequently the production of your ideas is not truth. Before the appearance of Karl Marx, the notion of truth had no meaning for the whole historical period. What the thinking of the people produced in the past was "ideology," not truth. (p. 6)

Mises locates a contradiction in Marx's theory that, so far as I am aware, has escaped other critics. Marx contended that class interests determine a thinker's ideas. He also maintained, though, that these ideas directly reflect the material productive forces. But these two accounts by no means come to the same thing:

(1) The interpretation he [Marx] gives to Descartes is that he was living in an age when machines were introduced and, therefore, Descartes explained the animal as a machine; and (2) The interpretation that he gave to John Locke's inspiration — that it came from the fact that he was a representative of bourgeois class interests. Here are two incompatible explanations for the source of ideas. (p. 6)

In his discussion of materialism, Mises makes in passing a brilliant remark:

No materialist philosopher ever fails to use the word "simply" [as in, "thoughts are simply secretions of the brain"]. That means, 'I know, but I can't explain it'. (p. 3)

Economics of course lies at the heart of Marxism, and Mises expertly exposes Marx's key errors. Marx claimed that he had discovered the "law of motion" of capitalism, just as Newton had discovered the laws of motion in physics. The value of a commodity under capitalism depends on the socially necessary time required to produce it. This applies to labor as well: the value of labor depends on how much labor is required to keep a laborer alive and able to work. But, in return for paying this amount, the capitalist employer obtains the worker's labor power. He must work for the capitalist a certain number of hours; and, in that time, he expends labor, the source of value. If the amount of labor he expends exceeds what the employer has paid him, the employer makes a profit.

This famous exploitation theory of profit rests, as Mises points out, on the "iron law of wages." If wages rise above subsistence, population increases will drive them back down again. The rising standard of living in England in Marx's own day, as capitalism continued to develop, falsified the iron law, but Marx ignored this.

Mises finds another problem with this part of Marx's theory:

If you think it is absolutely impossible under the capitalist system for wages to deviate from this rate [of subsistence], then how can you still talk, as Marx did, about the progressive impoverishment of the workers as being inevitable? There is an insoluble contradiction between the iron law of wage rates … and his philosophy of history, which maintains that the workers will be more and more impoverished until they are driven to open rebellion, thus bringing about socialism. Of course both doctrines are untenable… What is amazing is that, during the century since Marx's writings, no one has pointed out this contradiction. (p. 13)

Mises resolves a question that has long puzzled me. Marx thinks that when socialism arrives, people will no longer be subjected to the division of labor. How can he believe this? Surely his extensive knowledge of economic history must have taught him that civilization cannot exist without the division of labor.1 Mises contends that Marx read the history of technology in a different way:

Marx didn't take into account the evolution of mankind above the level of very primitive men. He considered unskilled labor to be the normal type of labor and skilled labor to be the exception. He wrote in one of his books that progress in the technological improvement of machines causes the disappearance of specialists because the machine can be operated by anyone; it takes no special skill to operate a machine. Therefore the normal type of man in the future will be the non-specialist. (p. 14)

Again and again Mises draws from his extraordinary knowledge to make illuminating remarks. He says, e.g.,

In French, the words "organize" and "organizer" were unknown before the end of the eighteenth century or the beginning of the nineteenth century. With regard to the term "organize," Balzac observed "This is a new-fangled Napoleonic term. This means you alone are the dictator and you deal with the individual as the builder deals with stones." (p. 45)

I have concentrated in this review on Mises's analysis of Marxism, but four of the lectures deal with capitalism. I shall confine myself to two important remarks Mises makes about Austrian business-cycle theory. First, he does not claim that the theory accounts for all business fluctuations:

We do not mean economic crises brought about by some obvious event that makes it possible to explain the emergence of this crisis … [such as the crisis in Europe when the Civil War prevented cotton exports]. We do not deal with such crises due to a definite identifiable situation. We deal with a genuine crisis in all branches of business — although it is sometimes worse in some branches than in others — a crisis for which people couldn't see any special reason. (p. 69)

Mises's second remark is of vital importance today, when, in our present troubles, cries for bailout and stimulus abound. Mises says, by contrast, that all expansion of bank credit must absolutely cease: "no more legal tender banknotes and no more credit expansion!" (p. 75, emphasis in original).

I cannot resist one more of Mises's brilliant remarks:

Hegel was the man who destroyed German thinking and German philosophy for more than a century, at least. He found a warning in Immanuel Kant … who said the philosophy of history can be written only by a man who has the courage to pretend that he sees the world with the eyes of God. Hegel believed he had the "eyes of god," that he knew the end of history, that he knew the plans of God. (pp. 8–9)

I have noted a few mistakes in the text: The reference to those who interpreted history as the history of technology cannot have been to Leopold von Ranke: this was not his view (p. 5). "Albrecht von Heiler" should be "von Haller" (p. 6). Mannheim's sociology of knowledge grew out of Marx's ideas, not Hitler's (p. 7). "Darwin's Origin of the Species" should be "Origin of Species" (p. 14). The abbreviation for "dialectical materialism" is "diamat," not "diamet" (p. 15). Bergson's élan vital does not mean "myths, fairy tales, and legends" (p. 30). "House of Orange" should be "House of Orléans" (p. 30). The famous book of Friedrich Lange was The History of Materialism, not The History of Marxism (p. 43).

David Gordon covers new books in economics, politics, philosophy, and law for The Mises Review, the quarterly review of literature in the social sciences, published since 1995 by the Mises Institute. He is author of The Essential Rothbard, available in the Mises Store. Comment on the blog.