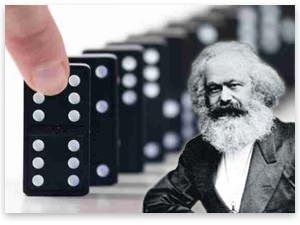 [This article is excerpted from volume 2, chapter 10 of An Austrian Perspective on the History of Economic Thought (1995). An MP3 audio file of this chapter, narrated by Jeff Riggenbach, is available for download.]

Karl Marx had a crucial problem. He was not interested, as were the scorned "utopian" socialists, in merely exhorting everyone to adopt the communist path to a perfect society. He did not propose to leave the attainment of communism to the imperfect free wills of mankind. He demanded a certain, "inevitable" path, a "law of history" that would demonstrate the absolute inevitability of history's reaching its final glory in a communist society. But here he was at a disadvantage relative to the various Christian wings of messianic communism: for, unlike them, there was here no inevitable Messiah to arrive and usher in a Kingdom of God on earth. As in the case of the postmils, however, it was up to mankind, rather than the Messiah, to establish the Kingdom. Even without a Messiah, a vigilant and growing vanguard could establish the Kingdom; and the vanguard could even help in various premil versions of millennialism. So that leadership by a dedicated vanguard was very much in the messianic tradition.

As Professor Tucker points out, Marx was not lacking a moral theory. He was definitely a moralist, but a highly curious one. In his "mythic vision," the "good," the "moral," consists of participating in the inevitable triumph of the proletarian revolution, while the "bad," or "immoral," is trying to obstruct it.

The answer to the question as to what should be done is given in the mythic vision itself, and can be summed up in a single word: "Participate!" … So Marx … says that it is not a matter of bringing some Utopian system or other into being (i.e. of defining a social goal and purposefully endeavoring to realize it) but simply of "consciously participating in the historical revolutionary process of society which is taking place before our very eyes."1

Thus, to be moral means to be "progressive," to be in tune with the inevitable future workings of the laws of history, whereas the harshest condemnation is reserved for those who are "reactionary," who dare to obstruct, even with partial success, such allegedly predestined turns of events. Thus Marxists are particularly vehement in denouncing revolutionary moments in which the existing rule of "progressives" is replaced by "reactionaries," and the clock is, miraculously, in the metaphor of historicist inevitability, "turned back." For example: the Franco revolution against the Spanish republic, and Pinochet's overthrow of Allende in Chile.

But if a certain change is truly inevitable, why is it important for human agency to lend a hand, indeed to struggle mightily on its behalf? Here we turn to the critical matter of timing. While a change may be inevitable, the intervention of man can and will speed up this most desired of happenings. Man can function, in one of Marx's favorite obstetrical metaphors, as a "midwife" of history.2 Man's intervention could give the inevitable a helpful push.

Yet, Marx's obstetrical analogies are only a feeble attempt to evade the self-contradiction between the idea of inevitability and action to achieve the inevitable. For according to Marx, the timing as well as the nature of events is determined by the material dialectic of history. Socialism is brought about, wrote Marx in Capital, by the "operation of the immanent laws of capitalistic production itself. As von Mises points out, to Marx

Ideas, political parties, and revolutionary actions are merely superstructural; they can neither delay nor accelerate the march of history. Socialism will come when the material conditions for its appearance will have matured in the womb [obstetrics again!] of capitalist society, neither sooner or later. If Marx had been consistent, he would not have embarked upon any political activity. He would have waited quietly for the day on which "the knell of private capitalist property sounds."3

Marx might not have been logical or consistent, but his attitude was squarely in the millennialist tradition. As Professor Tuveson points out:

Several characteristics of historical Communist movements recall millenarian agitations. There is, for one, the well-known fanaticism of millenarian believers … The firm conviction that a sequence of events, leading to universal redemption, is ordained (or "determined") would seem to lead to passivity on the part of an individual … But, characteristically, there is a vitally important qualification. Although the series of events is prophesied, their timing may be retarded by the failure of mankind. To delay the coming of redemption, then, is a great sin, against one's fellow beings, against posterity, against the power that has ordained events. But whole-hearted, zealous participation in the historically determined duties, doing what the old millenarians would call "doing God's will," gives special éclat. In most millenarian groups there is something corresponding to the "Communist Party." In Revelation itself there are the hundred and forty-four thousand, "the first fruits unto God and to the Lamb," who are without guile, for they are "without fault before the throne of God." (Revelation XIV:4–5). Thus, the whole proletariat, like the whole body of the saved, is without damning fault, but the specially distinguished group … are chosen from the chosen.4

But there was still a remaining problem: whence comes the inevitability in the Marxian schema? The proof that his cherished communist ideal would inevitably, "scientifically" arrive, would occupy Marx for the rest of his life. Certainly, he found the outlines of such proof in the mysterious workings of the Hegelian dialectic, which he bent to his use.