The Life of Carlo Ponzi 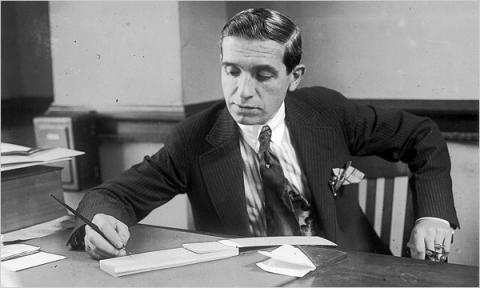 As the legend goes, the scheme that would make Carlo Ponzi a household name occurred to Carlo when he was a young man. Carlo would sit on his front steps in Boston and watch his neighbors return home from a day's work. It was during one of these daydreaming sessions that his innovation struck. Predictably enough, the first victim of what would become known as the Ponzi Scheme was Carlo's friend Tony. Carlo made an intriguing offer: if Tony lent him $20, Carlo would return $30 in ninety days. "I'll meet you right here and pay you 50 percent on your money."

If only Tony hadn't taken Carlo up on his offer. But he did. And the next day, so did Carlo's friend Guiseppe. So, ninety days later, true to his word, Carlo met with Tony and presented him with his $30. Perhaps like most of us, Tony let his worst half get the better of him and told Carlo, "What the hell, keep it and give me another 50 percent interest in ninety days." And the Ponzi Scheme was born. Guiseppe, the second-generation sucker, subsidized Tony, the first.

Before young Carlo Ponzi pioneered in financial chicanery, he had already led an interesting--and criminal, to anyone who should have bothered to check--life. Immigrating from Italy at the age of 17, Carlo soon found an alternative to dishwashing and waiting on tables: he would assist his fellow Italian immigrants in sending money back to the home country. But when it was discovered that Carlo was pocketing a generous portion of the funds, he was sentenced to three years in prison.

Perhaps illustrating the observation that government incarceration simply educates more criminals, instead of learning a lesson from his imprisonment, Carlo, once released, began plying his entrepreneurial skills smuggling Italian immigrants into the U.S. from Canada. Nabbed again, Carlo was off to prison for another three years. Setting his mind on going straight, Carlo then moved to Boston and found a job as a $16-a-week clerk. Soon thereafter he met and married Rose Guecco, seeing her as someone willing to take a two-time loser, and Rose had faith that her Carlo would one day rise to the $25-a-week pay bracket.

Now around this time, the "war to end all wars" was coming to an end in Europe, and the boom of the Roaring Twenties was just beginning. Wages were rising and malinvestment was charging ahead, driving an emerging speculative investing craze. And Carlo knew he didn't like working for a living; watching his neighbors trudge home day after day from work as he sat on his Boston stoop only further convinced him that he needed a scheme to get ahead. He thought and thought on that stoop, and, as we know, Carlo came up with quite a scheme.

With the success he experienced with Tony and Guiseppe, Carlo started Securities Exchange Company at 27 School Street in Boston the day after Christmas 1919. Advertising a 50-percent return in ninety days, money from investors large and small poured in.

With all this money pouring in, Carlo had to figure out a plausible explanation for how he could pay 50-percent interest in ninety days when no place in the world paid that much. But Carlo's ingenuity for scams came through again. He told investors that he had a network of agents in Europe that purchased depreciated European currencies, converting the currencies into international postal coupons, which were then redeemed at face value in the United States in U.S. dollars. Carlo claimed all the high rollers were doing it--the Rockefellers, J.P. Morgan, Jr., everybody. But Saint Carlo instead was sharing the wealth and helping the common man (while helping himself of course). Redistributing their money was more like it.

Every day, tens of thousands of dollars were deposited with Carlo's tellers. Outside the building, crowds lined up, waiting to invest. And every day, Carlo would arrive at work in his chauffeur-driven limousine. The key to the entire scheme continued to work its magic, as the deposit counters were usually a swarm of activity, and the withdrawal counters were practically deserted. As the deposits grew and grew, Carlo even opened branch offices, eventually totaling thirty-five. He also used some of the deposits to purchase two actual businesses, Hanover Trust Co. and J.P. Poole Co. Carlo even found time in his busy schedule to buy Rose a mansion.

It wasn't long, however, before Carlo's claims attracted attention from the wrong people. In a few short months, he had transformed himself from a mere clerk to a veritable financial wizard, he and Rose were swaddled in luxury, and anyone who wanted to cash in immediately received their deposit with interest--no questions asked. Carlo's success invited scrutiny. The U.S. Postal authorities advised the federal government that Carlo's given explanation for how the Securities Exchange Company conducted its "investments" couldn't possibly work.

But since the federal government operates on its own concept of time, it wasn't until months later that the feds conducted an official audit of Carlo's operation. And as news of the audit hit the street, the whiff of insecurity began to work its magic, creating a run on the Securities Exchange Company. But it seemed as though Carlo had an inexhaustible supply of cash: all of the investors who lined up to withdraw their deposit each received their cash plus 50 percent.

And as the audit progressed, the auditors were stumped. The company kept meticulous records of all deposits and withdrawals. No one was being cheated, and no law had been broken. The only thing that they couldn't find was how the company made its fantastic profits. When asked, Carlo indignantly replied that that was a company secret.

The feds responded to this by placing a restraining order on the company, prohibiting it from accepting any further deposits while the investigation was proceeding. Carlo, glimpsing impending doom, hired the well-respected William McMaster to handle public relations until the investigation blew over. This move didn't turn out so well for our friend Carlo. Shortly after being hired, McMaster issued a statement to the press that the Securities Exchange Company had never--not even once--conducted a single foreign financial transaction.

Again, investors created a run on Carlo's company, and again, Carlo appeared to weather the storm, even serving coffee and donuts to depositors as they waited. But eventually the toll of the investigation and revelations took their course, and more and more investors showed up to withdraw their money, until eventually the money ran out. On August 9, 1920, Carlo's bank issued a statement that it could no longer honor checks from the Securities Exchange Company. Two days later, Carlo's criminal record was released to the public.

Panic now gripped those investors who held back, and Carlo feared for his life. He asked for and received police protection. And one by one, his assets were seized. First to go were Rose's mansion and their three luxury cars. Then Hanover Trust and J.P. Poole. As the investigation progressed, investigators discovered that Carlo at his height had 40,000 investors, and the total take was nearly $15 million--and this was back when hotdogs cost a nickel.

On October 21, 1920, Carlo, now penniless, was sentenced to five years imprisonment for embezzlement. Released in 1924 and faced with further charges, he was again imprisoned, this time for nine years.

Out again in 1934, Carlo was deported to Italy, where, sizing up a sucker if he ever saw one, he quickly offered his services to Mussolini. Once hired, Carlo dispelled any confidence in his claim to be any sort of financial wizard and was soon fired by Il Duce. Carlo next turned up with an Italian airline and was sent to Rio de Janeiro. Carlo had no sooner than arrived to take up his new duties when the airline abruptly folded.

Stranded in Rio, Carlo Ponzi would end his days penniless, nearly blind, and partially paralyzed. He died in a charity ward in Brazil in 1949.

As we all know, however, this would not be the end of the Ponzi Scheme. Carlo Ponzi's spirit, if not his ghost, would live on under the tutelage of, not the marketplace, but the state. Though Ponzi's great reputation as a financial wizard was tarnished and tattered, other men would come along to claim his mantle. Instead of falling into obscurity, the criminal scheme of a poor boy from Italy would be institutionalized as a system of deceit and privilege and thereby expanded into a racket the size and scope of which --with ingenious and elaborate rationalizations, not to mention decades-long duration--Carlo Ponzi surely couldn't have dared imagine.

The Social Security Act was ostensibly a fund to pay pensions, but it doubled as a hidden tax to fund a Treasury reserve fund for the purpose of cloaking tax increases and higher government spending. "Contributors" to Social Security do not receive the returns from the money they paid into the "fund" in the past. Rather, just as in a Ponzi Scheme, they are paid from the funds of current contributors (taxpayers), and these taxpayers will in turn be paid from the taxes paid by the generation that follows them. In other words, its purpose is the redistribution of income, not investment toward the production of new wealth.

Needless to say, the temptation to consume today what is due tomorrow is irresistible to politicians. Tax money is always spent. The essential deceits that lay behind Social Security are of course even more evident today. The so-called budget surpluses of the Clinton '90s exist solely as an accounting shell game in which surplus revenues generated from Social Security taxes are deposited with the U.S. Treasury and included as part of the general tax-revenue fund. In return, IOU's are then issued by the Treasury to the wildly misnamed Social Security Trust Fund. The IOU's are then not counted as liabilities in the federal debt and are not counted in the official U.S. budget.

The plan was to make the payroll tax big enough to pay the benefits, plus enough more to create a so-called reserve of $47,000,000,000 in 40 years. It was given the fraudulent name of Old-Age Reserve Fund. The Security Board would collect the taxes each year, use a small part of it to pay the pensions and put the rest in the "Fund." That is, it would lend it to the Treasury and the Treasury would then spend it for any purpose it had in mind. At the end of 40 years, Roosevelt was told, this money could be used to pay off the national debt.

This was sixty-five years ago, and of course the deceit of Social Security allowed the accumulation of ever more debt, rather than the retirement of it, and the creation on an enormous "off-budget" slush fund.

The fact that Carlo's scheme lasted less than a year--and was exposed by his own PR man--while the government's Ponzi scheme has lasted through good times and bad, for more than half a century, only suggests that while Carlo Ponzi's brilliance lay in the creation of ingenious scams, perhaps he should have plied his talents as a politician, where he could've fleeced his victims legally.